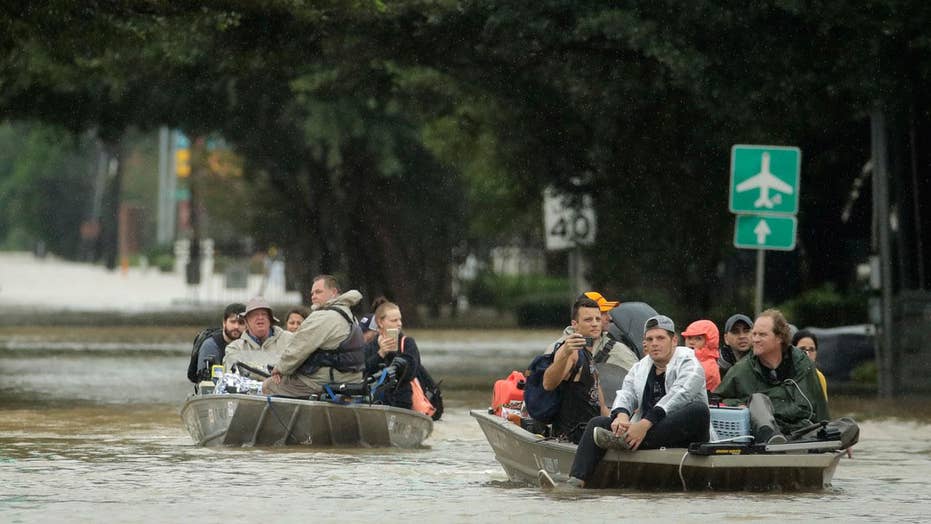 America is reeling from the onslaught of Hurricane Harvey. In the midst of the suffering from the unparalleled flooding, we have seen remarkable examples of heroism and community coming to the aid of those in peril.

Americans have been enduring for weeks media, the political class and their operatives malevolently insisting that all of America is hopelessly racist and its president a facilitator of white supremacists, so watching Texans helping their stricken neighbors has been a good reminder of who we, as Americans, really are.

This is a small silver lining of a horrible event, as various malcontents continue to push on with their attempts to cast America as irredeemably irredeemable.

Warnings of a “slippery slope” are often heard, especially when extremists demand the removal of statues they deem offensive. There are very sincere people calling for the removal of Confederate statues, but the organized left behind the hysteria are self-styled Marxists, specifically the World Workers Party, and anarchists, like Antifa.

Attacks on a variety of cultural symbols is necessary to send a message that America was born of racism, is still racist and must be dismantled.

Their concerns are not racism or even being offended; their goal is to condemn the United States and capitalism. For them, the only way to remake society is to rebuild it from ashes.

Attacks on a variety of cultural symbols is necessary to send a message that America was born of racism, is still racist and must be dismantled.

ESPN removing a sportscaster named Robert Lee from working a University of Virginia game to avoid imagined backlash, is now infamous. It was also so incomprehensible many, including this columnist, simply didn’t believe it. It was true, and a sign of how perceived public pressure as promulgated by media, and the fear of violence, produces a mass hysteria that facilitates the craven Marxist agenda embraced by so few.

We also now have what is known as the “Traveler Mascot Controversy.” You see, the University of Southern California’s mascot’s horse has a name similar to Robert E. Lee’s horse, ergo, Traveler must go. Free Beacon reports, “Saphia Jackson, USC’s Black Student Assembly co-president, accused Traveler IX last week of being a symbol of white supremacy, and said it should be removed from campus.”

The good news is someone is standing up to this absurdity: “An acclaimed sports broadcaster [Brent Musberger] said Sunday on Barstool Sports’ podcast ‘Pardon My Take’ that he would not vote for University of Southern California quarterback Sam Darnold to receive the Heisman Trophy if the university were to change its mascot’s name,” The Washington Free Beacon reported.

But let’s not stop there. A writer at Salon, a far-left website, has declared, according to The Daily Caller, that “The Star-Spangled Banner” is America’s national anthem because “neo-Confederates elevated” the song “as a way of honoring Southern slaveowners’ rebellion.” The reasoning behind all this, the writer attests, is due to the “popular awakening” reflected in the demand to remove offensive statues.

Not everything is as camera-ready as the defacing, beheading and tearing down of statues. After featuring the iconic American film, “Gone with the Wind” for 34 years, a Memphis theater announced it will no longer screen the film once a year at its festival.

The New York Times noted the theater was removing it due to its “insensitive” nature and because of a “heated” online discussion. The decision was met with even more discussion, online and in the press.

The good news in all of this bullying by a few hostile Marxists, who can organize online, are the facts of the matter. Mr. Nolte points out that 73 percent of African-Americans “rank ‘Gone With the Wind’ as a good/very good movie? That is only 14 points lower than whites. Our media would never tell you that. Doesn’t fit the narrative.”

Moreover, in the wake of Charlottesville, the Federalist reported that a new poll “shows that most Americans, including a plurality of African-Americans, don’t agree with efforts to tear down Confederate statues. According to a new poll conducted by Marist for NPR/PBS News Hour, 62 percent of Americans want the statues to stay where they are.”

One message for all of us is to not let volume or intensity of news coverage dictate reality. These issues are complex even without agitation from leftists who have no one’s best interests in mind. Having serious discussions about who we are as Americans has allowed us to become better people. If we acquiesce to a small cadre of leftist bullies and censors, they’ll not only wipe away the past, the future is gone as well.