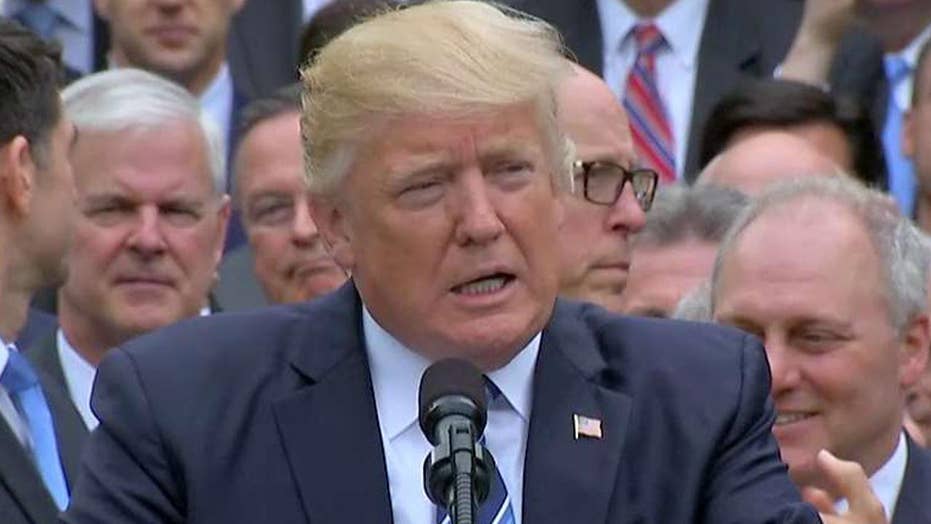 Trump: This is a repeal and a replace of ObamaCare

While Republicans have campaigned on this issue for nearly a decade though, Thursday’s replacement bill is as bad if not worse than the bill’s first iteration and even further, it’s DOA in the Senate.

The bill now includes with two controversial amendments authored by Representative Tom MacArthur and Fred Upton. As described by Speaker Ryan’s Press Office, the MacArthur Amendment “gives states flexibility in addressing premiums and best serving their populations,” while the Upton Amendment provides “an additional protection for people with pre-existing conditions in states seeking that flexibility.”

The impact of these amendments is more pernicious however. These hasty changes, which show how desperate for legislative victory President Trump truly is, threaten coverage for Americans with preexisting conditions, as well as all patients’ coverage for the critical categories of services defined in ObamaCare’s Essential Health Benefits.

In particular, by allowing states to seek waivers to weaken ObamaCare components, the MacArthur Amendment puts millions of Americans at great risk of losing their insurance.

In terms of the Upton amendment’s impact, its additional $8 billion in funding over five years for states to create high-risk pools only puts a band-aid on a serious problem.

Critics of the AHCA on both sides of the aisle insist that $8 billion is not nearly enough funding to successfully nor adequately cover all patients with preexisting conditions.

Above all, the faulty bill’s passage in the House underscores the leadership imperative the Republican Party is facing.

Although the AHCA could bring a harbinger of problems for Donald Trump, Republicans critically needed to pass some form of legislation promised to their constituents before advancing onto tax reform, infrastructure investment, and other much-needed economic reforms.

To pass the AHCA through the Senate, as well as to avoid electoral defeat in 2018 in the way Democrats lost in 2010 and 2014, the Republicans will need to compromise.

Considering how exasperating it has been for President Trump, Speaker Ryan, and the Republican Party as a whole to push through their signature legislation promise of repeal-and-replace through, the outlook is grim for any upcoming legislation.

On the other side of the aisle, Democrats and the so-called “resistance” now have the opportunity for presenting a clear, effective alternative policy agenda to 2018 midterm voters.

Rather than resist the president at every step, the Democrats in the Senate must now proactively find a way to not only minimize the estimated tens of millions of Americans who will lose their health care, but also rescue some vestiges of President Obama’s landmark health bill.

At the very least, by working to improve, not replace ObamaCare, Democratic leaders can ensure that patients with preexisting conditions keep their coverage and that all Americans can feel secure with a model insurance plan that covers essential categories of services.