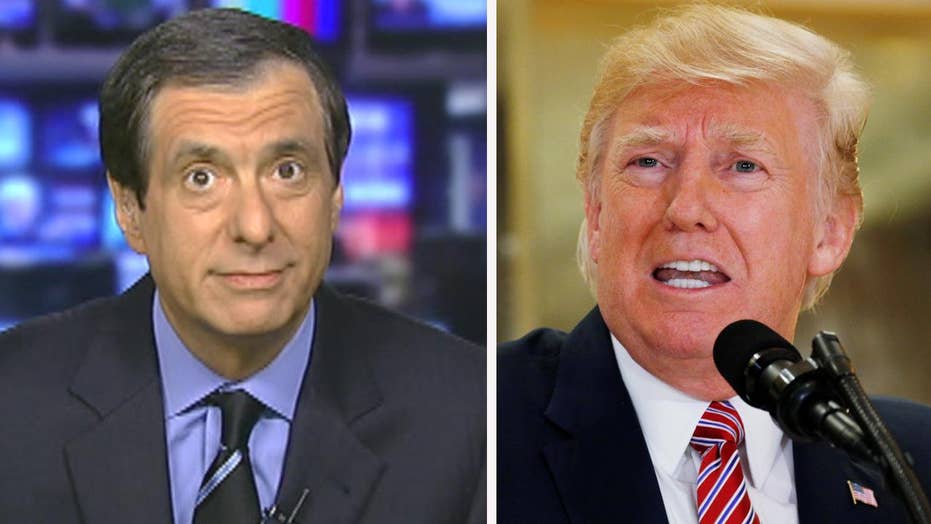 As the coverage of the Charlottesville fallout seemingly escalates by the hour, President Trump took a whack at the press Thursday. His tweet:

“The public is learning (even more so) how dishonest the Fake News is. They totally misrepresent what I say about hate, bigotry etc. Shame!”

Of course, by ripping the media on Charlottesville, the president is keeping alive a story that, by any measure, has been politically damaging for him. The same goes for his tweets calling it “foolish” to tear down “our beautiful statues and monuments” to Confederate leaders because “you can’t change history.”

Whether you agree or disagree with Trump’s handling of the deadly episode, he’s the one who elevated this into a political furor. His formulation of blame “on many sides” ignited the controversy Saturday; his explicit condemnation of white supremacists and neo-Nazis on Monday cooled the temperatures a bit; and his return to the both-sides-are-to-blame formulation Tuesday (and inclusion of “nice” people among the protesters) led to the current firestorm.

As I said on “Special Report,” the media shouldn’t pretend there’s some false equivalence between the KKK and Nazi types and the counter-protesters in Charlottesville, even if some in the latter group engaged in violence. But when you look at the coverage on some cable news networks, it’s hour after hour of moral outrage with very few dissenting voices. Even on this hypersensitive subject, there is a need in journalism for some degree of balance.

On that point, a new CBS poll shows that 67 percent of Republicans approve of Trump’s handling of Charlottesville, a finding completely at variance with the tone of the coverage. But with 82 percent of Democrats giving his response a thumbs down, the overall disapproval rate stands at 55 percent.

Meanwhile, there has been a torrent of leaks as some of those who work for Trump try to distance themselves from what they view as a mess.

The New York Times has this killer graf: “The president’s top advisers described themselves as stunned, despondent and numb. Several said they were unable to see how Mr. Trump’s presidency would recover, and others expressed doubts about his capacity to do the job.”

And then there is John Kelly, the retired general who was lauded for his presumed ability to bring order to an undisciplined White House. The Times says that the new chief of staff, “who watched the president’s performance on Tuesday with his head hung low, grimacing at some of Mr. Trump’s remarks, is frustrated, according to people inside the White House.”

The Times describes the dismay of Gary Cohn, director of the National Economic Council, who stood near Trump on Tuesday, and in the Washington Post, “those close to Cohn described him as ‘disgusted’ and ‘frantically unhappy,’ although he did not threaten to resign.

“But Trump felt vindicated after the remarks, said people familiar with his thinking. He believes that his base agrees with his assertion that both sides are guilty of violence and that the nation risks sliding into a cauldron of political correctness.”

And then there’s Steve Bannon, who made a splash by sounding off in a call to Robert Kuttner, the liberal co-editor of the American Prospect (whose first issue after the election was “Resisting Trump”). The president’s chief strategist made news on the showdown with North Korea, a trade war with China and his internal war against Cohn, but he said this about Charlottesville:

“Ethno-nationalism — it's losers. It's a fringe element. I think the media plays it up too much, and we gotta help crush it, you know, uh, help crush it more. … These guys are a collection of clowns.” He said the White House “can crush the Democrats” if they talk about racism and the administration focuses on economic nationalism.

Some associates said Bannon thought he was speaking off the record, a la Scaramucci, but Bannon told the Daily Mail that his comments “drew fire away from POTUS” and “changed the narrative.”

Bannon also told the Times: “President Trump, by asking, ‘Where does this all end?’ — Washington, Jefferson, Lincoln — connects with the American people about their history, culture and traditions.”

In this view, Trump is right where he wants to be, even if the media and political reaction has been overwhelmingly negative.