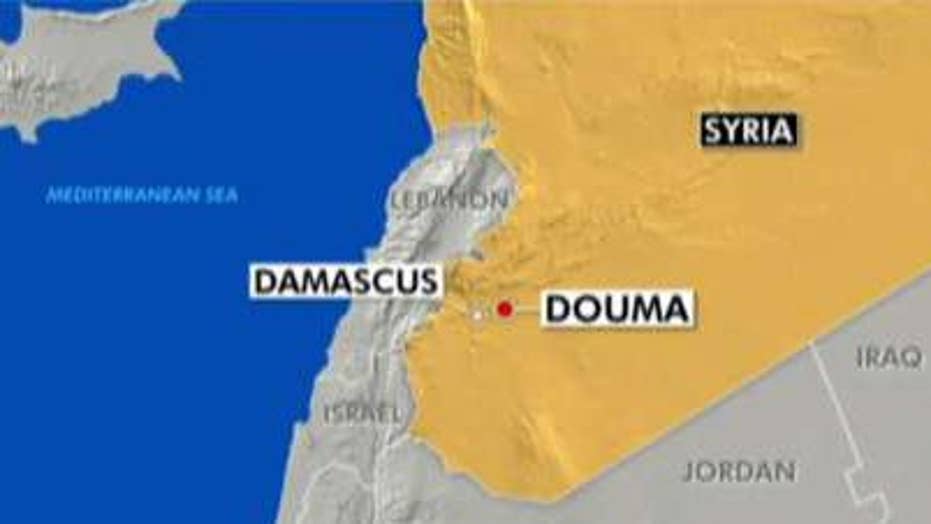 Multiple U.S. warships have been deployed to the Middle East; Jennifer Griffin shares latest details on the military action.

My name is Abdalaziz Alhamza and I am a 26-year-old Syrian refugee from Raqqa, the former capital of the so-called ISIS caliphate. I want to personally say thank you for joining with France and Britain to launch air strikes against Syria following chemical weapons attacks on Syrian citizens. You let Syria’s President Bashar Assad know that red lines drawn by the U.S. are no joke.

I pray you will continue to hit Assad hard and put smiles on the faces of all the mothers who lost their children. Your strikes give hope to all the children who lost their parents.

Mr. Trump, I urge you to push the international community to support civil society organizations, build schools and hospitals. People will appreciate this more than anything else, and you will go down in the annals of history as the greatest champion of humanitarian action in a world where international governing bodies are willfully impotent and paralyzed.

Looking back to my childhood in Syria, I can recall being made to watch the news with my father all the time. I was a kid, so I just couldn't get what was so interesting about people talking for hours on end!

I want to personally say thank you for joining with France and Britain to launch air strikes against Syria following chemical weapons attacks on Syrian citizens. You let Syria’s President Bashar Assad know that red lines drawn by the U.S. are no joke.

We would often watch news reports from Afghanistan, and I distinctly remember the fateful day of September 11, 2001 when I heard the name “Al Qaeda” for the first time. I was 9-years-old. I understood nothing. But then, the Iraq War happened. I quickly became versed in the lingo because virtually every Syrian television was tuned into footage of the war in Iraq.

When I got older, I opted out of getting involved in politics. The main reason I stayed away relates to our neighbor who was arrested under suspicious circumstances. People on the street would make cryptic comments like, “he'll never see the light of day.” It frightened me and I didn't question that feeling.

Later, like many of my Syrian compatriots, I joined the protests in our iteration of the Arab Spring early on, demanding freedom. I’ll never forget my first demonstration. Though I was among the throngs for maybe only 40 seconds, to me, it felt like an eternity.

Despite my conviction to the cause, I was still absolutely terrified of what could happen if I was identified by anyone affiliated with the government. So after those 40 seconds, I ran. I ran for 15 minutes straight, hopped in a taxi for a good distance, loitered at a small café for about a half hour, and then took another taxi home.

From that moment onward, I started to research what was going on in my country and the world. I started questioning everything I thought I knew. I started to probe the far reaches of my imagination: How could we effect real change in the country with these protests?

But before long, the Assad regime started arresting, torturing, and killing protesters. I was personally arrested three times, so these were no empty anecdotes; joining the protests posed a real threat to my life.

I nonetheless found myself addicted to demonstrating. I felt a sense of obligation to those protesters who had been disappeared or killed. It was during this time that we insisted on dismantling the Assad regime; the number of the protesters grew and demonstrations were popping up nearly everywhere in the country. A revolution was born in Syria.

Day after day, we faced off Assad's armed forces with our peaceful demonstrations to prove that all their violence would be unable to kill the spirit of the Syrian Revolution. We responded to gunshots with cameras and told all the world our story. A new generation of activists, journalists, artists, and civil society organizations began to thrive.

At first, we were convinced the regime would eventually abandon this bloody campaign – how long could it possibly go on killing its own people? But we were eventually forced to recognize a horrible reality: we were dealing with a regime that had controlled the country with an iron fist for more than 40 years. This regime's brutality knew no limits, no humanity, no mercy.

At the end of 2011, the Assad regime strategically released from its prisons the extremists who had returned to Syria following the Iraq War. The regime knew full well that these people were not interested in building schools or planting community gardens. These people were released into the country by the Assad regime to sow seeds of chaos and terror among the peaceful people demanding freedom from his tyrannical regime.

In the midst of our peaceful protests, we didn’t ask for foreign intervention; the Assad regime brought Iran and Hezbollah to fight for it. In time, we could no longer stand by and watch our people being massacred, so only then did we call for help from the international community. We pleaded that outside powers stop Assad by finding a political solution.

We asked that Assad be held accountable for his actions in a court of law, but all we got from the international community were speeches rich with hot air, and promises that were never be kept. And then ISIS emerged.

Mr. Trump, Syria’s people have been killed in so many ways – some you can imagine and others you cannot. Assad has killed us with bullets, bombs, snipers, starvation, and various forms of horrific torture techniques I could personally attest to.

I remember in 2013, when Assad deployed a chemical weapon that killed an unfathomable amount of Syrians in a matter of minutes. I cried more at that horror than any other – seeing all those dead bodies – free from any blood stains and perfectly intact apart from the yellow hue that shrouded their faces frozen in terror. All they had done to ensure their own deaths was to breathe.

Yes, Mr. President, they dared to breathe after your predecessor declared that any use of chemical weapons constituted crossing a red line. We took this to heart; we thought that this atrocity would finally elicit meaningful action from the U.S. and the international community to finally eradicate this 21st century monster.

Unfortunately, Mr. President Trump, the red line turned out to be drawn in blood, and we collectively lost all trust in the U.S. and international community. The world's inaction taught Assad that no one would stop him, so he continued to use chemical weapons with impunity.

In 2015, Assad brought the Russians in to fight alongside his armed forces and this decision, by far, turned the military table in his favor. The relatively weak Assad army was now empowered to slaughter even more Syrians.

This so-called civil war was no longer a family affair – we were being killed by non-Syrian actors – countries and militias that had nothing to do with us. The Syrian conflict turned into a proxy war. Then, and only then, the U.S.-led international coalition decided to join the war by targeting ISIS, and leaving Assad to act as he pleased.

My friends and I founded “Raqqa is Being Slaughtered Silently” – the first organization to report from inside ISIS territories. We wanted to fight terror with truth, and because of this, everyone affiliated with the organization became targeted by ISIS for extermination.

But while it’s true that I suffered more at the hands of ISIS than any other group, I need to tell you something very important: Assad’s regime is far more brutal than ISIS.

Mr. President, some 95 percent of the Syrians who have been killed in Syria were killed by Assad; his warplanes, his missiles, his chemical weapons. Not ISIS. ISIS was a nightmare for the Syrian people – this is beyond debate. But you, the world – you all decided to fight ISIS and forgot about Assad.

In 2014, I was forced to leave Raqqa and flee to Turkey after ISIS came to my house to arrest me. After that, I moved to Germany and began to travel the world trying to bring attention to my country and my cause.

I pray that you will continue working with France and Great Britain and the rest of the free world until Assad is finally defeated once and for all.

Abdalaziz Alhamza is an award-winning Syrian journalist, human rights defender activist and IT trainer. He is the founder and spokesperson of Raqqa is Being Slaughtered Silently (RBSS) which is a nonpartisan, independent organization that exposes the atrocities committed by the Syrian regime, ISIS & other groups in Syria. Alhamza started non-volatile protests and demonstrations against the Syrian regime in 2011 and was arrested by the regime three times in 2012.