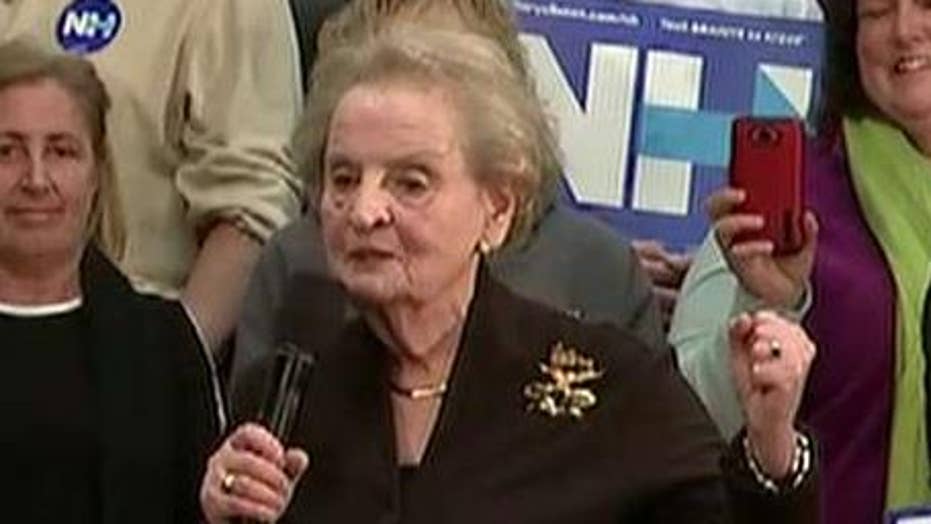 Feminist icons attack women who back Sanders over Clinton

Albright: 'Special place in hell for women that don't help each other'

Ah, the sad sound of feminist desperation—that’s what we heard this past weekend. With Bernie Sanders giving Hillary Clinton a run for her money, feminists have resorted to shame tactics to appeal to women voters.

On Friday, Gloria Steinem told Bill Maher that young women are only voting for Sanders because that’s where the boys are. It seems women don’t think clearly when they have boys on their mind—says a feminist.

And on Saturday, at a rally in New Hampshire for Mrs. Clinton, Madeleine Albright shouted, “There’s a special place in hell for women who don’t help each other!” To which Hillary cheered in response. Nothing like a little intimidation to rein people in.

I hate to be the bearer of bad news, but Clinton & Co. just dug their own grave. American women, apparently now even left-wing women, are not being the good feminists they’re supposed to be. Instead, they’re thinking for themselves. And they’re tired of being told they owe the ability to breathe to the women who came before them.

But Hillary understands women! She’s on your side! “We can tell our story of how we climbed the ladder,” implored Albright, referring to the fight for equality. “And a lot of you younger women think it’s done. It’s not done!”

Blah, blah, blah. Can we get some fresh blood here, please?

My sympathies certainly don’t lie with left-wing women, but I will say this: they’re smart to forge their own path. While they’re no doubt concerned with some of the same issues feminists are, they  clearly don’t mind if it’s a man who fights on their behalf.

Feminists do. Which should tell you everything you need to know about the feminist elite. Hillary & Co. have zero concern for the women of America. Zero. Their agenda is different. It’s to push the men out and get the women in. What they want, at the end of the day, is a matriarchy.

That is not what most women, Republican or Democrat, want. According to The New York Times, a Wall Street Journal/NBC/Marist College poll of Democratic voters in New Hampshire showed 64 percent of women under the age of 45 supported Bernie Sanders, while only 35 percent backed Mrs. Clinton.

What’s happening is dreadfully obvious—it’s just hard for feminists to swallow. Feminism, as they know it, is dead. Women have heard the siren call long enough, and they’re sick of listening to it.

That doesn’t mean women don’t believe in equal rights. It means they know such rights already exist. It also means they don’t identify with crazy statements like the ones Steinem made to Maher on Friday, when she said “the road used to be a male province” and that “home is still the most dangerous place for a woman.”

Telling young women who don’t vote for Hillary that they know not what they do—otherwise they wouldn’t be stupid enough to vote for Sanders—is hardly going to help you win them over.

It’s time for feminists to pack it up and go home. That ship has sailed. If they hurry, they might still be able to climb aboard.