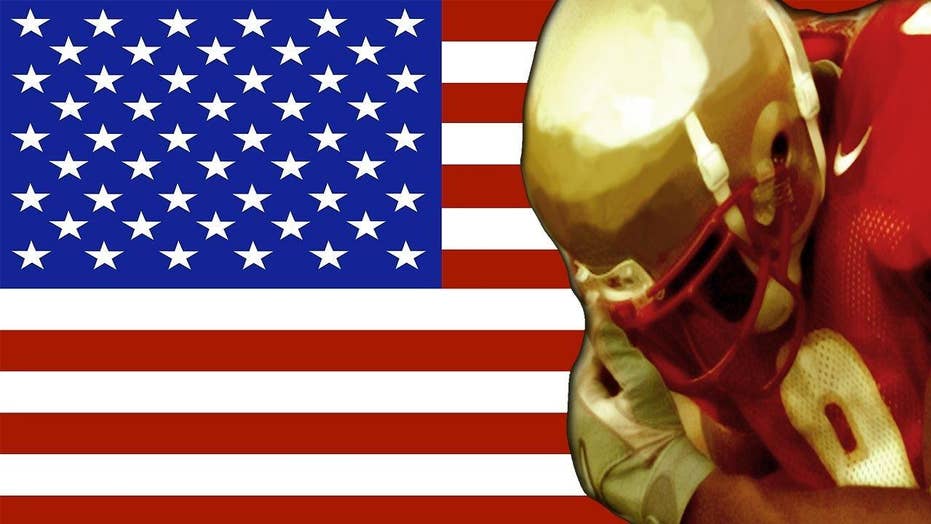 Students at Travelers Rest High School in South Carolina will once again be able to wave American flags at football games.

Principal Lou Lavely reversed his ban on Old Glory just a few hours after we posted a column about the controversial decision.

Uncle Chico restarted the football program at Travelers Rest in 1949 - and named the team the Devildogs in honor of the Marines.

"Today, after meeting with Travelers Rest student and faculty leadership, and with the benefit of time to reflect, Mr. Lavely has reached a different decision. He based this decision on current students’ request that he judge them on their own merits and not based on the actions of past students.  As a result, effective immediately, students are allowed to bring the American Flag to any and all Travelers Rest High School events.  Instead of restricting possession of the flag, the TRHS administration will, if needed, address the misuse of the Flag, or any other inappropriate behavior, on an individual basis.

“I fully support Mr. Lavely’s thoughtful reconsideration, and his willingness to respond to advice and input from his community,” said Superintendent Burke Royster. “I am appreciative of the Travelers Rest High School community for sharing its concerns and opinions on this matter in a respectful, civil manner.  I also appreciate and applaud their desire to promote patriotism and service as a part of the culture of their school and am in agreement that students’ desire to carry and display the American flag should be encouraged and supported throughout the District.”

Uncle Chico, who passed away in 2007, lived long enough to see the school name its new football stadium in his honor – a decorated war hero who loved America.

So you can understand why our family was disturbed to learn that students and fans were initially blocked from entering the stadium with American flags.

This item appeared in the Greenville News:

Beth Brotherton, a spokesperson for Greenville County Schools, confirmed to me that several students who wanted to bring American flags were blocked from entering the stadium.

“The principal, in an effort to prevent any potential issue in this rivalry game, decided not to allow students to bring in full-sized American flags,” she told me. “They were turned away at the gate with the flag and told they were welcome to come in but they could not bring their flags with them.”

So here’s the back story: during last year’s game, some students allegedly flew Old Glory and hollered out, “Go home, go home.”

“The principal made a decision in terms of what he thought was best for student safety,” Ms. Brotherton said. “Because of prior incidents, that was not something he felt like was in the best interest of maintaining a good relationship between the two school communities.”

Travelers Rest Police Chief Lance Crowe disagreed with the principal’s decision and fired off a statement letting the locals know that the police department loves America and Old Glory.

“To my knowledge, every TRPD officer, except one, believes that barring the American flag from a football game is not a correct policy,” Chief Crowe wrote.