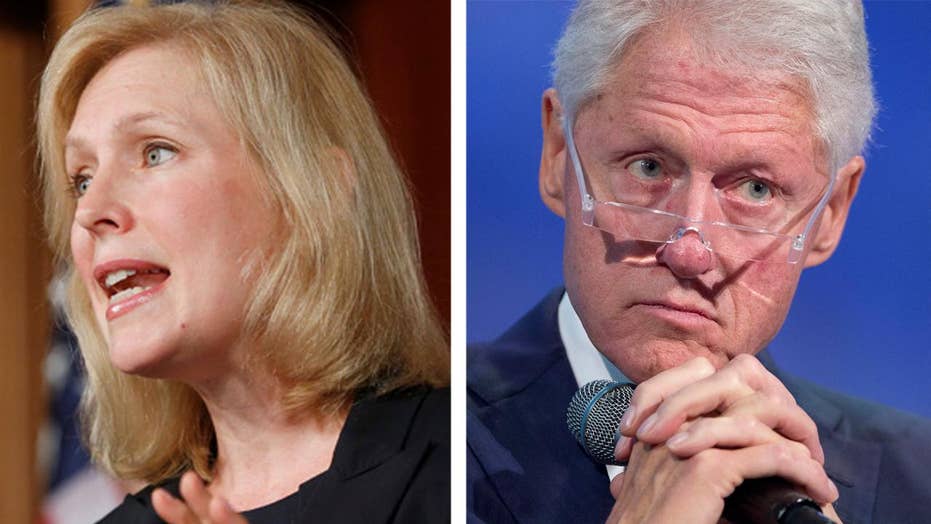 Gillibrand says Clinton should have resigned after Lewinsky

The New York Democratic senator is taking major fire for her comments about the former president; James Rosen has more for 'Special Report.'

The only question is what’s an “appropriate response” to Gillibrand. This fair-weather feminist is getting a little hard to take.

Gillibrand got her political start in 1999 working on Hillary Clinton’s senatorial campaign. Only one year after her husband had publicly humiliated her and the nation—one year after she decided it would be better to stand by her man than have to make it on her own as a single mother, albeit one with a Yale law degree—Gillibrand decided Hillary Clinton was her role model.

And little wonder. If you want to get to the top and don’t mind sacrificing a few principles, you can’t do much better than following in the Clintons’ footsteps. Indeed, they have served her well, offering money and endorsements for the last two decades, only for her to decide it’s now time to throw them under the bus.

But what’s particularly galling about Gillibrand’s message is the idea that no one knew any better in 1998, that our standards for behavior have evolved since then and that we must reevaluate in light of new circumstances.

Speak for yourself, lady.

For Gillibrand and her friends, what matters is not people but politics and her own ambition.

I was an intern the summer that no one wanted to be known as an “intern.” In fact, one of my fellow interns at the Wall Street Journal actually asked our boss if we could come up with a different term to be used in our bylines. It was also the summer I learned that feminists like Gillibrand had no principles.

I was living that summer in the spare bedroom of an elderly aunt—Julia was a 75-year-old widow who had worked her way up to be an executive at an advertising agency where she was still employed. She regularly spoke of how people underestimated her because she was a woman. She was paid less and offered fewer opportunities. Her family thought she was strange because she didn’t get married until late in life and had no children of her own, because she put her career first.

But her feminism was no match for her loyalty to the Democratic Party. I would come home many nights that summer to find her raging at the television news. But one moment stuck out in my mind. A picture of Monica Lewinsky flashed onto the screen. “You little bitch,” she screamed. “You ruined my president.”

If you wanted to know the prevailing attitude among feminists that summer—everyone from Gloria Steinem on down—it was this: “Blame the victim.” Monica Lewinsky was the problem. She was the one who threatened to take down the best thing in the Oval Office since JFK. The facts be damned.

It didn’t matter that she was barely out of college, that he was the president of the United States, that there was ample evidence he had taken advantage of other women, that he was married and had a daughter not that much younger than Lewinsky. Instead of saying “me too,” though, catty feminists were sharing their aesthetic opinions about the infamous blue dress. At a Halloween party that fall, I met more than one liberal woman dressed as Monica.

Gillibrand wants us to believe that no one realized—way back in the 1990s—how much of a problem this was. But this was not Mad Men, folks. The idea that young women were regularly being asked to perform oral sex on their bosses back then is far-fetched. Times were different but not that different.

Conservatives who said that Bill Clinton’s behavior crossed a line were mocked as prudes. We knew that there was something not just unseemly but pathological about him. But Kirsten Gillibrand did not care. She was happy to go work for the Clinton machine to advance her career.

For Gillibrand and her friends, what matters is not people but politics and her own ambition. Which is why she embraced the cause of Emma Sulkowicz, aka “Mattress Girl” who, all evidence suggests, made up a story of sexual assault at Columbia University and then made ruining a young man’s life into a cause celebre and a school project for credit. (Columbia settled a lawsuit by the man earlier this year.) Gillibrand invited Sulkowicz (who was trading flirty text messages with her alleged rapist in the hours before and after the supposed attack) to be her guest at President Obama’s State of the Union address in 2015 because it suited her ideological crusade.

Maybe next year she should invite Monica Lewinsky.

Naomi Schaefer Riley is an author of several books. Her latest is "Be the Parent, Please: Stop Banning Seesaws and Start Banning Snapchat: Strategies for Solving the Real Parenting Problems." (Templeton Press, January 8, 2018 )