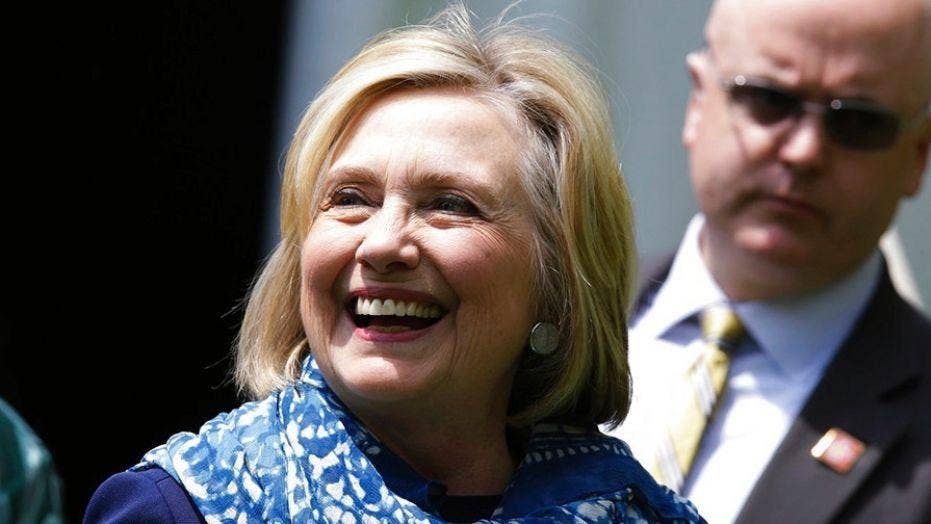 Harvard awarded its Radcliffe Medal to Hillary Clinton on Friday for her “transformative impact on society.” That’s not a misprint.

The prestigious Ivy League university is giving the woman who ran for president and lost, twice, an award for transforming society.

Harvard said it picked Clinton because of her advocacy for human rights, her work as a legislator, and her leadership around the world on behalf of America.

If “transformative impact” and Hillary Clinton in the same sentence has you shaking your head, you’re not alone. She not only lost the presidency twice, she has wasted the last year and a half going on tour around the world to blame America for not electing her in 2016.

It’s no wonder President Obama made her Secretary of State when he was elected in 2008 – after beating her in the primary that everyone expected her to walk away with. Clearly he knew the best way to keep her quiet was to keep her close.

Let’s be real, this is Harvard, arguably one of the most liberal universities in the country. Hillary isn’t being rewarded for transforming anything.

It’s not a good look for feminism, and all the more proof that America chose correctly in 2016. Hillary continues to look backward with anger and bitterness.

She’s being rewarded because they agree with her that it was her turn in 2016 and the country got it wrong - Donald Trump should not be president. Even though he’s the one who’s really having the transformative impact on society.

While she may not have transformed society the way Harvard is crediting her with, she has impacted and transformed the post-election cycle by turning it into a serial campaign instead of gracefully fading into the background like most dignified losers. If she were to brand a slogan for the show she’s taken on the road since losing the Oval Office to President Trump a year and a half ago, the side of her bus would read:  “The Blame Game - No Excuse Left Behind.”

Instead of cutting her losses and moving on, she’s traveling the world making sure everyone knows it’s not her fault she lost.  She has an excuse for everything and everything has an excuse.  Blame and belligerence are the name of her game.

Speaking to graduates at Yale this week, Hillary put on a Russian hat to make a joke out of the Russian involvement in the 2016 election. A year and a half after losing the election, Democrats are still trying, without a shred of evidence, to accuse President Trump of colluding with the Russians during the campaign.

Not only is there no sign of collusion with the Trump campaign and the Russians, but many signs point to an evident conspiracy among law enforcement and intelligence communities to ensure Hillary won the White House.  It’s nice that she can laugh and make jokes given that it looks as though unprecedented (and likely illegal) efforts were made by officials in the Obama administration to try to get her elected – and she still lost.

It was also at Yale that she admitted she’s still not over her loss to President Trump.  You don’t say.

In Australia recently to speak with Julia Gillard, the country’s first female prime minister, Hillary once again pulled out the sexism card, one of her favorites, to justify losing the presidency to Donald Trump. Hillary said, “There is still a very large proportion of the population that is uneasy with women in positions of leadership.”

This is an incessantly recurring theme. Earlier this year in India she said that sexism and racism were why she lost the election.

But interestingly, when given the choice between endorsing a man or a woman in the New York gubernatorial race, Hillary, the former Empire State Senator and feminist icon who believes people are uneasy with women in leadership, chose to endorse Governor Andrew Cuomo over Cynthia Nixon this week.

New York has never had a woman governor. Wouldn’t electing Nixon be truly transformative? That’s what women were told in 2016 when it came to voting for president.

And yet, there’s something eerily familiar about Hillary’s nixing of Nixon. Mrs. Clinton has always been the queen of the double standard, why should this instance be any different?

Harvard’s idea of what constitutes a transformative impact is likely very different than what most of the country considers that term to mean. Hillary has certainly impacted society, and the mark she’s made hasn’t reflected well on women.

When she couldn’t break the ultimate glass ceiling, rather than focus on what she could do, she proceeded to have a perpetual meltdown because of what she didn’t get to do. A meltdown that’s still going strong a year and a half later, and there’s no indication of it letting up anytime soon.

So, yes she’s been transformative and impactful. Just not in a way that helps move women forward, but instead sets us back decades.

It’s not a good look for feminism, and all the more proof that America chose correctly in 2016. Hillary continues to look backward with anger and bitterness. Meanwhile our country is moving forward with hope and optimism, thriving under the policies of President Trump.