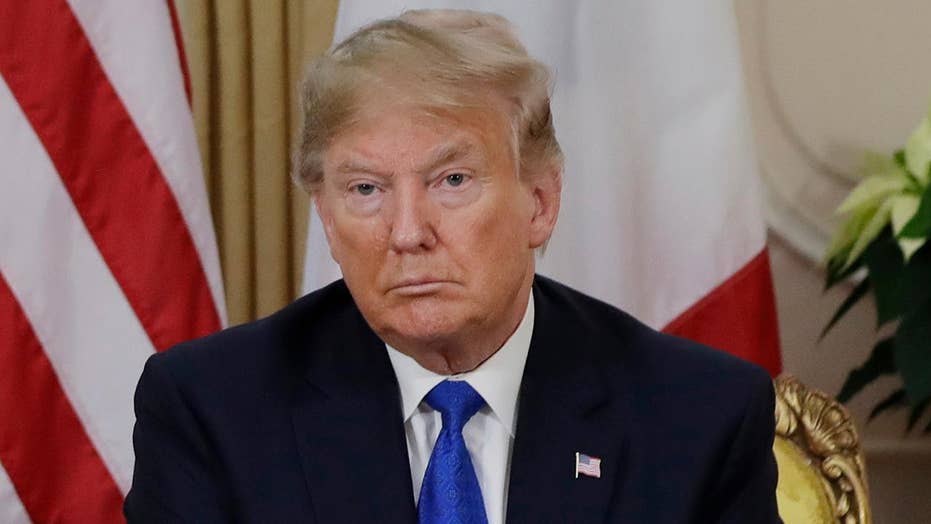 The NATO summit continued for its second and final day in London Wednesday, after President Trump renewed his necessary and reasonable call for all NATO members to recommit to spending at least 2 percent of their gross domestic product for defense.

Trump has been criticized by European nations for demanding that NATO members pay their fair share of defense spending, rather than simply relying on the U.S. to pick up a hugely disproportionate share of the costs.

The president should make clear to our NATO allies that they need to spend more on their defense to keep NATO relevant, or else NATO needs to die. Making that point so bluntly won’t please our allies, but you can bet it will get results.

JAMES CARAFANO: NATO, MACRON AND TRUMP – WHY THIS MEETING IS ALREADY DIFFERENT

Nations like Germany – which are among the richest on the planet and can surely defend themselves against Russia – need to meet such an obligation. If they can’t – or if they simply won’t – America has the right to reconsider its commitments to NATO, and whether NATO needs to exist.

Open any history book and one fact becomes clear rather quickly: no alliance between nations, let alone a grouping of nations, lasts forever.

Either the threat that brought the alliance together disappears, or the shared advantage of the alliance simply ends. That’s Geopolitics 101.

NATO was created 70 years ago to defend Western Europe against the powerful Soviet Union, which at the time exercised control over satellite nations in Eastern Europe and posed a real threat to nations further west.

But just because NATO was needed in decades past doesn’t mean it is needed now and will be needed far into the future. The Soviet Union no longer exists and has been replaced by a much weaker Russia and smaller independent nations on its border. In fact, parts of the Soviet empire are now NATO members, firmly aligned with the West.

Russia remains a threat to the U.S. and the collective European continent, and there is no denying that. Moscow has enough nuclear firepower to destroy the entire planet and end civilization.

Russia is modernizing its conventional armed forces and specializing in things like information warfare, cyber technology and electronic warfare to gain key asymmetric advantages over the West.

And Russia even cleaved off a piece of Ukraine back in 2014 – something it has paid a high price for due to economic sanctions.

But let’s not kid ourselves for one second. Russia is not now and never again will transform itself into the menace that was the Soviet Union.

Through decades of constant trials and tribulations, NATO stared down the mighty Soviets. Thanks to generations of Americans and Europeans and countless other allies around the world, democracy peacefully triumphed over communist tyranny.

So what does one of the most successful alliances of all time do when its primary enemy is defeated? What happens when no one wants to admit that either the structure and mission of the alliance need to change, or it needs to end?

Sadly, NATO came up with an answer that might haunt us for decades. It expanded eastward. In the late 1990s and to this day the argument was that NATO should incorporate the former satellites of the old Soviet Union to ensure that those nations are never subjected to rule by Moscow again and to guarantee that they permanently enter the orbit of the West.

Unfortunately, no one dared ask a simple question: How would Russia respond?

When NATO expansion was debated and eventually embarked upon in the 1990s, Russia’s own thoughts and geopolitical considerations were a mere afterthought for NATO members.

It seems we forgot one of the key lessons of past great conflicts, whether they were cold or hot wars: the only way to ensure a past enemy does not become a future enemy is to make it into a friend and ally, and no longer a rival.

Look at the results. West Germany, Italy and Japan – mortal foes of America and Western democracies during World War II – were not left out in the cold of the Western security architecture or economic order. They were made to share in the fruits of it.

These three formerly enemy nations were rebuilt, embraced democratic norms and values, and rejoined global geopolitics. They thrived economically and became models of prosperity and what nations can do after being vanquished in terrible wars that they started. Does anyone think America will fight a war against Japan, Germany or Italy again? No.

The Soviet Union and later Russia did not get such treatment. They were our major global adversary and competitor. NATO was designed to defend against the Soviets – not embrace them as allies. Like two opposing football teams, the idea of joining together as friends instead of competitors on the field was a radical shift that was never seriously considered.

In essence, NATO guaranteed its mission by helping to create a mission for itself – opposing Soviet and later Russian expansion – and leaders didn’t even have the common sense to realize what they had done.

But the pages of history can’t be rewritten now. With that said, NATO members have failed miserably to spend the necessary funds for military research and development, combat readiness and overall commitment to ensure that if military action is needed, they would be ready – unless American forces come across the Atlantic to the rescue.

In fact, study after study shows that NATO, in many combat scenarios, would lose in a military conflict against Russia. This is absurd. NATO nations should have all of the resources they need to take on a Russia if necessary. Russia’s economy, after all, is roughly only the size of Italy.

The good news is that Trump’s words have had an impact. Even before Trump landed in London, NATO Secretary General Jens Stoltenberg announced the latest spending figures of all NATO allies and, overall spending was up.

As of 2018, Stoltenberg said NATO nations – excluding the U.S. – were on pace to spend $100 billion more on their own defense by the end of this year. “In fact, this figure now stands at $130 billion,” Stoltenberg noted Friday.

Would any of this have happened if not for President Trump’s tough talk? Likely not.

Granted, Trump’s way of dealing may not always endear him to foreign leaders. But it delivers results that past presidents failed to achieve with their smiles, handshakes and adherence to diplomatic protocol.