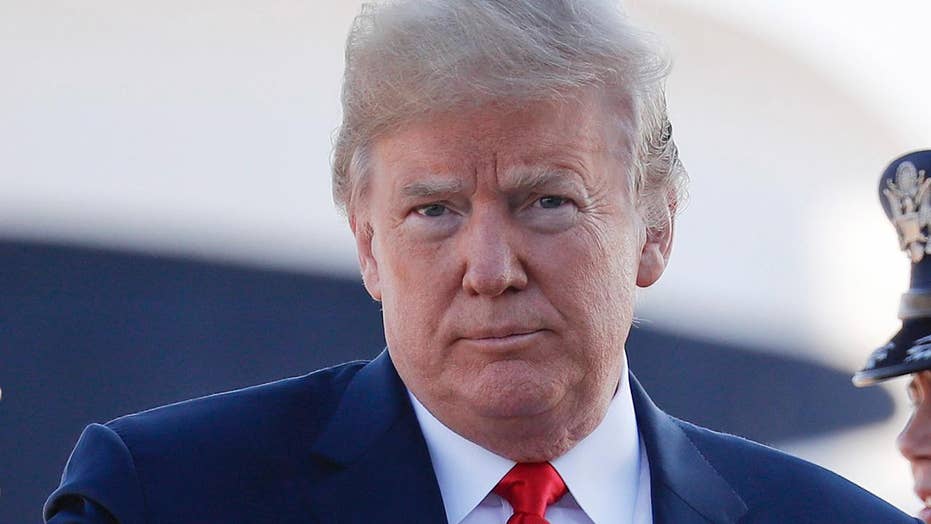 President ramps up criticism of unfair spending before departing U.S.; Kevin Corke reports from Brussels on how world leaders are responding.

President Trump continued his criticism of NATO Tuesday before he headed to Europe for a meeting of leaders of the 29-nation alliance Wednesday, trading barbed tweets with European Council President Donald Tusk. The testy exchange was further evidence that the president is right when he says that NATO – created in 1949 – has become obsolete.

The U.S. president understands one of the great cardinal rules of geopolitics that others seem to have forgotten: no alliance lasts forever. After almost 70 years, America and its NATO partners in Europe may be heading for a new relationship, while still remaining friends.

In an early morning tweet Tuesday, President Trump wrote: “Getting ready to leave for Europe. First meeting - NATO. The U.S. is spending many times more than any other country in order to protect them. Not fair to the U.S. taxpayer. On top of that we lose $151 Billion on Trade with the European Union. Charge us big Tariffs (& Barriers)!”

And in another tweet President Trump wrote: “NATO countries must pay MORE, the United States must pay LESS. Very Unfair!”

Tusk responded with a tweet of his own: “Dear @realDonaldTrump. US doesn’t have and won’t have a better ally than EU. We spend on defense much more than Russia and as much as China. I hope you have no doubt this is an investment in our security, which cannot be said with confidence about Russian & Chinese spending.”

History teaches us obvious reasons for the breakup of alliances. Circumstances and threats change. One country’s mortal enemy one day could be the nation’s best friend the next. Just look back at World War II – our enemies Germany, Japan and Italy are our allies today. Our ally Russia (part of the Soviet Union back then) is our adversary.

There is only one constant when it comes to smart foreign policy. A nation seeks allies and partnership where it has common interests. Sometimes those alliances lose their value or importance over time and break up.

China is the national security challenge of our time. Russia does not even come close.

To be clear, Moscow is certainly a dangerous adversary. Its occupation and annexation of Crimea – thanks to its growing military might – as well as brutal chemical weapons attacks on British soil prove a rogue Russia needs to be deterred and confronted if need be.

But today’s Russia is not the superpower threat that the Soviet Union was. Over the long-term, demographic issues, economic stagnation and questions of who succeeds Russian President Vladimir Putin clearly ensure Moscow is not the boogeyman it once was.

Russia’s economy is roughly the size of Italy. But thanks to a tremendous amount of natural resources (particularly oil and natural gas) that it can sell, along with a military inheritance from the Soviet Union – including a large nuclear arsenal – Russia clearly poses a real threat to Europe that can’t be wished away.

But as President Trump has pointed out, if Europe really wanted to defend itself – and all NATO nations spent 2 percent their gross domestic products on defense, as they are supposed to be doing in the next few years – Russia would be no match for the might of just Britain, France and Germany alone.

Add in the capabilities of all the other members of the alliance – with America playing a small role as well – and Putin would, at least in theory, have every incentive to play nice for as long as he stays in power.

Instead, we have a situation where many of Europe’s major powers have armed forces that can barely do anything anymore. Having focused on developing expensive social welfare programs that cost billions of dollars every year, Europe has instead outsourced its defense to the U.S. military and U.S. taxpayers.

This forces America to put vital resources into Europe that are sorely needed elsewhere – especially in Asia. Even having a military with a $700 billion annual budget that is the best in the world does not mean America can defend all our allies all over the world. They have a responsibility to pay their fair share for their own defense and fill the ranks of their own armed forces, as President Trump has repeatedly pointed out.

America’s power and might must be focused on the greatest of all threats, with our partners and friends taking on the burden in other areas of the world that are closer to their doorstep.

With Chinese economic and military power on the rise, the U.S. must concentrate its efforts on the rising Asian superpower that seeks to overthrow the international order in the Asia-Pacific and turn large sections of the sea into its own sovereign territory. China is the national security challenge of our time. Russia does not even come close.

And then there is North Korea. As the world witnessed last weekend, Pyongyang will not be handing over its nuclear bombs anytime soon. Washington must focus as much of its diplomatic attention – and if need be, military might – on ensuring that we find a long-term solution to deal with North Korea. If we fail to do this, we are doomed to increased tensions like those that nearly brought East Asia to the brink of nuclear war last summer.

All this means that America’s available diplomatic and military bandwidth that it can devote to Europe must change. We must face up to the fact that NATO, in its present form, is obsolete. The alliance must evolve into an organization led and mostly resourced by Europeans.

So, is America going to quit NATO and go back across the Atlantic or abandon its allies in Europe? Never. Does that mean a wave of isolationism has infected Washington and we won’t honor our treaty commitments or push back against Moscow in another crisis? Not at all.

But it does mean a fundamental shift in burden that a Europe blessed with wealth and riches can easily maintain. However, if Europe is unwilling or unable to field a credible armed force to take on challenges from Russia or elsewhere, we must question the utility of an alliance that is a shell of what it used to be.

This is the message I expect President Trump will deliver in Europe. And it’s one our partners on the continent need to listen to.