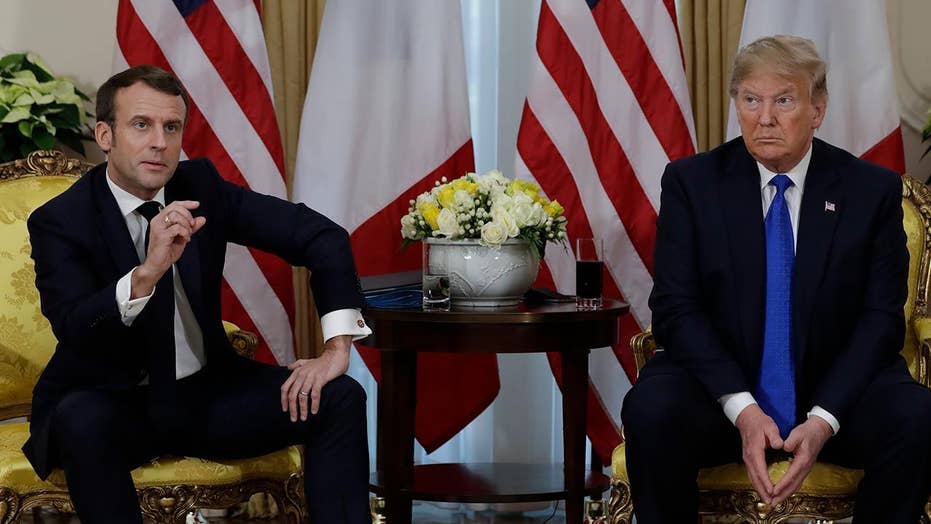 President Trump and France’s Macron clash on NATO and ISIS

The leaders of NATO nations wing into London this week. There’s no big to-do list for the meeting, but it’s symbolically quite important.

Alliance leaders are gathering to mark the 70th anniversary of the world’s most successful instrument of collective security. Still, it might not be all happiness and light. Someone may decide to spoil the party, and, no that someone is not likely to be Trump.

Going into the festivities, the smart money said that if anyone would make a scene in London it would be either French President Emmanuel Macron or Turkish President Recep Erdogan. So far the smart money has been right about Macron. We'll see about Erdogan.

Erdogan is angry about the criticism over the Turkish incursion in Syria. He also resents U.S. pressure to reverse his decision to purchase and deploys the Russian S400 air defense system.

Macron, for his part, seems to be channeling his inner Charles DeGaulle. In 1966, the French president shocked the West by withdrawing from the NATO military command structure. DeGaulle felt France could freelance its way to “balance” between the U.S. and Russia as an independent force. (France rejoined in 2010 under Sarkozy.)

Recently, Macron made headlines by calling NATO “brain dead” and urging yet another “reset” with the Russians. He scolded NATO for being insufficiently stern with Turkey and insufficiently focused on ISIS. Macron also continues to cheerlead for a more independent and autonomous European Security framework. And, he wants all that on the table in London.

In practical terms, neither Macron nor Erdogan has anything to offer. Macron’s Russian engagement is dead on arrival. Better relations with Russia would require a different Putin—and that ain’t gonna happen.

Turkey is safer inside NATO than out. Erdogan has no plan to ax relations with the U.S. over a thorny issue like the S400, Syria or Libya. He can pout, but that’s about as far as he can go.

While Erdogan and Macron are pulling in opposite directions. Britain remains distracted by Brexit. Meanwhile, Germany’s Markel has been scolding Macron. This all makes Trump look like the pillar of strategic leadership.

The U.S. should use that leadership posture wisely in London. Macron and Erdogan lack any truly pressing issues they can use to hold the meeting hostage—and the U.S. shouldn’t offer them the space to make mischief.

Trump has started a constructive conversation on burden-sharing, and the U.S. should keep it constructive. One way is to focus on concrete commitments like the 30/30/30 initiative, which calls for the alliance to have, collectively, 30 battalions, 30 ships and 30 air wings ready to defend NATO member nations in 30 days.

The U.S. should also work with Germany on a common plan for burden-sharing. Germany estimates it won’t hit the goal of spending 2 percent of its GDP on defense until something like 2035—11 years after the agreed upon target date. The Germans argue that a faster build-up would exceed the practical limits of what their military can absorb. It’s not a nonsense argument, but together the U.S. and Germany have to the figure out how to square the circle; how to make the case that they agree to both support full speed ahead for modernizing and rebuilding NATO forces without appearing to just be giving lip-service to the two percent pledge.

There have been reports suggesting that the U.S. plans to lower its share of NATO’s operating budget, that’s not likely to be an issue at all. First of all, it appears the formula has already been agreed upon. Second, there is no reduction in the NATO operating budget. Third, the NATO budget is mostly about administration; it’s the nation’s defense budgets that fund the troops, ships and planes. Fourth, the Defense Department has stated it would reinvest any savings in other European defense initiatives. So on balance, the impact of the decision is marginal.

Critics have tried to jump on the news as somehow reflecting that the White House is disengaging from NATO. That’s ridiculous. It is not even clear the White House played a major role in the decision. As a news story, it’s a nothing burger without a bun. The issue certainly won’t make waves in London.

It would be unreasonable to think all of the disagreements in NATO can be worked out over coffee at a state dinner. On the other hand, Trump and other NATO leaders can reaffirm the progress they have made in making the alliance better; keeping the door to NATO enlargement open; and resolving to continue their seven-decade commitment to collective defense.