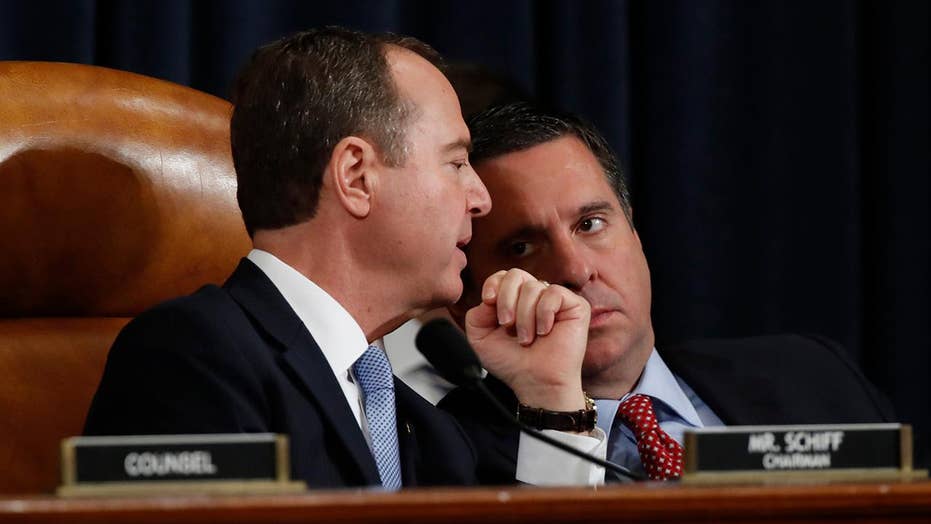 Democrats and Republicans battle over 'hearsay' during impeachment hearings

House Intelligence Committee Chairman Adam Schiff, D-Calif., hasn’t yet produced most of his witnesses in the public impeachment hearings regarding President Trump. But if the State Department’s George Kent and Acting Ambassador to Ukraine William Taylor are representative of the testimony Democrats are relying on, future historians may label this episode The Big Impeachment Blowout.

The House impeachment inquiry is not a criminal proceeding. But as I listened to the hearsay and speculation that Kent and Taylor were offering Wednesday at the opening public hearing on impeachment, I couldn’t help thinking of REO Speedwagon’s song “Take it on the Run.”

Both Kent and Taylor admitted they never talked to President Trump and only heard third-hand what supposedly occurred in the president’s July 25 telephone call with Ukrainian President Volodymyr Zelensky.

Democrats seem to have dropped the quid pro quo claim, since there was no evidence of it in the rough transcript the White House released of the call. The claim does not seem to be playing with the American public.

Taylor admitted in the hearing that Zelensky had no idea that U.S. aid was being delayed, and Zelensky himself has said there was no quid pro quo.

Democrats have now switched to using the terms “bribery” and “extortion,” no doubt because those terms sound more sinister, despite the fact that they’ve produced no evidence – so far – that would come even close to showing a violation of the federal laws defining bribery and extortion.

Both witnesses expressed their opinions disagreeing with the way President Trump has conducted diplomatic relations with Ukraine and the handling of U.S. aid to the country.

But the president is not a postman for Congress or the State Department. His job is to faithfully execute the law. As the chief diplomat of the United States, he defines our foreign policy, not George Kent or William Taylor.

Our country doesn’t give money or aid to other countries for no reason. We give it with specific conditions attached.

The president has a duty to make sure that our money is going to countries that will use it as we intend and not divert it into profiteering and personal corruption. State Department bureaucrats have never been good at ensuring that countries prevent such corruption.

The priority of our diplomats is to maintain their access to government officials in the countries in which they are stationed. This too often overrides their duty to guard against corruption. The president has the final responsibility for ensuring U.S. aid is not improperly diverted in other nations.

It was widely known that Ukraine had, and still has, a corruption problem. It would have been irresponsible for Trump not to look into corruption and demand changes before our money went there.

Even Kent admitted in his testimony that Burisma, the Ukrainian company that employed Vice President Joe Biden’s son Hunter as a highly paid board member, was part of the “pervasive and longstanding corruption in Ukraine.”

Of course, we will not hear any facts about that because Chairman Schiff has refused to allow the Republicans to call Hunter Biden as a witness, which would enable the younger Biden’s possible self-dealing in Ukraine to be investigated.

If everything Hunter Biden and his father Joe did was ethical and above board when it came to Ukraine, why wouldn’t Democrats want Hunter Biden to testify?

And why has Schiff’s committee blocked the Republicans from being able to call the so-called whistleblower who started this whole show-trial that Democrats call an impeachment inquiry? What are they afraid will come out about this government employee that might damage his credibility and the claims he is making?

Apparently, Schiff doesn’t want any testimony that would support the legitimacy of the president’s corruption concerns about Ukraine or would somehow detract from the impeachment narrative Democrats are trying to weave into the minds of the American public.

We certainly won’t have an objective, bipartisan inquiry into all of the relevant aspects of what happened here – and why it happened. Schiff even interrupted Republican questioning to tell witnesses they should not answer questions based on “facts not in evidence,” a bizarre statement given the nature of a congressional hearing and how it is normally conducted.

Adam Schiff used to be an assistant U.S. attorney – a federal prosecutor. Like all people in that position, he had to follow the U.S. Attorneys’ Justice Manual.

Before taking a case to a grand jury, much less to trial, Schiff had to convince his boss, in writing, that he had evidence establishing a case. He couldn’t just wing it and submit a case, however weak, based entirely on hearsay, to the grand jury on the off-chance it would indict.

Yet that is exactly what Schiff is doing here – throwing witnesses into closed and now open hearings hoping that he can stir the political pot into an impeachment boil.

It would undermine our system of government for a duly elected president to be removed through impeachment for partisan reasons.

Impeachment should only be used when there has been serious, substantial misconduct of such a nature that we can’t wait for the next election. As far as is publicly known at this time, that standard has not been met regarding President Trump.