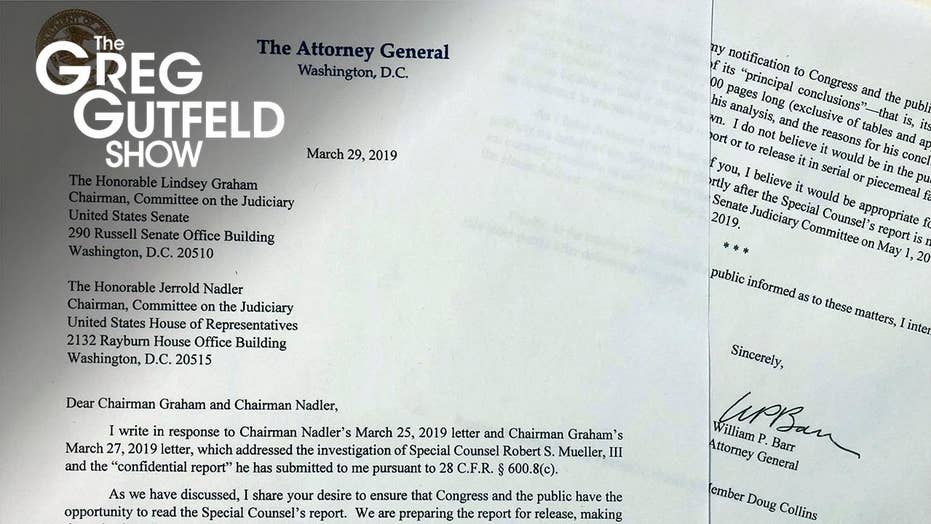 All right, so about this collusion thing.

Collusion delusion. That sounds like a bad David Blaine show. Anyway, it's big news, worthy of a big rally especially since most of the media were betting on the opposite.

No one has been this wrong since God made tonsils.

GUTFELD ON THE MEDIA IN DENIAL OVER COLLUSION

JILL WINE-BANK, CONTRIBUTOR, MSNBC: "I looked up the definition of treason as soon as people started saying this was treason and indeed it is."

JOY BEHAR, HOST, ABC: "Michael Flynn promised full cooperation to the Mueller team and is prepared to testify that as a candidate, Donald Trump directed him to make contact with the Russians. Yes."

That did not age well, but at least some of them kept their sanity.

Poor Rachel is turning into your crazy aunt right before your eyes. Ten bucks says she's going to show up to work next week with Kleenex boxes for shoes.

So, now the people who were dead wrong are now warning Trump against taking a victory lap. Like they have the license to give advice. The freaks who've been telling everyone that he's a spy are saying don't be happy that he is not. Please, forgive us if we aren't relieved that our country is in safe hands, you jackasses.

But imagine -- imagine if the outcome will reverse and Mueller concluded there was collusion. CNN, MSNBC, the Washington Post -- they'd all be celebrating.

Sadly for them, it didn't turn out that way. Instead, no collusion.

But I don't feel bad for the media, neither should you because they never learn. This is what happens when you invest too much in something you want to be true and now it's not to be.

They're crushed. No, they are worse than crushed. Isn't it amazing how the loudest collusioners have gone silent? Where could they be?

And think about what the media could have covered instead of this circus. Imagine the things they missed being so focused on collusion. Probably a lot of stuff.

So few people have ever had a better week like Trump's. First, you're vindicated after a two-year witch hunt, then Michael Avenatti gets arrested for like everything, but if you think he's having a bad day, imagine being one of his clients.

It's good to be Trump today. At CNN, their anchors have so much egg on their faces Brian Stelter keeps chasing them around with a fork.

So what's next? At CNN, they reported on a poll in which the majority said that Donald Trump is ill-tempered. Yes, imagine that, to go from calling the President a Russian spy to you know he's just a big meanie. That's like going from Genghis Khan to Chaka Khan.

Off they go to find another lame story to scream about and you will go on with your life happy in the thought that you were correct and you were saying -- and yet, you had a friend like me to steer you right.