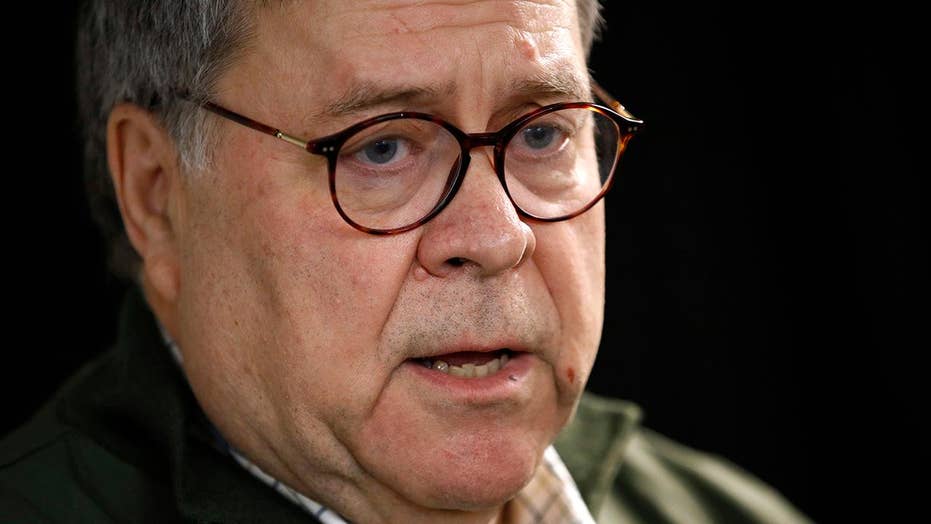 It turns out that the most revealing aspect of the long-awaited Justice Department’s inspector general’s report on the origins of the Russia collusion hoax comes from Attorney General William Barr’s damning assessment of it.

In unmistakably terse language, Barr denounced “a small group of now-former FBI officials” for their “misconduct,” “malfeasance and misfeasance,” and “clear abuse of the FISA process.”

Inspector General (IG) Michael Horowitz, issued a 476-page report Monday that broadly examined: (1) how and why the FBI initiated an investigation of candidate Donald Trump and his campaign in July 2016; and (2) the decision to seek a Foreign Intelligence Surveillance Act (FISA) warrant to surveil a Trump campaign associate.

SEAN HANNITY ON IG REPORT: 'WE WERE RIGHT EVERY STEP OF THE WAY'

As to the first action, Barr concluded that the IG report “makes clear that the FBI launched an intrusive investigation of a U.S. presidential campaign on the thinnest of suspicions that, in my view, were insufficient to justify the steps taken.”

In plain terms, Barr is convinced that the FBI was wrong to investigate Trump and his campaign, because the evidence was conspicuously deficient. Barr noted that the FBI “pushed forward” with its investigation even in the face of “consistently exculpatory” evidence.

As to the second action, Barr condemned those same FBI officials who “misled the FISA court, omitted critical exculpatory facts from their filings, and suppressed or ignored information negating the reliability of their principal source.”

The FBI relied on Christopher Steele as its major source for information presented to the FISA Court. The ex-British spy had assembled his unverified “dossier” of hearsay information from supposed sources that were largely anonymous.

The FBI knew Steele was unreliable, yet the bureau vouched for him as credible. Evidence was concealed and the FISA Court was deceived.

Barr announced that current FBI Director Christopher Wray will implement a “comprehensive set of proposed reforms” to ensure that such egregious abuse never happens again. Wray agreed, telling ABC News that FBI officials “failed to follow our policies, neglected to exercise appropriate diligence, or fell short of the standard of conduct and performance that we expect of all our employees.”

The attorney general’s skeptical view of the IG report was shared by John Durham, the U.S. attorney in Connecticut specially appointed by Barr to investigate the origins of the FBI’s Trump-Russia probe.

Durham revealed that “last month we advised the Inspector General that we do not agree with some of the report’s conclusions as to predication and how the FBI case was opened.”

Durham pointed out that the IG’s investigation was limited to the Justice Department. In contrast, Durham has greater investigative authority and has developed “information from other persons and entities, both in the U.S. and outside the U.S.” Horowitz readily acknowledged this on the very first page of his report.

Barr’s harsh criticism of the FBI stands in stark contrast to the findings offered by the inspector general.

Although Horowitz identified at least 17 significant errors of omission in the FBI’s application to surveil former Trump campaign adviser Carter Page, Horowitz opined that the warrant application was “properly predicated.” That is impossible, given the sheer volume of mistakes –and Barr surely knows it.

Horowitz also stated: “We did not find documentary or testimonial evidence that political bias or improper motivation influenced the FBI’s decision.” Of course he didn’t. No one is foolish enough to confess to biased decision-making or reduce it to writing.

What’s baffling is how the IG seems to have blindly accepted the stories peddled by former FBI officials like Director James Comey, Deputy Director Andrew McCabe and General Counsel James Baker – not to mention Steele himself. Horowitz wrote that it was not his role “to second-guess discretionary judgments.” Then why did he examine them?

Nonetheless, there are some stunning revelations in the report that should trouble all Americans about how easy it is for the FBI to open an investigation of anyone and convince a FISA judge to permit court-sanctioned surveillance.

Lies and deception were the key. The FBI relied almost exclusively on Steele’s uncorroborated “dossier,” despite Comey’s public statements to the contrary. The IG found numerous instances in which the court was given “inaccurate, incomplete, or unsupported” information.

For example, the FISA Court was never told that the Hillary Clinton Campaign and the Democratic National Committee paid for Steele to put together his “dossier” – a major omission that clearly should erode the credibility of Steele’s report.

The court was also never told that Steele had lied in the past and had serious problems with his credibility and “poor judgment;” that Steele’s primary sub-source was a “boaster” known to embellish and who later cast doubt on the “dossier”; nor that Steele had a known bias against Trump and was “desperate that he not get elected.”

The sub-source was interviewed by the FBI three times in 2017, advising agents that Steele had misstated or exaggerated his information, which came from “word of mouth and hearsay” over beers. Some of the statements had been made in jest and were just “rumors and speculation,” the unidentified sub-source said.

None of this was disclosed to the FISA Court. Instead, the FBI assured the court that the sub-source was truthful, suggesting that his information was all corroborated – when the FBI knew it was not.

In addition, the court was never told that a top FBI lawyer doctored evidence to create a false and negative impression of Carter Page that was then used for one of the FISA warrants.

The FISA Court was also never told that a Yahoo News article cited as an independent source also came from Steele. Nor was the court told that evidence was uncorroborated and the sub-source information was unverified.

Further, the FISA Court was never made aware of exculpatory evidence that Page had previously helped the U.S. government; nor was the court told of multiple exculpatory statements by Page gathered by an undercover informant.

These are some – but not all – of the 17 material deceptions identified in the IG report that were made by the FBI to a succession of FISA judges over the course of four warrant applications to spy on Page. The facts were manipulated to mislead the court. Even after Steele was fired by the FBI for leaking and lying about it, the bureau continued to rely on him as its source.

These are not mere “performance failures,” as the IG describes them. Collectively, they constitute a deliberate and successful effort to violate Page’s civil liberties and constitutional rights. The misuse of power was knowing and purposeful.

The FBI brazenly told the FISA Court that Page was a spy. The bureau knew he was not. This was rampant, unconscionable abuse of the rule of law. Despite Horowitz’s claims, the FBI invented probable cause where none existed. The true target was Donald Trump.

Horowitz also accepted without question the FBI’s explanation that the opening of its investigation of Trump on July 31, 2016, was justified because campaign adviser George Papadopoulos heard a rumor that Russians were in possession of Hillary Clinton’s emails and might use them during the campaign. Yet, it is not a crime to hear a rumor or even pass it along.

Under FBI regulations, a formal investigation can only be initiated if there is a reasonable basis to believe that a crime has been (or will be) committed.

Additionally, there must be specific “articulable facts” in support of that crime. Here, neither were present. This leaves a largely phony “dossier” as the only remaining evidence. Absent verification that the FBI never secured, it was no evidence at all.

This is likely the reason that both Durham and Barr have refused to accept the IG’s conclusion that the original investigation of candidate Trump and his campaign was justified. With greater investigative authority than Horowitz and the power to compel witnesses through grand jury subpoenas, they may already have developed actionable evidence of lawlessness and corruption.

There was never any credible evidence that Donald Trump was a Russian asset or that his campaign had engaged in a criminal “collusion” conspiracy with the Kremlin to steal the 2016 presidential election. This claim was a pernicious lie and the dirtiest political trick ever perpetrated.

It was, as Trump called it, a hoax and a witch hunt. Yet, for more than two years Americans were told by Rep. Adam Schiff, D-Calif., countless other Democrats and the mainstream media mob that it was all true. Until the report by Special Counsel Robert Mueller said it was not.

Senate Judiciary Committee Chairman Lindsey Graham, R-S.C., will question Horowitz at a public hearing Wednesday. After reading the IG report, Graham called the FBI’s actions a “criminal enterprise” that ran off the rails.

Graham is now armed with 476 pages of proof.