Every morning as commander of the 2nd Brigade, 101st Airborne Division, I would walk into the headquarters building and past the pictures of previous commanders, the most prominent being that of then-Col. Colin Powell.

By that time in 2001, Powell was the secretary of state, and his example was a powerful reminder to me and all the Strike Brigade soldiers of the standards he set as a leader and statesman. Powell transcended politics as he remained firmly anchored in service to the nation.

The rightful plaudits and memories of Gen. Powell are pouring in, earned by a life not only well lived but one that demonstrated a tenacious ability to break through barriers and set the example for all military men and women.

THE WISDOM OF COLIN POWELL

Reflecting on the commanders' wall and on Powell’s oft-quoted list of 13 rules to live by, the nation could take a cue from his example and parlay that into a clarion call for unity.

Instead of leveraging the story to drive home information about the effectiveness of the COVID vaccine, or relitigate the Iraq war decision, or pursue an angle that he disagreed with any former president – all of which are being fired off in our country’s information civil war – we could step back from the abyss of the duel in which our nation finds itself.

We could use the example of how he lived his life as self-imposed guardrails for how we comport ourselves in daily discourse. We could rise above the political fray and realize that we are a nation shattered by decades of infighting that requires healing and teamwork unless we want to lose it all. We are every bit divided today as we were during the American Civil War, with destroying the "other side" the governing maxim.

Powell’s conviction was that America is a great country where opportunity awaits those that work hard and apply themselves. His rules to live by are governed by humility, dedication, patience, and forgiveness, traits our society lacks today. 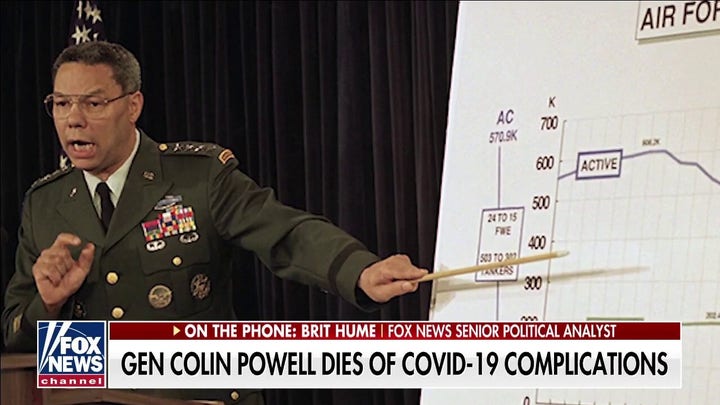 While there has always been yellow journalism and political infighting in our country, our institutions prior to social media had funneled the debate into mostly acceptable discourse. Today, though, with weaponized agencies, political purges, and the media transitioning from an oversight role to one of outright advocacy to secure and share power, our institutions have been frayed and weakened over the past two decades.

Powell's rules to live by are governed by humility, dedication, patience, and forgiveness, traits our society lacks today.

The best legacy and use of Colin Powell’s example would be to use his passing not to further divide us, but to unite the nation behind a common goal of unity of national purpose and pride in the country. We need to study Powell’s 13 rules, and instead of the rampant cynicism that governs discourse today, derive hope from his message and deliver action.

Powell was a steady leader in challenging times for six decades of his life. We are headed to the point of no return and over the waterfall with attacks, hatred, and political persecution. The social media-fueled rapids are flowing hard, pulling us over the cliff. Will we shatter on the rocks or survive the fall?

Powell teaches us that we can "get mad, then get over it;" that, "it can be done;" to "remain calm, be kind;" and that "perpetual optimism is a force multiplier."

We all make mistakes but as Powell reminds us, "It’s not as bad as we think. It will look better in the morning."

Do we as a nation and people want to be defined by our worst moments or our best moments? Powell’s optimism and humility auger for recalibrating the cynical judgment we use to tear down others and repurpose that energy to help build a better future for our children and nation.

We remember Powell’s life for his unparalleled dedication to public service. What better use of this man’s great example than to unify in common purpose consistent with how he lived his amazing life.

Retired U.S. Army Brigadier Gen. Anthony J. Tata is the bestselling author of 14 novels including his latest, "Chasing the Lion," and performed the duties of Undersecretary of Defense for Policy.