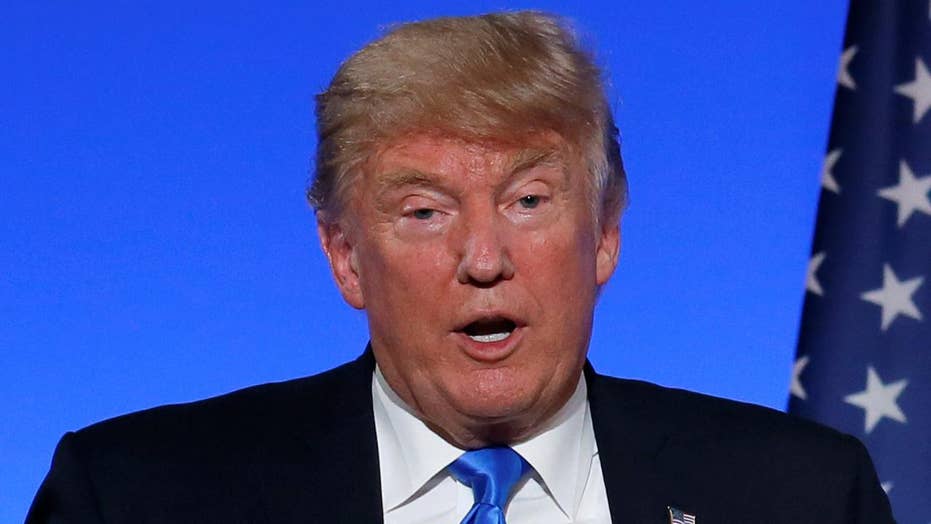 Trump: The friendship between our two nations is unbreakable

France shares a dubious distinction with my own home country of Italy. Both were among the first to send business delegations and enter into new trade agreements with the Islamic Republic of Iran following the implementation of the Iran nuclear deal, or Joint Comprehensive Plan of Action (JCPOA) – what President Donald Trump is famous for describing as “the worst deal ever negotiated.”

In a joint press conference with his French counterpart, President Emmanuel Macron, in Paris on Thursday, President Trump said, “Today we face new threats from rogue regimes like North Korea, Iran and Syria, and the governments that finance and support them.”

It is yet unclear what exactly the two presidents may have discussed when it comes to Iran, but one can hope they will present a united front standing against the regime going forward.

High on the list of measures to halt Iran's destructive behavior is an idea already floated by President Trump in his first weeks in office - designating the Iranian Revolutionary Guard Corps as a foreign terrorist organization and cutting off its access to American dollars.

Macron, like Trump, took over for a predecessor who played a role in the nuclear negotiations and the associated, conciliatory policies toward the Islamic Republic.

The question is whether France will continue to look the other way on Iranian misbehavior while pushing French business toward the unstable Iranian market? Or will President Macron reintroduce the extensive demands and high level of scrutiny that had guided French negotiations before the JCPOA was implemented?

The French government has a particular responsibility to address the issues of Iranian misbehavior that have been shunted to the side.

The French energy company Total SA announced this month that it would be helping Iran to develop a prominent off-shore gas field. This announcement was eagerly embraced by the mullahs in Tehran, who suggested that it would lead the way to more Western investments in the Islamic Republic, even if Iran continues to push the boundaries of the JCPOA while taking no steps to diminish the threat of terrorist-linked money laundering. In fact, Tehran seems committed to taking full advantage of the new conditions created by the nuclear deal, but without changing a single thing about its malign influence on the region or the world.

France, of course, had a prominent hand in creating those new conditions, as one of the six parties that helped negotiate the JCPOA opposite Iran. To its credit, the French negotiating team developed a solid reputation for putting the highest demands upon the Islamic Republic. Nevertheless, the world ended up with a rather tepid deal, which offered Iran tens of billions of dollars’ worth of sanctions relief in exchange for fairly modest and completely reversible restrictions on the Iranian nuclear program. Meanwhile, peripheral issues remained entirely ignored, such as Iran’s ballistic missile development and contact with terrorist organizations and rogue states.

Interestingly, President Macron’s meeting with President Trump takes place almost exactly two years after the nuclear negotiations were concluded. And if Iran was a major topic of discussion, this meeting has the potential to be very significant.

The fact is that the nuclear deal only addressed one issue having to do with the Islamic Republic. The globally significant issues coming out of that country are manifold, and some of them have the potential for much more immediate and broad-ranging impact.

Whereas the nuclear deal succeeds in pushing the threat of an Iranian nuclear weapon several years into the future, there are other things that could be done right now to quickly halt Iran’s destructive behavior.

High on the list of such measures is an idea that was already floated by President Trump in his first weeks in office, when he suggested designating the Iranian Revolutionary Guard Corps (IRGC) as a foreign terrorist organization and cutting off its access to American dollars to the greatest extent possible.

Whether President Trump broached the subject with Macron remains to be seen, but the French president should certainly take it upon himself to make a commitment to confronting Iran’s sponsorship of global terrorism. The IRGC is the main driving force behind that, and it is also perhaps the source of the most severe crackdowns on Iranian activism and civil society.

In this sense, an international blacklist of the IRGC could serve not only to shrink Iran’s influence on nearby areas like Syria and Yemen but also to greatly diminish the power of the clerical regime at home, thereby improving the prospects for regime change driven by the overwhelmingly pro-Western and democratic Iranian people.

The French capital was the site of a major international rally for Iranian regime change just two weeks before Thursday's meeting with President Trump. The opposition coalition known as the National Council of Resistance of Iran held its annual gathering in Paris on July 1, with attendance from tens of thousands of Iranian expatriates and hundreds of political supporters spanning Europe, the Americas, and much of the world.

NCRI President Maryam Rajavi used the opportunity to call attention to the thousands of protest actions that had taken place in Iran over the past year in defiance of the omnipresent risk of suppression and torture. The popular demand for regime change that was on display in the 2009 uprising is still bubbling beneath the surface of Iranian society, waiting for the conditions to be right for its reemergence. By blacklisting the IRGC, the international community can help to create those conditions and improve the prospects for an Iranian government based on Mrs. Rajavi’s progressive 10-point plan.

Western voices should be focused on promoting the kind of future for Iran that will make it both a stable and a moral investment. President Macron and President Trump can take the lead in this, and if their talks in Paris demonstrate progress, other Western leaders will definitely take note, as well as the disenchanted Iranian people.