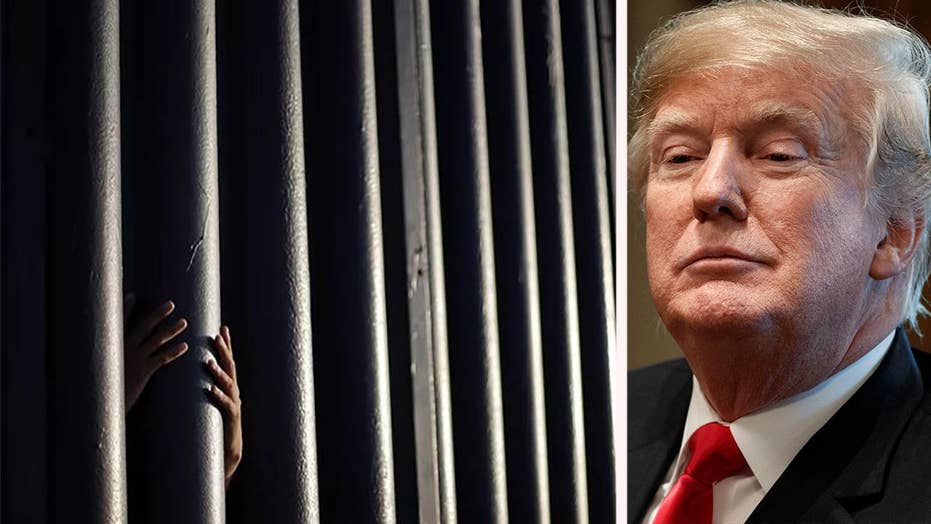 White House officials say one way or another, President Trump will get the funding he wants to build the border wall

The president appears to back down from his initial shutdown threat over border security funding but tweets that the wall will be built; Kevin Corke has the latest from the White House.

The $5 billion President Trump wants to spend on a “big beautiful border wall” is not a wise use of your hard-earned tax dollars.

On top of that, the president was insisting Friday that he was willing to partially shut down the federal government – costing even more tax dollars – to get that $5 billion. During his election campaign, candidate Trump told us repeatedly that Mexico would pay for the wall, but Mexican officials made clear then and now that this will never happen.

Not only are there far better and more necessary ways to boost border security, but the wall won’t win back suburban voters who deserted Republican candidates in the November midterm elections and handed control of the House of Representatives to the Democrats.

Granted, advocating for the wall may garner votes in Republican primaries – but it will lose votes for GOP candidates in general elections. So the wall is not only bad policy – from a Republican point of view, it is bad politics.

To be clear, border security is critical. No serious policymaker is suggesting open borders – letting everyone who wants to come to the U.S. enter our country without limit.

President Trump’s claim that opponents of his wall are calling for open borders and want to allow gangs of rapists, murderers and terrorists to stream across our southern border to attack Americans and flood our communities with dangerous illegal drugs is hype.

The scary images conjured up by the president are designed to create a crisis atmosphere where no crisis exists, so his wall can gain public support and so he can pressure Congress to approve funding for the wall.

But let’s get real: There are already more than 650 miles of barriers on our southern border. Building a wall would not address needs such as: more robust training for the Border Patrol; new infrastructure and additional personnel at ports of entry; physical barriers where they make sense at key locations along the border; and a border policy that strengthens commerce and our nation’s economic competitiveness.

The truth is that far from there being a crisis on our border, unauthorized immigration is actually down 13 percent from its peak in 2007.

Instead of demanding his wall, President Trump should demand that Congress provide the Customs and Border Protection (CBP) Office of Field Operations – which oversees immigration and commerce at the country’s 328 ports of entry – with funds for more staffing.

CBP is short at least 1,100 officers at ports of entry, the Government Accountability Office reported earlier this year.

A wall won’t halt the flow of illegal drugs at ports of entry. Despite what the president tweets, CBP statistics show that 81 percent of hard drugs intercepted along the southwest border between 2012 and 2016 were seized at ports of entry.

In other words: you can build a wall to the sky, but it won’t stop drugs from getting into our communities.

And understaffing at ports of entry is not only a security problem. It is also an economic one.

CBP estimated in 2014 that every additional individual field officer at a port of entry would result in annual benefits of $2 million to America’s gross domestic product.

The added flow of commerce for each additional field officers would yield $640,000 saved in opportunity costs and create 33 new jobs.

Intelligent border security could be the foundation for a sensible compromise that President Trump could forge with congressional Republicans and Democrats to advance America’s security and economic interests – and perhaps even unite us.

Such a deal also could encourage economic growth by making it easier for talented innovators and graduates with advanced degrees to come to the U.S. and stay here.

As the global battle for talent intensifies, we need legal ways for more entrepreneurs from around the world to set up shop here in America.

We also need paths for more individuals such as skilled farmworkers and construction laborers to fill positions that will boost economic growth. Both political parties want a strong economy, and a sound legal immigration process is core to that pursuit.

Men, women and children don’t flee their homelands unless their situation is untenable. As part of an immigration deal, the U.S. should increase its investment in the security and economic development of Central American countries to discourage people from fleeing in the first place.

At the same time, drawing on our compassion and respect for human dignity – not to mention U.S. and international law – we should welcome refugees and hear the claims of asylum seekers. American leadership should include moral leadership.

Finally, undocumented men and women who are working hard and contributing to America – starting with Dreamers brought here as children and people with temporary protected status – should have a way to earn full legalized status and eventual citizenship. It’s the right thing to do morally and politically, and it’s in the best interest of our economy and our security.

Instead of using a battle over wall funding to continue to polarize us, President Trump and Congress should start the era of divided government that begins in January by coming together and solving major challenges.

The president just scored a major victory by working with Republicans and Democrats to pass criminal justice reform in the First Step Act. With some foresight and deal-making, he could do the same on immigration.

Jacinta Ma is the director of policy and advocacy at the National Immigration Forum.