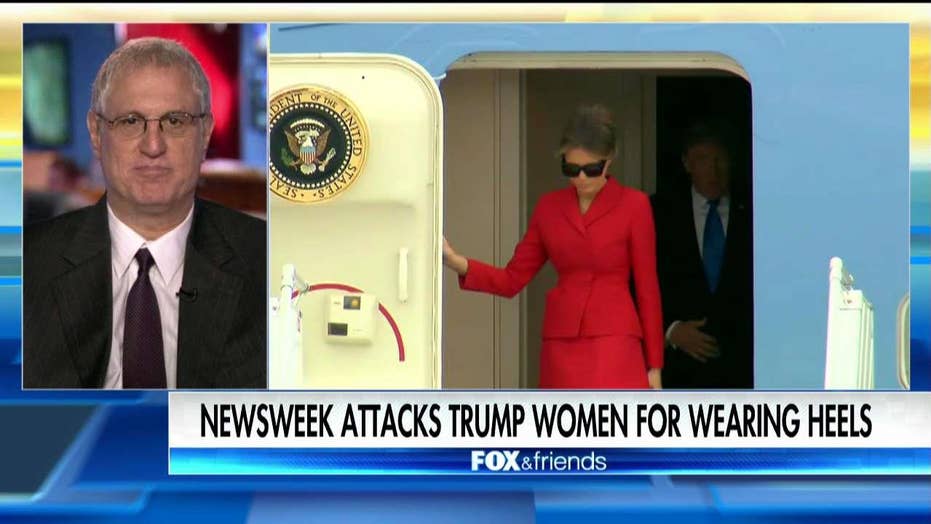 Feminists went all-out Mean Girls on Melania and Ivanka Trump, when a Newsweek piece called them out for — wait for it — wearing high heels.

I love a good pair of stilettos, block heels, wedge, you name it, but according to Nina Burleigh over at Newsweek, heels symbolize everything that is wrong with the Trump women. That’s quite a bridge to cross following any kind of logic, none of which exists in the piece.

U.S. President Donald Trump and first lady Melania Trump part on the tarmac after they arrive on Air Force One at Orly Airport south of Paris, Thursday, July 13, 2017. The president and first lady will attend the Bastille Day parade on the Champs Elysees avenue in Paris, France, on Friday, July 14, 2017. (AP Photo/Carolyn Kaster) (AP)

According to Ms. Burleigh, whom I picture as a sensible shoes kind of girl, stilettos are not in fashion.  That’s probably news to Jimmy Choo, Christian Louboutin, or any of the other top designers on 5th Avenue.  But so what either way?  If the Trump women enjoy wearing shoes that make them feel good, why berate them for their choices?

As much as Ms. Burleigh wants stilettos to reflect character, they do not, but being nasty about those wearing them does.

High heels were around long before Ms. Burleigh decided to go all puritanical on us.  Her article suggested that those dirty shoes appeared earliest on the feet of Italian prostitutes in the 17th century.  Actually, no, Persian horseback riders first used high heels in the ninth century to help keep their feet from slipping out of the stirrups. The Bata Shoe Museum in Toronto even showcases a 17th century Persian high heel.

Melania Trump wears a black Dolce &amp; Gabbana dress prior to a group photo during the spouse and partner program at the Royal Palace of Laeken, near Brussels on May 25, 2017. (AP)

And in the 1600s, King Louis XVI decided that red high heels would be a status symbol of nobility (plus, he was on the shorter side so the height helped him out).

While stiletto pumps are not for everyone and do require a certain amount of grace and stability on behalf of the women who dare to don a pair, many women wear them because they make women feel good and look good.  They can bring a certain air of power to women.  While the famous stiletto designer Christian Louboutin has been quoted saying that his work is geared towards pleasing men, women adore those red-soled heels.  Why? Because they look good, and women feel dressed up wearing them.  In fact, according to the Huffington Post, historically, in times of economic downturn, sales of both lipstick and high heels go up.

So why does any of this have to be political in nature?  Imagine if a conservative writer wrote this piece about any shoe choice of Michelle Obama.  It would be the front-page headline.  Do feminists truly have nothing else to write about these days?

Even liberal women like Hillary Clinton, Cecile Richards, and Nancy Pelosi all wear high heels.  Ms. Burleigh would not dare to casually mention them in the same article as Italian prostitutes.  As much as Ms. Burleigh wants stilettos to reflect character, they do not, but being nasty about those wearing them does.

This is just a catty way for a liberal woman to take a swipe at women who not only wear, but profit from, high heels.  Maybe she would change her mind if she tried on a lovely pair of Ivanka Trump shoes.  They not only look nice but are actually pretty comfortable.

Ironically, I first read the Newsweek piece while sitting in my podiatrist’s office.  I wasn’t there because of my stiletto habit, but rather one that stemmed from running (in running shoes).  Left-leaning women and women right of center have serious policy conflicts.  Fashion, Tom Ford aside, is wonderfully neutral.  Let’s keep it that way.