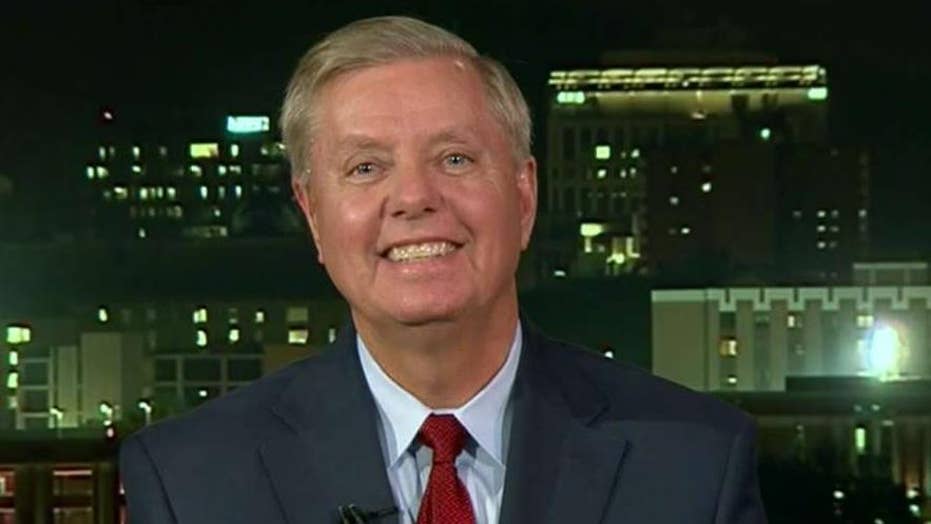 Sen. Graham confident Mueller will be allowed to do his job

Now that the midterm elections are over, I believe that Special Counsel Robert Mueller is probably just weeks away from finishing his investigation of Russian interference in our 2016 presidential election and possible cooperation between the Donald Trump campaign and Russia to put Trump in the White House.

In fact, some news organizations were reporting Thursday that Mueller’s team has begun work on its final report. It is widely assumed that Mueller did not want to release his report during the midterm election campaign, to follow a Justice Department policy of refraining from actions during campaign season that could influence the outcome of elections.

New questions have arisen about what will happen with the Mueller probe in the wake of President Trump’s firing of Attorney General Jeff Sessions on Wednesday.

I believe the national interest demands that Mueller be allowed to finish his investigation, which began in May 2017, without interference. The investigation is our best chance of learning the truth about Russia’s malicious actions towards the United States.

Understanding what Russia has done in the past to interfere in American elections – and undermine our country in other ways – is vital not just for historical purposes, but to understand what actions we need to take to protect America in the future.

I also believe that the Mueller report should be made public. Our government has an obligation to provide the American people with the full truth about Russia’s malevolent campaign to undermine our free democratic institutions.

President Trump appointed one of his political loyalists, Matthew Whitaker, as acting attorney general to replace the fired Sessions. The president also assigned Whitaker the important role of supervisor and final decision-maker on the Mueller probe, replacing Deputy Attorney General Rod Rosenstein in that role.

Any attempt by President Trump or Acting Attorney General Whitaker to fire Mueller would severely undermine the rule of law and would draw opposition from many key Republicans in Congress who are on the record supporting the completion of the special counsel’s work.

Rosenstein has been serving as Mueller’s supervisor because Sessions recused himself from oversight of the investigation, due to his role as a prominent supporter and surrogate in the Trump presidential campaign and because he failed to disclose his contacts with Russia's ambassador to the U.S.

President Trump complained frequently and publicly that Sessions should not have recused himself, and his anger at Sessions caused an estrangement between the two men that culminated in the president’s action to force Sessions out as attorney general Wednesday.

We don’t know who the president will appoint as the permanent replacement for Sessions. That person will require Senate confirmation to take office – a task made easier by the expanded Senate majority that Republicans won in Tuesday’s midterm elections.

We can only guess at what a confirmed attorney general would do about the Mueller investigation if it is still going on. But it would be extraordinary if an acting attorney general tried to fire Mueller. I don’t think it will happen.

As a former prosecutor and FBI special agent for over 24 years, I served under Mueller for almost eight years when he was FBI director, ending my service as his assistant director overseeing all criminal investigations.

Mueller is a man of the highest integrity, and a brilliant and hardworking attorney and investigator who has never leaked to the media or grandstanded in his entire career. He is not interested in mounting a political attack on President Trump, the Trump presidential campaign, or the Trump administration. He is not part of some “deep state” conspiracy orchestrated by Democrats to overturn the results of the 2016 presidential election.

Unfortunately, the Russia investigation was tainted when it began under FBI Director James Comey, who was later fired on orders of President Trump. Comey and some of the top officials he surrounded himself with at the FBI indeed were biased against Trump. Their conduct in dealing with candidate Trump and in clearing 2016 Democratic presidential nominee Hillary Clinton of illegal conduct in her email scandal was clearly biased and wrong.

Rosenstein appointed Mueller as the special counsel after President Trump fired Comey at Rosenstein’s recommendation. Rosenstein apparently wanted to remove the Russia investigation from the jurisdiction of others at the FBI who had worked for Comey and were biased against Trump.

But Robert Mueller is not James Comey. Mueller’s investigation should not be tarred by the early days of the probe under Comey, though many people have conflated the two.

I’m confident that Mueller will pull no punches in his report and go for the truth no matter how much it hurts one side or the other. He will bring charges only is they can be proven with overwhelming evidence. He will not be motivated in the slightest by political bias.

Those of us who know how criminal cases are built are keenly aware that there is indeed probably some further action pending that will come out of the work of Mueller’s team, regardless of who is at the helm at the Justice Department.

Already, the special prosecutor has filed charges against 32 people, including 26 Russians. Four people associated with Trump or his campaign have pleaded guilty to a variety of charges, some having nothing to do with the Trump campaign. The most recent to do so was Paul Manafort, President Trump’s former campaign chairman.

President Trump has said many times that there was “no collusion” between Russia and his campaign and “no obstruction” of the Mueller investigation. In addition, the president has often called the special counsel’s investigation a “witch hunt” that is investigating “a hoax.”

Still, I think speculation that Session’s forced resignation will result in the death of the Russia investigation is greatly exaggerated.

The truth is that Sessions was at best a mediocre and subservient attorney general at the helm of a department that urgently needs strong, dynamic leadership. I wish him well, but his departure is no great loss for the Justice Department.

Under the 1999 law creating the positon of special counsel, Mueller works for the Justice Department. So the attorney general (or now the acting attorney general) has the authority to fire him – but only for "misconduct, dereliction of duty, incapacity, conflict of interest, or for other good cause, including violation of Departmental policies."

Any attempt by President Trump or Acting Attorney General Whitaker to fire Mueller would severely undermine the rule of law and would draw opposition from many key Republicans in Congress who are on the record supporting the completion of the special counsel’s work.

Congressional Democrats are already criticizing the president for firing Sessions as a possible prelude to shutting down the Mueller investigation. Their criticism is to be expected. Republican opposition is more significant.

As least 28 Republican senators have publicly expressed their support for Mueller’s investigation or warned President Trump not to fire Mueller. These include Lindsey Graham of South Carolina, John Kennedy of Louisiana, Susan Collins of Maine and Chuck Grassley of Iowa.

Chris Christie, a former New Jersey Republican governor and U.S. attorney, has warned that any attempt to end the Mueller investigation prematurely will spark opposition from within Republican ranks.

“The Mueller investigation is kind of a red line for a lot of Republicans, not only in the House but, much more importantly, in the United States Senate,” Christie said.

Even if Mueller is fired and his positon is abolished – as some are speculating President Trump wants – it would be foolish to think his the special counsel’s investigative files would be locked up and mothballed.

Instead, if Mueller is ousted his work would pass to the Justice Department and FBI. What role Whitaker or a new attorney general would play in the continuing investigation at that point is unknown.

The work of the special counsel is critical to America’s national security because for years Russian President Vladimir Putin's mafia state and his billionaire oligarch cronies have undermined our freedoms. I have no doubt the Russians will continue their activities against our country if we don’t find a way to stop them.

Since taking power, Putin has manifested the deepest animosity towards the United States and has worked aggressively and successfully to sow chaos and divide our country. He is assisted by an evil axis of his subservient intelligence services, Russian organized crime and the deep pockets of wealthy Russian business leaders.

And Russian’s actions against our country are not limited to election interference. Russian organized crime figures – aided by the Russian government – promote health-care fraud, Internet fraud, insurance fraud and investment fraud in the United States. This results in hundreds of billions of dollars in losses each year to Americans – something we can no longer turn a blind eye to.

Russians launder their billions of dollars in illicit gains by investing in real estate across the globe, including in the United Sates. They hide behind layers of offshore corporations and nominal owners. Putin's best friend, a violinist, is reportedly worth billions of dollars fronting for Putin.

Russian hackers were innovators in the early days of Internet-based crimes and espionage. This was known well before the 2016 election, but no one wanted to talk about it. A succession of U.S. presidents of both parties and corporate leaders hungry for business expansion and bigger profits have promoted robust commerce with Russia for years.

It is shameful that the Obama administration under Attorney General Loretta Lynch failed to act to investigate and expose these Russian aggressions.

But we can’t turn back time – so failures by the Obama administration are no excuse for our nation to continue failing to address Russia’s aggressive behavior against us.

We should all hope Mueller is allowed to complete his work and make his report public. At that point, our leaders and the American people can figure out what needs to be done next to defend ourselves against Russia’s many attacks against us.