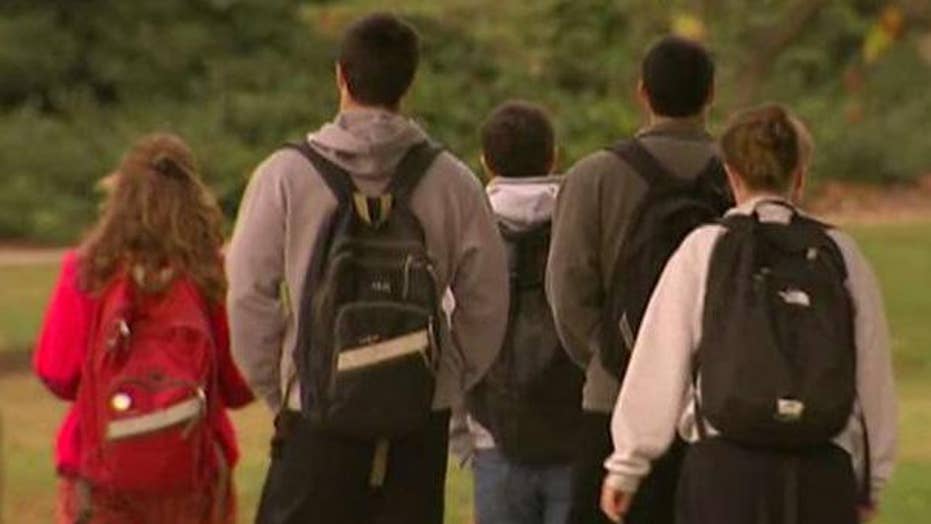 Now that President Trump has signed tax cuts into law to strengthen our economy, there’s much more to be done, starting with education reform. Three glaring problems need fixing: our underperforming K-12 schools, our politicized universities, and the enormous student debt burden.

Candidate Trump promised to revive the American Dream – the idea that whoever you are, you can get ahead, and that your kids will have it better than you did. If the dream is broken, our schools are a big reason.

We throw more money at our schools than just about any other country, and what do we get? For our K-12 school system, an honorary membership in the Third World.

Not so long ago, we had a superb public school system, but now we trail most countries. In math, we’re 38th in the world among developed countries in terms of how15 year-olds perform. And it’s getting worse, not better.

Our public schools don’t lack for defenders in the Democratic Party and the mainstream media, but the defenders can’t explain away our mediocrity.

The problem is not that we spend too little, and it’s not because of what are delicately called our “demographics.” Instead, that problem is what you would expect when an educational blob resists state-support for private schools and for schools run by religious groups.

Government funding for non-public schools plays a large part in the educational success of students in other countries, but our nation has refused to emulate the practice, even though other countries are beating the pants off of us when it comes to student performance.

Government funding for non-public schools plays a large part in the educational success of students in other countries, but our nation has refused to emulate the practice, even though other countries are beating the pants off of us when it comes to student performance.

The Democrats who tell us they’re the party of equality have thrown in their lot with teachers unions who are the main obstacle to reform. Cruel hypocrites!

Happily, President Trump has called school choice the great civil rights issue of our time. At the 2017 Value Voters Summit the president told religious conservatives that “my plan will break the government monopoly and make schools compete to provide the best services for our children. The money will follow the student to the public, private or religious school that is best for them and their family.”

The budget President Trump submitted to Congress called for $1.4 billion to be allocated to voucher programs that parents could use to pay for tuition at private or religious schools. And in time, this might be ramped up to a $20 billion program.

In another area, Education Secretary Betsy DeVos has reversed one of the more idiotic “Dear Colleague” letters that President Obama’s Education Department sent to university administrators. In a 19-page missive, the department forced universities to comply with a detailed code of quasi-criminal procedure to respond to the “deeply troubling” atmosphere of sexual misconduct and violence.

The letter encouraged the appointment of compliance officers and lowered the standard to proof of misconduct to a preponderance of evidence. It was so tilted towards prosecutions, and so very intrusive, that college administrators began to hope for a Republican administration. When DeVos rescinded the letter, even the New York Times recognized that President Obama had gone too far.

That’s a good start, but it’s time for a few new “Dear Colleague” letters. At too many colleges, conservative faculty, students and speakers are bullied and shouted down. Real education has taken a back seat to the most oppressive forms of political indoctrination.

Course catalogues have also been littered with idiotic offerings on tree-climbing and selfies. If parents want to pay for this, that’s fine. But I see no reason why such colleges should receive a cent of federal money.

Finally, there’s the student loan crisis. Like us, other countries stepped in to guarantee student loans. But unlike us, they told the universities they’d have to cap their tuition increases. We didn’t do that, so our institutions of higher learning ran up the cost of tuition way in excess of inflation.

Then colleges failed to educate the students, or worse yet still taught them radical chic courses that left them unfit for real jobs. Not that the jobs were there anyway in President Obama’s economy.

The answer is obvious. Graduates used to have the right to discharge their student loans in bankruptcy, but that right was taken from them in 1978. Back then, tuition was cheap and there were plenty of jobs. That’s no longer the case, and now the total student debt load is $1.5 trillion, with an average student debt of nearly $40,000.

Debt loads in excess of $100,000 are not uncommon. We’ve let colleges run up tuition, made debt slaves of millions of young Americans, and then we’re surprised when they’re radicalized. Let’s bring back the discharge of student debt in bankruptcy.