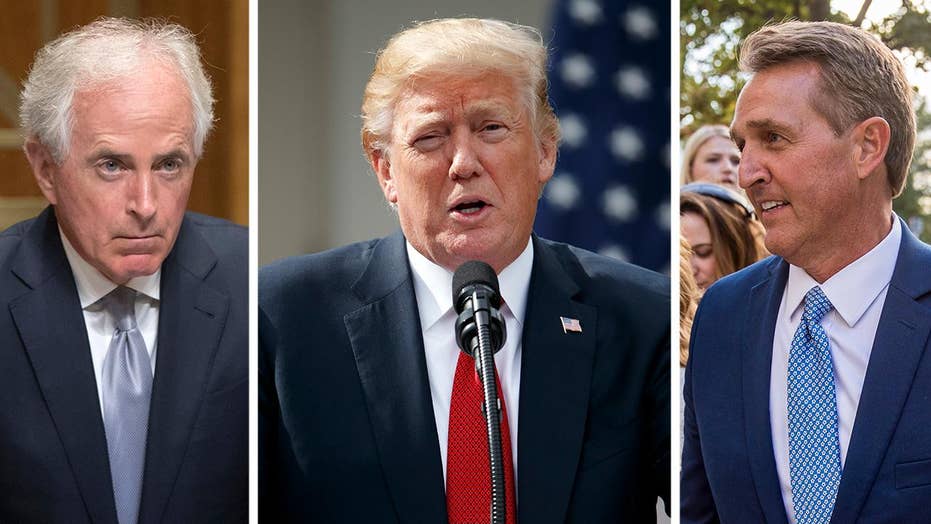 Flake, Corker go to war with Trump over his leadership

The Arizona Republican senator will not seek re-election and the Tennessee lawmaker admitted he regrets backing the president in the first place; John Roberts has the roundup for 'Special Report.'

One year after President Trump’s “drain the swamp” message propelled him to the White House, the political establishment—Democrat and Republican—is finally seeing the writing on the wall. Their days of comfort are numbered.

While the liberal media portrays Sen. Jeff Flake’s (R-AZ) recent resignation as martyrdom, the Arizona senator’s downfall is just the latest victory for President Trump—and his coalition of nearly 63 million Americans. To quote Senator Flake, Trump supporters have one word for entrenched Washington insiders masquerading as conservative reformers: “Enough.” They are rising today to say “enough” to do-nothing Republicans who have made it their mission to undermine the president’s agenda, rather than doing their part to grow the U.S. economy and make America a stronger, safer, and freer country.

In the words of Rep. Jeff Duncan (R-SC): Republicans who oppose the Trump agenda have “become part of the swamp.” He recently criticized Republicans like Senator Flake for “abandoning the conservative principles that got [them] elected.”

Don’t be fooled: Senator Flake resigned because he saw the writing on the wall. His conservative challenger, Kelli Ward, was leading in their head-to-head matchup by nearly 30 percentage points. Not only was Flake expected to lose in a general election, but he could not compete against a Republican primary opponent with unquestionable conservative bona fides—ironically, the same bone fides Flake possessed before Washington changed him.

In Arizona, Flake’s approval rating stood at 18 percent. There are many reasons for his unpopularity, but one stands out: The Arizona senator turned his back on conservative voters. As a House member, Flake’s Club for Growth score clocked in at 100 percent. Fast forward to 2016 and Flake’s score dropped to 84 percent—below Sen. Mitch McConnell’s (R-KY). The Heritage Foundation’s scorecard gives Flake a 67 percent, only slightly above an average Senate Republican and a far cry from “conservative.”

In the Senate, Flake embraced Gang of Eight amnesty proposals, sided against the Obamacare defunding effort, and pushed gun control measures. He effectively alienated the Arizonians who elected him to be a champion of constitutional conservatism.

As long as Republicans keep turning their backs on the American people, they will face primary challenges and they will lose. Sen. Bob Corker (R-TN), who foolishly decided to feud with President Trump on Twitter, saw the same writing on the wall. One of his tweets smeared the president as “utterly untruthful.” Well, here’s the truth: Only 41 percent of Tennessee Republicans believed Corker deserved to be reelected. By pandering to Democrats and pursuing liberal policies—most notably the disastrous Iran deal—the Tennessee senator acted against the interests of his constituents and sabotaged his own political career.

Fortunately for conservative Americans across the country, there is now an infrastructure in place to hold establishment Republicans accountable. My organization, Great America PAC and our allied Great America Alliance, has already engaged in successful races in Georgia, Montana, and most recently in Alabama. There, we helped former state Supreme Court Justice Roy Moore take down the Washington establishment’s well-funded choice, Sen. Luther Strange (R-AL). Moore defeated Senator Strange by double digits, sending another conservative-turned-centrist into political irrelevance.

Last year, our team placed 30 million phone calls and sent over 2.5 million pieces of direct mail. We motivated millions of active, engaged Trump supporters across the country. And we will do so again in 2018 to elect real representatives who will stand behind our president’s America First agenda and drain the swamp.

In 2016, we took our blue campaign bus on multiple national tours to get out the vote. Democrats and Republicans need to get on board with President Trump or they will be seeing the bus.