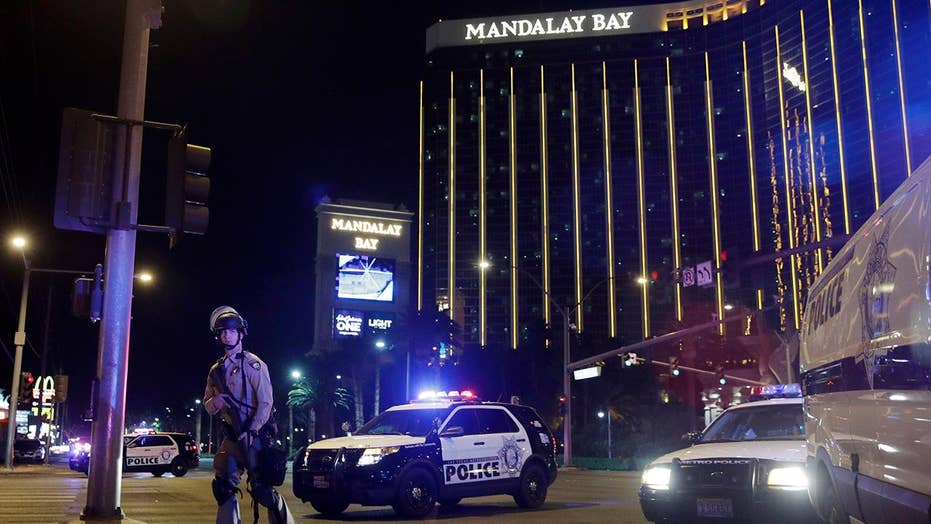 Anatomy of the Las Vegas massacre

A look at the weapon Stephen Paddock used and how he was able to wound and kill so many people from such a long distance. #Tucker

In Las Vegas, 59 people have lost their lives and over 500 have been injured in America’s worst mass shooting in recorded history.  Many thousands more were, without question, psychologically traumatized by what they saw at the scene.  Tens of thousands of friends and loved ones of those killed or harmed will be struggling with the aftermath of loss and the challenges of disability and the dark shadow of emotional injuries.  Many millions more—including all those who have seen images of the carnage of October 1 or heard the voices of those present, could experience the psychological fallout of the certain knowledge that a day of enjoyment can change, instantly, into a day of horror.

The truth is that any day can unfold, for any of us, as October 1 did for those at the country music festival in Las Vegas.  Murderous violence can obliterate the expectations we have for another day—for ourselves or those we care deeply about.  So, too, can other monstrous forces, like stroke, heart disease and cancer.

No one is guaranteed another day.  Not even another hour.  Not a minute.  We simply don’t know how many breaths we have left.  And what’s more, we don’t know how many breaths those we cherish have left, including even those for whom we would readily die.  I think here of my children, among others, and find myself knocking on the worn walnut desk under the laptop on which I am recording these thoughts.  Word by word.  Letter by letter.  Illuminated characters on a screen that seem anything but carved in stone.  Like me.  Like you.

This knocking on wood is superstition, I know, but primitive psychological tools to ward off feelings of vulnerability sometimes feel essential.  We hang, all of us, by the finest of threads.  We are all Job.

It is how we act, in the moment, that matters—not how many moments we have or even what they are made up of. We can claim certainty about our lives by claiming our courage and character and compassion.

Our minds have many defenses to distance ourselves from how fragile we really are—denial, chief among them.

But, then, there are days like October 1 in Las Vegas, that shatter those defenses, and we feel as exquisitely vulnerable as we truly are.  How do we deal with the underlying anxiety, even panic, thus exposed—that delicate underside of our false certainties about life.  How do we go on?

I know only one path, which has become visible to me from talking deeply, for hours and hours, with thousands of people living through the most unexpected, gripping, affecting chapters of their life stories: Summoning as much certainty as is humanly possible to believe, in our hearts, that what shall matter most is not what we face, but how we face it —how we acquit ourselves as life’s unpredictable pages turn, inexorably.  For if we focus on demonstrating character, as individuals, as families, as neighborhoods, as cities and as a nation, we will realize that we can win the challenge of any and every unpredictable crisis.  Because we humans can, with acts of will, turn mortal and unexpected and horrible moments into stories of the triumph of human spirit, of courage over fear, of resolve over surrender.

Acknowledging that we have this God-given strength and that we can strive to be measured by it, rather than by our vulnerabilities, is the key to moving beyond madness when it unfolds or even beyond mortality.  It is an ace up our sleeves as human beings.

I think of those under fire in Las Vegas who risked their own lives to save the lives of others.  I think of the police officers who rushed to the scene, not away from it.  I think of the nurses and doctors receiving the hundreds of wounded people in emergency rooms.  But, I also think of the fathers and mothers and sisters and brothers and dear friends and neighbors of those harmed who will extend themselves to those they love, in order to help them heal.  I think of the injured themselves who will greet every new day changed forever by October 1, 2017.  And the hair on my arms stands on end.  What is that, if not my connection to the certain knowledge that it is how we act, in the moment, that matters—not how many moments we have or even what they are made up of?

We can claim certainty about our lives by claiming our courage and character and compassion.

Millions whose lives were impacted on October 1, 2017 by the events in Las Vegas will take that journey in the coming days and weeks and months and years.  And that is evidence that while we are physically fragile beyond measure, we have reserves of spiritual strength that are just as immeasurable.  And that is truly worthy of marvel.  For that is truly the miracle of human life.

Onward, we move.  Inexorably.  As individuals.  As families.  And as a people.  We cannot be turned back.