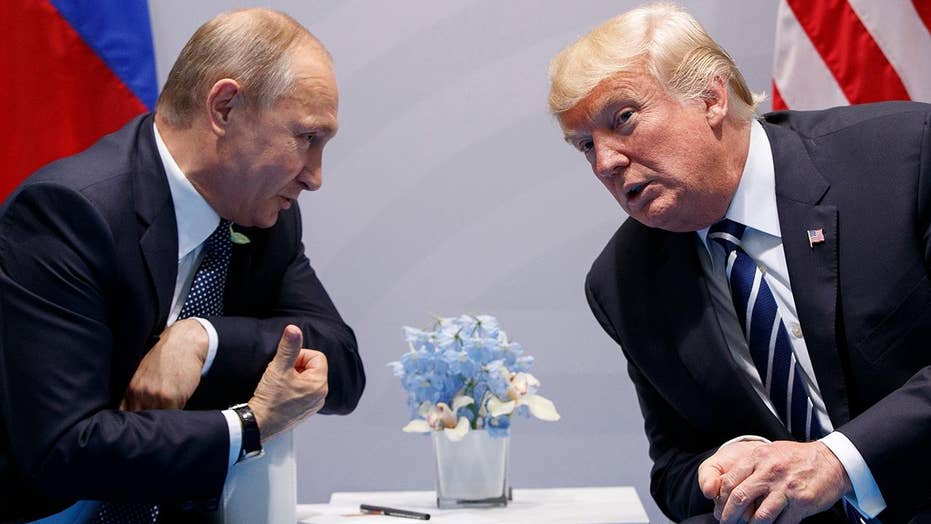 Officials say the sanctions against Russia have been in the works for months. Ellison Barber has the latest from the White House.

Action by the Trump administration Friday imposing its most aggressive round yet of economic sanctions against Russian politicians, oligarchs and companies is a welcome and long overdue development.

The new sanctions are a vital, although small, advance against the Russian government’s overt corruption, oppression and aggression. It is essential now that the Trump administration and Congress support implementing and enforcing measures like this to weaken Russian President Vladimir Putin’s regime economically, politically and militarily.

It is time, at last, to show Putin that the United States will stand firm and do everything in our power to thwart any and all of his advances against us and against the democratic values upon which America was built.

In his official announcement of the new U.S. sanctions, Treasury Secretary Steven Mnuchin said: “The Russian government operates for the disproportionate benefit of oligarchs and government elites. Russian oligarchs and elites who profit from this corrupt system will no longer be insulated from the consequences of their government’s destabilizing activities.”

These latest sanctions send a clear message to Putin that the United States is willing and able to take actions against the Russian government that will have large and potentially destabilizing impacts on his regime.

Specifically, the sanctions are aimed at seven Russian oligarchs (extremely rich and powerful businessmen) and the 12 companies they control, 17 senior Russian government officials, and a state-owned Russian weapons trading company.

By targeting the oligarchs and political elites who profit from the Russian government’s corrupt and destabilizing aggression around the world, the new sanctions are not only a good step – they are a necessary step.

Economic and military defensive actions are the primary way for the United States to put a stop to Putin’s rogue behavior at home and abroad – especially as he plays an increasingly dangerous role in North Korea, Iran, and Syria by propping up their violet and oppressive regimes and authoritarian leaders.

From his malicious cyberattacks attacks during the 2016 election, to supporting North Korea’s   nuclear missile program with Soviet technology, Putin has revealed time and time again that he is ruthless and knows no bounds.

These latest sanctions send a clear message to Putin that the United States is willing and able to take actions against the Russian government that will have large and potentially destabilizing impacts on his regime.

But sanctions are only the beginning – not the end – of a stronger U.S. policy toward Russia. It is equally vital that the U.S. effectively counter Moscow’s militaristic aggression by bolstering NATO politically and militarily, specifically in the Baltic region.

NATO’s deployment of allied troops in each of the Baltic States is a significant and important effort to counter Russia’s aggressions, though it is not nearly strong enough.

The U.S. must also urge its NATO allies to deploy permanent troops to the Baltic States, as this will convey to Putin that his aggressions in the region and in surrounding regions will not be tolerated.

In addition to bolstering military defenses, it is also vital that the U.S. focus intently on enhancing our cybersecurity, which currently represents a major vulnerability.

Rather than punishing Russia for one specific action, the new sanctions are in response to what U.S. officials call the Russian government's ongoing and increasingly brazen pattern of bad behavior.

This is especially important as our November midterm elections draw closer. Numerous intelligence agencies have confirmed that attempts by Moscow to infiltrate our elections through cyberattacks will only grow in magnitude until we devise a system to stop them.

Enhancement of U.S. cybersecurity largely falls into the hands of our intelligence agencies at home. But it is also vital that our nation begin to create cyber partnerships among NATO members to collectively develop a methodology for cyber cooperation that will effectively counter Russian interference in U.S. elections – as well as in all Western elections that have the potential to be undermined.

Putin said in 2005 that the breakup of the Soviet Union in 1991 was the “greatest geopolitical catastrophe” of the 20th century. His ultimate goal is to use every opportunity to restore Russian power and influence back to the glory days of Soviet strength.

Putin will not be stopped by smiles, flattery and appeasement. He will only be stopped if he is compelled to do so. And the United States is the only nation on the planet powerful enough to lead the effort to make him back down.