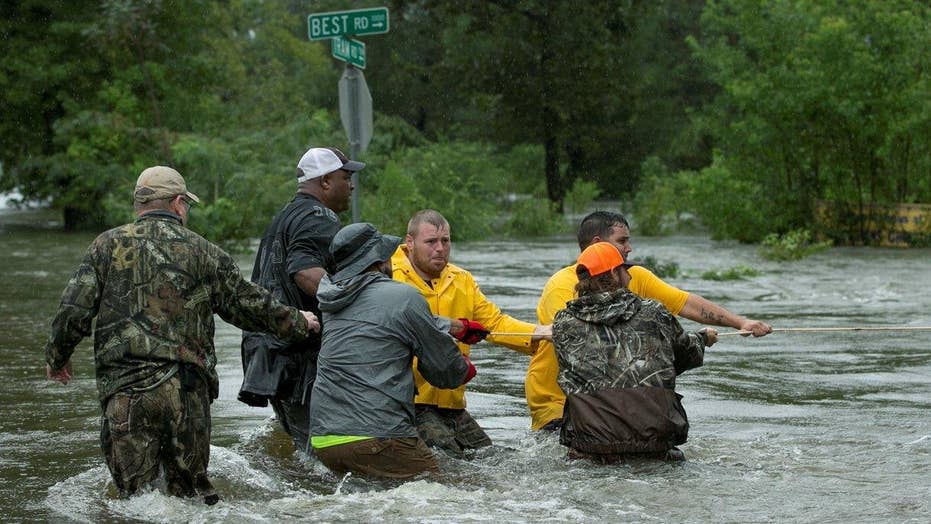 NOAA lists extreme weather events as one of several phenomena occurring more frequently due to climate change, but attributing specific storms is 'much harder;' James Rosen explains on 'Special Report'

After seeing the terrible flooding, property destruction, power outages and tragic deaths caused by Hurricanes Harvey and Irma, we all wish we could do something to keep future hurricanes from forming or make them less severe. Unfortunately, we can’t.

But despite what you hear from environmental extremists – who oppose the use of oil, coal and natural gas – even if we stopped using these fossil fuels tomorrow hurricanes would still be part of our natural world. They always have been and always will be.

Radical greens and their political and media allies have latched onto the suffering caused by Harvey and Irma to advance their ideological jihad against fossil fuels. They want to keep these valuable resources locked up underground and never used to provide the efficient, reliable and affordable energy that makes our economy and modern life possible.

The extremists don’t care that ending our use of fossil fuels would dramatically reduce our living standards by making energy much more scarce and expensive, or that the poor would suffer far more than the wealthy.

My geology, ecology and natural resources background taught me that climate change has been “real” throughout our planet’s history, including long before humans walked the Earth.

Some on the left are also using Harvey and Irma as yet another weapon in their non-stop attacks on President Trump, his administration, Republicans and our very way of life.

My geology, ecology and natural resources background taught me that climate change has been “real” throughout our planet’s history, including long before humans walked the Earth. I’ve studied climate change, spoken at length with dozens of renowned experts, and written numerous articles explaining climate, energy and environmental issues in lay terms.

I’ve learned to be humble, respectful and vigilant in the face of nature’s power; to recognize that climate change can range from beneficial or benign to harmful or unbelievably destructive; and to understand that the sun and other powerful natural forces totally dwarf whatever meager powers humans might muster in attempting to control Earth’s climate and weather.

Hurricane Harvey marked the end of a record 12-year absence of Category 3 to 5 hurricanes hitting the U.S. mainland. If global warming was the reason our nation is being battered by major hurricanes this year, how do you explain their absence for the past dozen years? There hasn’t been such a long period when the U.S. was free of major hurricanes since 1860 to 1869.

The National Oceanic and Atmospheric Administration’s Hurricane Research Division counts ten Category 4 and 5 monster hurricanes in the U.S. between 1920 and 1969 – but only three between 1970 and 2016, when our planet was warming more rapidly. If warming causes more severe hurricanes, the number of big storms should have been greater in the latter period and fewer in the earlier part of the 20th century.

If Harvey’s rainfall was due to growing fossil fuel use and atmospheric carbon dioxide, how do you explain previous deluges like Hurricane Easy (45 inches in Florida in 1950), Tropical Cyclone Amelia (48 inches in Texas in 1978) and Tropical Storm Claudette (a record 43 inches in 24 hours on Alvin, Texas in 1979), when global fossil fuel use was much lower?

Natural factors not affected by manmade climate change played a key role in enabling Harvey and Irma to strike with such devastating force.

WeatherBELL Analytics chief forecaster Joe Bastardi explains that a large (and predicted) cool trough trapped Harvey and kept it from moving inland, enabling the Gulf of Mexico to feed it trillions of gallons of water for days,

It was “an unusual confluence of events,” said Weather Channel founder John Coleman, “but it was certainly not unprecedented.”

If there was a “human factor” in Harvey and Irma, climate alarmists need to explain exactly where it was, how big it was and what role it played. They must present hard evidence to show that fossil fuels and carbon dioxide emissions played a significant role compared to the hundreds of natural forces involved in these storms. They have done none of these things and cannot.

The Atlantic, Caribbean and Gulf of Mexico are warm enough every summer to produce major hurricanes, says climatologist Roy Spencer. But you also need other conditions that have unknown origins and mechanisms: pre-existing cyclonic circulation off the African coast, upper atmospheric calm, and sea surface temperatures that change on a cyclical basis in various regions, to name just a few.

The combination of all these factors – plus weather fronts and land masses along the way – determines whether a hurricane arises, how strong it gets, how long it lasts and what track it follows.

Damage from hurricanes has certainly increased over the years. But that’s because far more people now live and work in far more homes and businesses in many expensive communities along America’s Atlantic and Gulf Coasts. Since 1920, Greater Houston grew from 138,000 people to 5.7 million; Miami from 43,000 to 6.1 million; Tampa from 50,000 to 3 million.

Meanwhile, hurricane death tolls have declined dramatically over the years, despite much larger populations today in areas in the path of the storms. This is thanks in part to fossil fuels that enable us to construct stronger buildings; track storms; evacuate and rescue people; and bring in water, food, clothing, and materials to rebuild.

Our Earth is a complex, wondrous, resilient planet. But it can unleash incredible fury. Wealthy, technologically advanced nations fueled by oil, natural gas, coal and nuclear power are far better able to avoid, survive and recover from those disasters.

Paul Driessen is senior policy analyst for the Committee For A Constructive Tomorrow and author of “Eco-Imperialism: Green Power, Black Death” and other books on the environment.