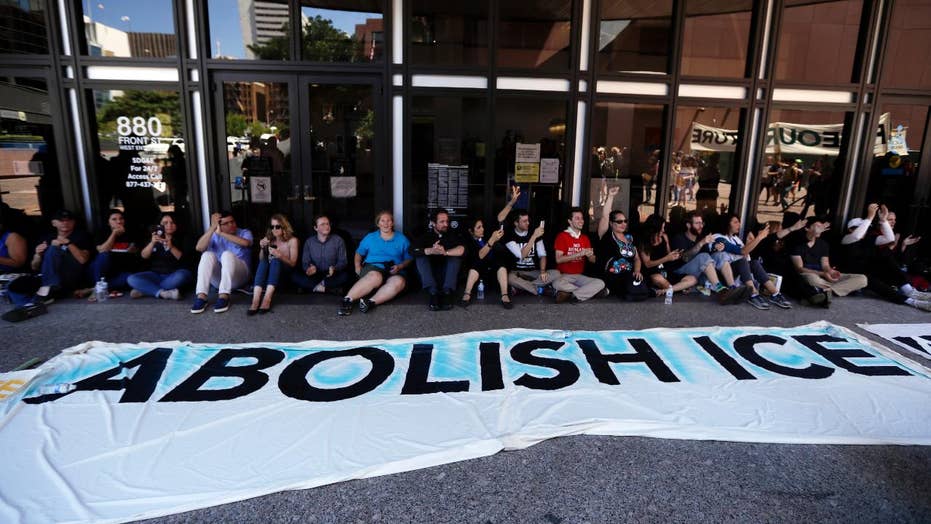 Future of immigration agency up for debate.

With controversies over the separation of families and zero-tolerance of immigration law violations at the border still in the headlines, immigration advocates and a few Democrats in Congress are calling for the dissolution of the Immigration and Customs Enforcement (ICE) agency.

Conservatives have countered that ICE employees are law enforcement officers who keep Americans safe. While most members of ICE are indeed hardworking federal employees who investigate and apprehend criminals, under the Trump administration the agency has altered its focus.

As a result, ICE should be thoroughly reviewed, assessed, and potentially restructured – and its senior officials reassigned.

There is a common misconception that Immigration and Customs Enforcement is a longstanding American law enforcement institution. In reality, ICE was formed in 2003, after the terrorist attacks that occurred on September 11, 2001. It is part of the Department of Homeland Security.

ICE was a consolidation of many agencies, with a variety of duties. Simple border security is technically not ICE¹s role. That responsibility falls under the umbrella of U.S. Customs and Border Protection, more commonly known as CBP or the Border Patrol.

ICE investigates everything from terror cells to child pornography, and has 20,000 employees stationed in 46 different countries. The positive side of having all of these concerns under one umbrella is that communication between different agencies and specialists is streamlined. However, the downside is that the overall mission can get muddled.

Some ICE agents are concerned that the Trump administration¹s focus on immigrant families – an increasing number of which have no ties to drug cartels, street gangs, or other international criminal organizations – is obfuscating the agency¹s primary objectives.

Some ICE agents are concerned that the Trump administration¹s focus on immigrant families – an increasing number of which have no ties to drug cartels, street gangs, or other international criminal organizations that would fall under the purview of ICE – is obfuscating the agency¹s primary objectives.

ICE was born out of concern that organized criminal factions could infiltrate our country. Some ICE agents now want to be separated from the immigration detention and deportation proceedings, and want ICE to essentially be dissolved into two distinct agencies.

The frustrations of these agents are being heard along with the cries of immigrant families.

Rep. Jim McGovern, D-Mass., has called for the abolition of ICE, saying that the Trump administration has moved the objectives further away from getting rid of criminals.

Rep. Mark Pocan, D-Wis., has called out President Trump and his team for misuse of ICE and plans to introduce an ICE abolition bill. The bill already has the support of Rep. Raul Grijalva, D-Ariz., and Rep. Mike Capuano, D-Mass.

Democratic U.S. House candidate Alexandra Ocasio-Cortez in New York City, who stunned the political world by defeating Democratic Rep. Joe Crowley in a primary for his seat last month,  is campaigning by calling for an end to ICE.

While the Obama administration received its share of criticisms from immigration advocates, by the end of the administration the vast majority of the people deported by ICE had a criminal conviction or pending criminal charges.

The Trump administration views crossing the border without authorization as a crime in and of itself and thus, sees the undocumented immigrants as criminals.

The Obama administration spoke of pathways to citizenship but was stifled by a deadlocked Supreme Court. Obama officials said their desire was to rid our streets of undocumented people who commit serious crimes.

The Trump¹s administration’s view is very distinct. While the president often invokes the name of the murderous street gang MS-13, his administration views all undocumented immigrants as in violation of the law and criminal, regardless of how they live their lives.

Trump administration officials have become even more aggressive than the Obama administration, which set records for deportations. President Trump also has the benefit of a Republican Congress and a Supreme Court majority, which could get even larger given the advanced ages of Justices Stephen Breyer and Ruth Bader Ginsburg.

There is not one person on the progressive left who wants to weaken our national security. On the contrary, they want to refocus on it.

While abolition of ICE has been the recent rallying cry for some, the better description of what’s needed for ICE is restructuring. We want ICE or whatever comes after it to protect us from cyber criminals, human traffickers, gunrunners, and international drug cartels – not farm workers, day laborers, college students and children.

President Trump’s dehumanizing rhetoric of the U.S. being “infested” by undocumented immigrants has damaged public trust in ICE and has demoralized some of its agents. Now is as good a time as any to restructure and rebrand the agency.