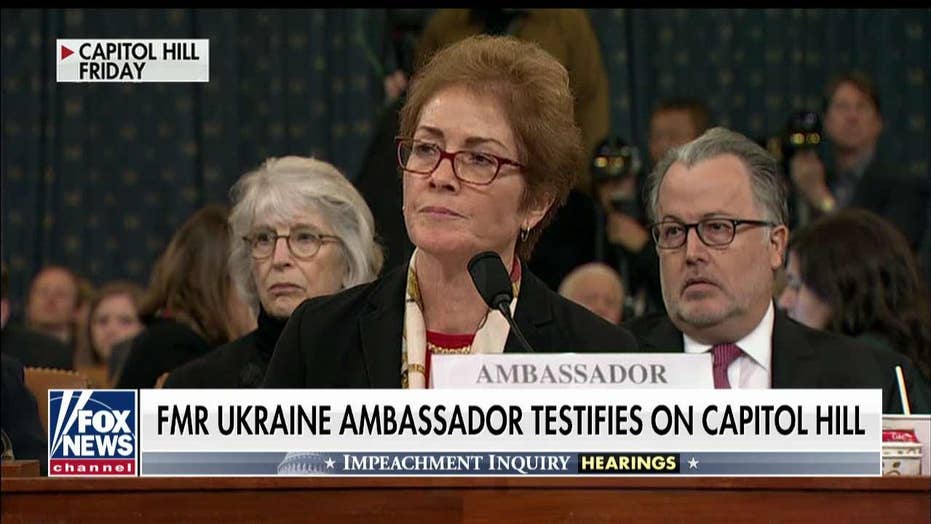 Regardless of whether President Trump is impeached or convicted, former U.S. Ambassador to Ukraine Marie Yovanovitch will be the most remembered among the witnesses at the House Intelligence Committee’s impeachment hearings. She is both a genuine heroine and an example of how our system is failing us.

Ambassador Yovanovitch sat tall before the committee last week, looking directly at those who were questioning her as she answered them without hesitation. No matter how she was attacked, how her service for our country was minimized by some (including by President Trump in a tweet), she remained unruffled.

In a soft and steady voice, Yovanovitch focused on the facts. No one on the committee, try as they might, could get her to take a cheap shot or make an unkind remark.

LEGAL ANALYSTS REACT TO MARIE YOVANOVITCH'S TESTIMONY, AGREE DEMOCRATS DON'T HAVE A LEG TO STAND ON

I could see when she was shocked or upset only when she raised one carefully groomed eyebrow. That was it! As someone who has been known to hit back pretty hard, I was in awe of her cool in the face of so much heat being thrown in her direction.

As Yovanovitch spoke and told her story, the whole world saw a good person and a thorough professional – someone humble, smart, dedicated and firm in her values.

Her story is an immigrant’s American Dream. Her parents fled communist Russia to Canada, where she was born. When she was just a toddler, they moved to the United States.

Right out of Princeton, Yovanovitch was hired by the U.S. State Department and has served honorably under six administrations – four Republican and two Democratic. She moved steadily up the hierarchy at the department and won awards in many of the places she served.

People often think of serving in an embassy is a non-stop party, constantly hosting leaders, business executives and civic groups to advance our national interest and demonstrate the joy of the American way of life. Yovanovitch was not always in a post where it was wise to party.

How Yovanovitch was treated showed how easily corrupt people can undermine our nonpartisan Foreign Service by convincing career politicians to spread disinformation about an ambassador.

In the 33 years she served, Yovanovitch moved 13 times – including five times to hardship posts like Somalia, the world’s “most failed state” by some estimations, a place riddled with corruption and torn by civil war.

She served in Russia during an attempted coup where she was literally caught in the crossfire. She needed to get to the embassy while there was gunfire in the streets. She had to try three times to get to her car, dodging bullets without the benefit of body armor or even a helmet.

That was the steel I saw in her spine as I watched her testify. Yovanovitch’s posture is that of a woman who has faced down bullets to live her values.

As she said about her parents in her opening testimony: “Their personal history – my personal history – gave me both great gratitude to the United States and great empathy for others – like the Ukrainian people – who want to be free.”

It was her commitment to keep her oath to support and defend the Constitution that got Yovanovitch removed as our ambassador to Ukraine – ordered back to the U.S. suddenly despite her outstanding performance as ambassador.

Yovanovitch was America’s “point person” for fighting corruption in Ukraine, mostly pressuring prosecutors who refused to prosecute. In the course of doing this, she angered people deeply involved in corrupt activities, especially in the energy industry.

When she saw President Trump’s personal attorney Rudy Giuliani, former Special Envoy to Ukraine Kurt Volker and U.S. Ambassador to the European Union Gordon Sondland trying to pull off their caper for President Trump, Yovanovitch knew where to draw the line.

It is one thing to use the resources of the United States to advance our stated policy to fight corruption in Ukraine. It’s another thing altogether to use those same resources, as I believe Trump did, to bribe a foreign president to smear a political rival – former Vice President Joe Biden.

As Yovanovitch testified, I imagined her first meeting with Giuliani appearing in front of her desk, thinking he’d just brush this dame aside and go about his business. What he saw looking back at him was what we all saw when she testified.

Giuliani didn’t even try to outmaneuver her. He knew he had to get her removed from her post.  Yovanovitch had just agreed to extend her tour until 2020 when Giuliani started his smear campaign, and it succeeded quickly. Yovanovitch got yanked out of Ukraine – told to take the next plane out of the country.

How Yovanovitch was treated showed how easily corrupt people can undermine our nonpartisan Foreign Service by convincing career politicians to spread disinformation about an ambassador.

Why didn’t the State Department stick up for her, clearly one of our best? The shameful circumstances of her departure justify the question Yovanovitch asked during her testimony: “How could our system fail like this?”

Ambassador Yovanovitch, I hope in the end that the system does not fail. If it has failed you, it has failed all of us, and we must work to rebuild it as soon as we can.

People sometimes talk about the American Experiment and I can see that. Two hundred plus years and we’re still trying to figure things out. And others describe it as the American Dream.