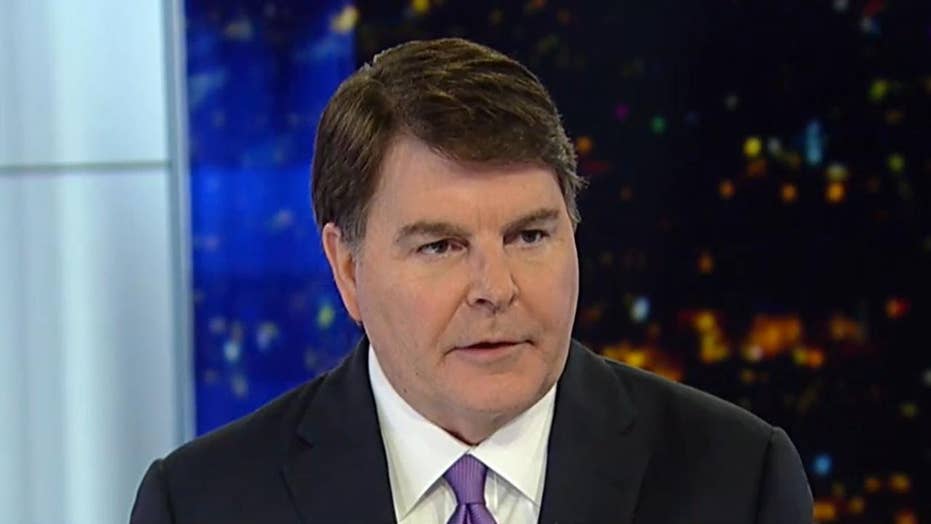 Gregg Jarrett: The 'resistance' on steroids

There is a stark difference between truth and opinion. Truth derives sustenance from facts, whereas opinion is a judgment influenced by prejudices. Leonardo da Vinci recognized the fallible nature of opinions when he observed: “The greatest deception men suffer is from their own opinions.”

Deception was on full display Tuesday during the House Intelligence Committee’s impeachment hearing, where opinions masqueraded as facts. Diplomatic witnesses offered their interpretations and judgments of a telephone conversation between President Trump and Ukrainian President Volodymyr Zelensky.

Democrats yearn to impeach Trump over a purported “quid pro quo” that is found nowhere in the transcript of the phone call.

Bereft of facts, Intelligence Committee Chairman Adam Schiff, D-Calif., is determined to remove Trump from office based purely on the opinions of others who surmised or imagined that Trump demanded that Ukraine investigate former Vice President Joe Biden or the U.S. would withhold $391 million in military aid to Kiev. Ukraine never launched such an investigation, and the financial support was delivered.

Anyone can read the transcript, as it is available online. It speaks for itself and is the best evidence that there is no evidence at all of a “quid pro quo.”  This was corroborated by the statements of Zelensky, who confirmed that there was no demand, threat, condition or pressure applied by Trump. It was a “normal” conversation, he said.

Indeed, the Ukrainian government never knew that U.S. aid had been temporarily frozen until almost five weeks after the July 25 Trump-Zelensky call. This renders a “quid pro quo” a legal impossibility.

The recipient of the “quid” must, at the very least, be aware of the “quo.” Moreover, two of the testifying witnesses readily conceded that the frozen aid was “consistent with administration policy.” So much for the infamous “quid pro quo.”

No matter. Schiff called four witnesses Tuesday to render their gratuitous opinions that were conjured up from either a remarkable feat of telepathy or borne of prejudice.

Taking center stage was Lt. Col. Alexander Vindman, a staffer on the National Security Council who listened to the Trump-Zelensky conversation when it occurred. No one should doubt Vindman’s patriotism. He deserves our universal respect and gratitude. It is his judgment, opinion, and actions that are suspect. He is not immune to criticism simply because of his heroic service in uniform.

After scolding Rep. Devin Nunes, R-Calif., a civilian, for not addressing him by his military rank, Vindman testified that he felt “concerned” about Trump’s conversation with Zelensky. This was nothing more than his opinion, impression or feeling. We all have them. They are a poor substitute for facts. “I was making a judgment call as a layman,” Vindman confessed.

The unvarnished truth is that Vindman did not like what Trump said on the phone call because the president did not strictly follow the notes Vindman had prepared for the discussion. In describing the call, Vindman stated: “This was not in the preparation material that I had offered.”

Instead of registering his complaint with his direct supervisor, Tim Morrison, Vindman conveyed his feelings to others. Among them was an individual in the intelligence community that Vindman won’t identify, who may be the faux “whistleblower” or source for the “whistleblower,” who then filed a complaint that doesn’t qualify under the whistleblower statute as a valid complaint. This was the conclusion of the Department of Justice in an 11-page opinion.

By his acts, it appears that Vindman was instrumental in initiating the current impeachment insanity. An unelected subordinate employee disagreed with the policy judgment of the president of the United States and sought to create havoc by disseminating (or, if you prefer, leaking) his discordant opinion.

To make matters worse, Vindman contorted the president’s use of the words “do me a favor” by asserting that Trump had made an “inappropriate demand” of Zelensky.

Inasmuch as there is no demand identified in the transcript of the Trump-Zelensky phone call, Vindman elected to impute a demand by arguing that for those who serve in the military, a request or favor for something is always considered a demand.

In other words, Vindman applied a military standard to a president who has never served in the military and has stated unequivocally that he made no demands of Zelensky. The Ukrainian president, who also did not serve in the military, is on record stating that no demand was made of him, as noted earlier. But Vindman, armed with uncommon clairvoyance, somehow knows better.

Perhaps Vindman thought that he was above the president or a super-special expert to which all individuals, including Trump, should defer. The witness was reminded of how he had touted (or exaggerated) his unparalleled credentials and authority during his earlier closed-door deposition:

The self-puffery was unbecoming, but it spoke volumes about what may have motivated Vindman when President Trump had the audacity to conduct foreign policy in a way that his NSC staffer did not pre-approve.

Schiff called four witnesses Tuesday to render their gratuitous opinions that were conjured up from either a remarkable feat of telepathy or borne of prejudice.

In reality, just how important was Vindman in the White House hierarchy? He conceded that he has never so much as met the president.

Vindman’s bias and coziness with Ukraine was underscored when he admitted that the foreign government had offered on three separate occasions to make him its defense minister. He rejected the overtures.

Not everyone who listened to the Trump-Zelensky call agreed with Vindman’s opinion that Trump’s call was “improper.” Foreign Service Officer Jennifer Williams, a special adviser to Vice President Mike Pence, called the conversation “unusual,” but testified that she did not see the need to report the matter.

Morrison was asked if anything concerned him about the call and replied “no.”  Former U.S. Special Envoy to Ukraine Kurt Volker testified that he was “never involved in anything I considered to be bribery or quid pro quo.”

Throughout the hearing, Schiff turned himself into a pretzel as he tried to rewrite the law. He shut down any questions to Vindman that might unmask the fake “whistleblower” by asserting erroneously that the unidentified undercover informant “has a statutory right to anonymity.”

Schiff neglected, of course, to cite the specific statute because it does not exist. The Intelligence Community Whistleblower Protection Act (ICWPA) makes no mention of anonymity. There is a narrow provision that grants the inspector general the discretion to disclose the name or not, but it applies to no one else, including Congress. There is no right, guarantee or privilege to anonymity anywhere in any statute.

During the hearing, Schiff adopted House Speaker Nancy Pelosi’s recent pivot from the term “quid pro quo” to “bribery,” after Democrats reportedly found through a focus group that it was a more compelling label for Americans to digest.

But the chairman unwittingly destroyed the bribery argument when he confessed that “bribery does involve a quid pro quo.” But wait. If the Ukrainians had no knowledge of the “quid pro quo,” there can be no bribery. This obvious point seemed lost on Schiff, a former prosecutor.

Members of the unelected bureaucracy in our nation’s diplomatic corps are entitled to their moral, ethical and policy differences. But they are not allowed to substitute their own judgments for those of the president and seek to undermine his authority on foreign policy.

A president should only be removed based on an impeachable offense supported by facts, not opinions. Why? Because, as the Athenian philosopher Plato recognized: “Opinion is the medium between knowledge and ignorance.”