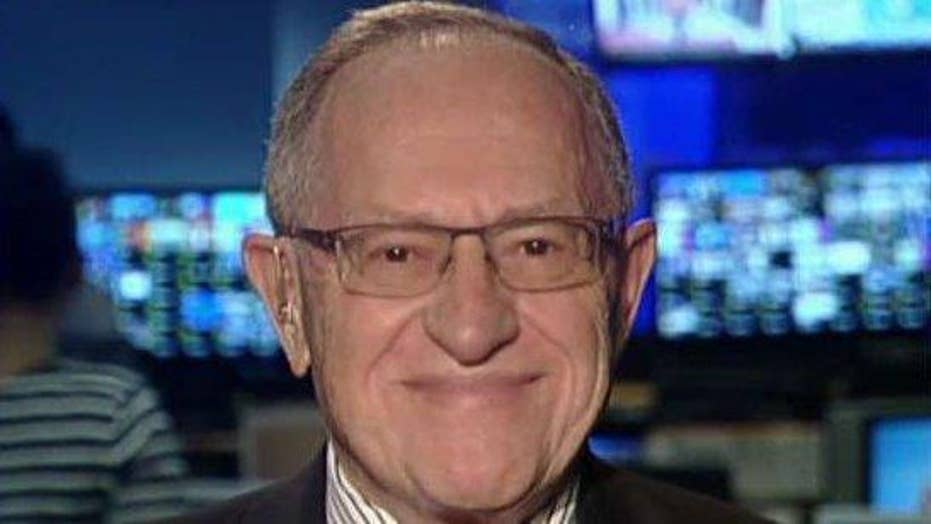 Some Dems think the appointment of a special counsel in the Russia probe is a step toward's Trump's impeachment. But legal expert Alan Dershowitz wonders what's the basis for special counsel and believes it will vindicate the president #Tucker

At a moment in history when the ACLU is quickly becoming a partisan left wing advocacy group that cares more about getting President Trump than protecting due process (see my recent op-ed in the Wall Street Journal,) who is standing up for civil liberties?

The short answer is no one. Not the Democrats, who see an opportunity to reap partisan benefit from the appointment of a special counsel to investigate any ties between the Trump campaign / administration and Russia. Not Republican elected officials who view the appointment as giving them cover. Certainly not the media who are reveling in 24/7 “bombshells.” Not even the White House, which is too busy denying everything to focus on “legal technicalities” that may sound like “guilty man arguments.” Legal technicalities are of course the difference between the rule of law and the iron fist of tyranny. Civil liberties protect us all. As H.L. Mencken used to say: “The trouble about fighting for human freedom is that you have to spend much of your life defending sons of bitches: for oppressive laws are always aimed at them originally, and oppression must be stopped in the beginning if it is to be stopped at all.” History demonstrates that the first casualty of hyper-partisan politics is often civil liberties.

Consider the appointment of the special counsel to investigate “any links and/or coordination between the Russian government and individuals associated with the campaign of President Donald Trump.” Even if there were such direct links that would not constitute a crime under current federal law. Maybe it should, but prosecutors have no right to investigate matters that should be criminal but are not.

This investigation will be conducted in secret behind closed doors; witnesses will be denied the right to have counsel present during grand jury questioning; they will have no right to offer exculpatory testimony or evidence to the grand jury; inculpatory hearsay evidence will be presented and considered by the grand jury; there will be no presumption of innocence; no requirement of proof beyond a reasonable doubt, only proof sufficient to establish the minimal standard of probable cause. The prosecutor alone will tell the jury what the law is and why they should indict; and the grand jury will do his bidding. As lawyers quip: they will indict a ham sandwich if the prosecutor tells them to. This sounds more like Star Chamber injustice than American justice.

And there is nothing in the constitution that mandates such a kangaroo proceeding. All the Fifth Amendment says is: “no person shall be held to answer for a capital, or otherwise infamous crime, unless on a presentment or indictment of a Grand Jury.” The denials of due process come from prosecutorially advocated legislative actions. The founding fathers would be turning over in their graves if they saw what they intended as a shield to protect defendants, turned into a rusty sword designed to place the heavy thumb of the law on the prosecution side of the scale.

Advocates of the current grand jury system correctly point out that a grand jury indictment is not a conviction. The defendant has the right to a fair jury trial, with all the safeguards provided in the constitution. But this ignores the real impact of an indictment on the defendant. Based on a one sided indictment alone, the “ham sandwich” can be fired from his or her job or suspended from university. Consider what happened to the Arthur Andersen company and its thousands of employees when it was indicted for obstructing an official proceeding by destroying records relating to one of its clients. Although Andersen was ultimately vindicated, the indictment itself forced it into bankruptcy causing a loss of thousands of jobs and millions of dollars in shareholder values. Many individual have been indicted on the basis of one sided grand jury prosecutions and subsequently acquitted after a fair trial. Many of these individuals also suffered grievously as the result of being unfairly indicted.

Consider the consequences of an indictment by the special counsel’s grand jury in this matter. Not a conviction – just an indictment handed down by a grand jury that heard only one side in secret. It depends, of course on who the indictment named. In the Nixon case, for example, the president was named as an unindicted coconspirator by the Watergate grand jury. This meant that he could not even defend himself at a trial. I was on the national board of the ACLU at the time. And although I despised Nixon and campaigned for his opponent, I wanted the ACLU to object to the unfairness of a one sided grand jury naming him as an unindicted co conspirator.

So I will be standing up for civil liberties during the duration of this investigation. As a civil libertarian I care more about due process and the rule of law than I do about politics. But many people conflate my advocacy for civil liberties with support for President Trump. I have been bombarded with tweets such as: “Alan loves Donald. He’s throwing him lifelines;” “Has he been hired by Trump? Time to come clean;” “@AlanDersh I thought you were a smart guy. After hearing you support Trumpie, guess not;” “Has Trump already hired @AlanDersh to defend him? Clearly sounds that way;” and “No matter the subject, he inserts himself in the conversation with a full-throated and nonsensical defense of Trump.”

Let me be clear: I voted for Hillary Clinton and oppose many of President Trump’s policies. I would be taking the same position if the shoe were on the other foot – if Hillary Clinton had been elected and she were being subjected to an unfair process. Indeed I did do precisely that when she was threatened with prosecution.

Remember the chants of “lock her up” during the campaign? I will continue to monitor the current investigations into President Trump and his associated for any violation of civil liberties. I will call them as I see them, without regard to which side benefits.