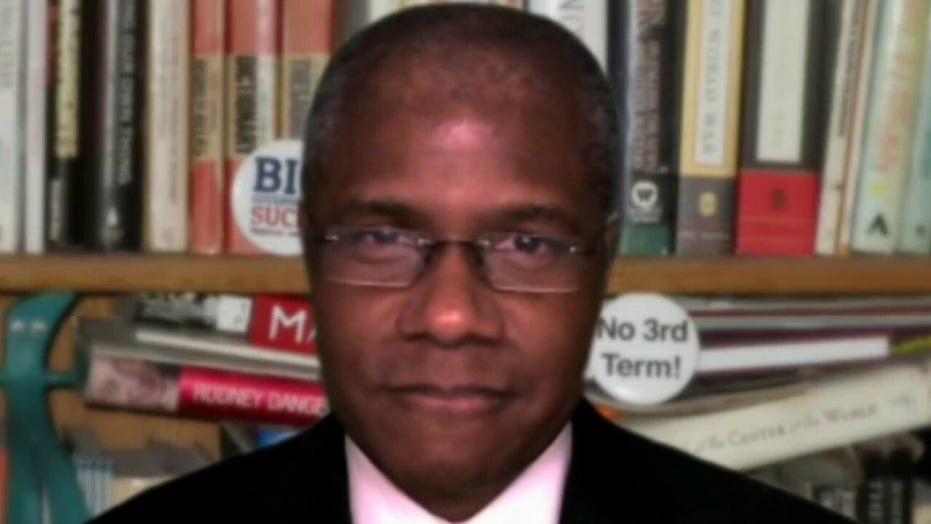 Former Defense Secretary James Mattis boasts some 7,000 books in his library. This makes the unbearable lightness of his public attack on President Trump that much more mysterious. Had Mattis done some reading first, he might not have penned his vacuous anti-Trump broadside in The Atlantic.

“I have watched this week’s unfolding events, angry and appalled,” Mattis wrote Wednesday. He aligned himself with the thousands of Americans protesting the atrocious killing of George Floyd at the knee of fired Minneapolis cop Derek Chauvin and three sacked colleagues May 25.

All four have been arrested and charged for causing or allowing Floyd’s appalling death as Chauvin knelt on the neck of the handcuffed black man who was pinned and helpless on the ground, threating nobody. The other three officers did nothing to stop Chauvin from killing Floyd, as Floyd cried out desperately, "I can't breathe."

TRUMP TOUTS LETTER FROM EX-ATTORNEY DOWD ATTACKING MATTIS: 'YOU NEED TO BONE UP ON YOUR HOMEWORK'

According to Mattis, people demonstrating to protest the killing of Floyd share “a wholesome and unifying demand,” specifically, “Equal Justice Under Law.” These words, chiseled above the entrance to the United States Supreme Court, are central to the American creed.

And then Mattis marched into a ditch.

He wrote: “We must not be distracted by a small number of lawbreakers.”

That’s just what I thought as riot-fueled smoke filled my Manhattan apartment last Saturday night. “Don’t cough too hard,” I told myself. “And don’t be distracted by a small number of lawbreakers.”

Mattis’ words are almost touchingly naïve, as if the cause of justice for Floyd has been tarnished by a stolen police car hubcap here or a toppled trash can there.

Mattis may be right. Let’s stay cool and not be distracted by such lawbreaking as:

The defacement of the Lincoln Memorial (honoring the president who crushed slavery), the defilement of the anti-fascist World War II Memorial, and the desecration of New York City’s St. Patrick’s Cathedral, Los Angeles’ Congregation Beth Israel Synagogue, and other houses of worship.

The bricks, stones, and other projectiles that rioters have hurled into storefront windows and the skulls and faces of police officers. Palettes of bricks and boxes of rocks mysteriously have materialized along protest march routes. They have taken flight and damaged objects and people.

The widespread looting of retail establishments, from Target to Macy’s to Rolex. Some of these attacks are organized crimes, with choreographed mobs tearing down plywood, smashing the underlying windows, and then prying open metal security gates before slithering in to clean house. In Philadelphia, domestic terrorists have used dynamite to blast ATMs open and swipe the cash inside.

The arson that has turned buildings into ashes and piles of rubble, including minority-owned businesses. Minneapolis rioters incinerated a 190-unit low-income-housing complex, under construction. Rioters in Washington, D.C., ignited St. John’s Episcopal Church, where every president since James Madison has worshipped. Luckily, it was damaged, but not torched.

The plight of Minneapolis’ Third Precinct, which barbarians breached, occupied, and cremated, as police officers ran away. This signaled every criminal that civilization had surrendered, and it was open season on society. America still is paying the high price for this calamitous capitulation.

The scores of police officers who have been targeted from coast to coast. Thursday morning, the Drug Enforcement Administration warned law enforcement officers to inspect their vehicles for sabotage after a Brooklyn cop found that the lug nuts on his personal car’s tires had been loosened. Hours earlier, two NYPD officers were shot, and a third was stabbed in the neck. They are among roughly 350 law enforcement personnel wounded in the disorder so far. And retired St. Louis Police Capt. David Dorn, 77 – whose black life mattered as much as George Floyd’s – was shot fatally in the head while shielding a friend’s pawn shop.

This preying Matiss then tried to chew Trump’s head off via this unfiltered slander: “Donald Trump is the first president in my lifetime who does not try to unite the American people – does not even pretend to try,” Mattis fumed. “Instead he tries to divide us. We are witnessing the consequences of three years of this deliberate effort.”

This total lie ignores the president’s ongoing efforts at national unity, most overlooked by the Trump-hating media, so that they can claim he never tries to unite the country.

But Mattis cannot blame media malpractice for his refusal to acknowledge Trump’s unifying remarks in his first State of the Union address in January 2018.

Mattis was in the front row, with the rest of the Cabinet, when President Trump said: “Tonight, I want to talk about what kind of future we are going to have, and what kind of nation we are going to be. All of us, together, as one team, one people, and one American family.” Trump added: “Americans love their country. And they deserve a government that shows them the same love and loyalty in return.”

In his first month in office, President Trump welcomed some three dozen presidents of Historically Black Colleges and Universities to the Oval Office. He energetically has championed these schools, provided them a steady stream of federal funds, and found them corporate partners for student apprenticeships.

Trump signed the First Step Act, making criminal justice reform a reality and reducing mass incarceration of non-violent offenders, something for which Black Lives Matter militated, and which the eight-year Obama-Biden administration failed to deliver.

The president has championed Israel, signed measures to fight anti-Semitism, and emceed two Hanukkah receptions at the White House last December. He also has hosted Iftar dinners with Muslim employees and diplomats to celebrate the end of Ramadan.

Before COVID-19 torpedoed the economy, Trump trumpeted the record-high black and Hispanic employment that his pro-growth policies helped create.

“The memory of George Floyd is being dishonored by rioters, looters and anarchists,” Trump said in Cape Canaveral, Fla., on Saturday, in a soothing, unifying speech. “Healing, not hatred; justice, not chaos are the mission at hand…. Right now, America needs creation, not destruction; cooperation, not contempt; security, not anarchy.”

These comments also appear in a deeply moving Trump-Pence 2020 ad. This 3:45 video, produced the same day as Mattis' smearfest, disembowel's his "Trump-does-not-try-to-unite-America" disinformation. This beautiful spot is a must-see for every American.

Mattis then slammed President Trump’s statement that Trump might instruct the military to restore order in Washington after rioters set blazes near the White House, injured at least 60 Secret Service members, and reportedly forced the commander-in-chief into a secure bunker.

“At home, we should use our military only when requested to do so, on very rare occasions, by state governors,” (versus federal governors?) Mattis scolded.

Mattis should condemn the 12 previous presidents, from Thomas Jefferson to George H.W. Bush, who have invoked the Insurrection Act of 1807 on 19 separate occasions to quell unrest.

Without consulting governors, Republican Ulysses S. Grant used this law in 1872, to dispatch soldiers to South Carolina to stymie the Ku Klux Klan. Democratic deity John F. Kennedy cited this statute to stop instability in Mississippi in 1962. Democratic hero Lyndon Johnson mobilized troops under this authority in 1968. Why? To suppress riots in Washington, D.C.!

For a reputedly well-read man, James Mattis has humiliated himself by not doing a few minutes of research before composing his flimsy, nasty screed against an embattled commander-in-chief who needs such petty sniping as much as another trip to the White House bunker.