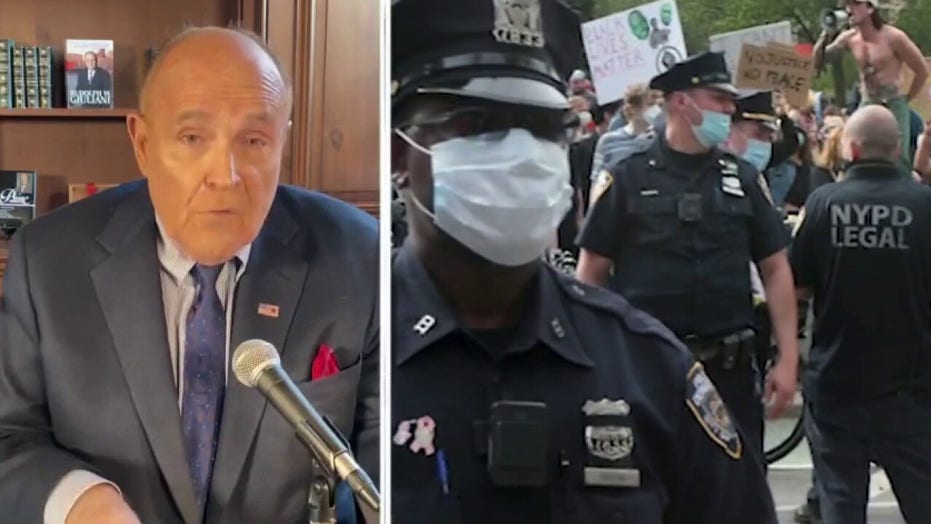 “Defund the Police” is a ridiculous movement, so say 64 percent of Americans. Yet, it is scary that a good third of our population, led by the more radical wing of the Democratic Party (including Reps. Alexandria Ocasio-Cortez, D-N.Y., and Rep. Ilhan Omar, D-Minn.), thinks it is a palatable goal.

Democratic leadership, terrified that this lunacy could alienate the suburban moms they are counting on this November, have defensively postured that it’s really not a call to end police funding, but merely one to transfer a good chunk of our street protection funds over to noble social programs that will presumably eradicate crime and lift the destitute out of poverty.

But wait a minute. Haven’t we tried this all before? It was called the War on Poverty.

Liberals in the 1960s and ’70s attacked law enforcement and allowed criminals to control our streets and prey on innocent residents and shop owners. The $22 trillion “invested“ in social programs would not only lift the poor out of poverty, they predicted, but it would eliminate the very need for police.

How did that work out?

The era between 1969 and1980 was among the most crime-ridden of any in U.S. history. Meanwhile, the economy suffered due to massive inflation and limited opportunity.

Program after expensive program was tried, and failed. The poverty rate at the end of the experiment was almost as high as it was when the well-meaning feel-good programs were initiated. Yet crime skyrocketed, leading to a flight of the taxpaying middle class to the safer suburbs. Why would we want to repeat that fiasco?

Billions invested in pre-k programs were supposed to give low-income, especially minority, children an opportunity to close the education gap between whites and blacks. Yet, a study by research psychologist David Elkind showed that by the third grade, any potential gains garnered from the program washed out.

The $1.2 billion invested in the federal 21st Century Community Learning (After School) Program in the 1990s “didn’t affect student outcomes,” according to the Brookings Institute.

A McKinsey Institute study concedes that despite $300 billion spent annually by the feds on job training, these programs “don’t work.“

It added, “Most training and workforce programs don’t achieve what they set out to. The World Bank estimates that only 30 percent of youth employment programs are successful — and many of those have limited positive effect.”

Data shows that it’s a job and a strong economy – the type we experienced in the last few years prior to the pandemic – that does more to lift poor minorities out of poverty than does any government program.

More recently, New York City’s socialist mayor, Bill de Blasio, wasted somewhere around a billion dollars on contracted mental health programs run by his wife, with analysts still trying to figure out what the nonprofit program was doing, let alone what it achieved. Meanwhile, his $700 million Renewal school program was shuttered due to unsuccessful outcomes.

Over the past 30 years, states have increased spending on education by 375 percent in an effort to raise test scores and mitigate disparate racial outcomes. Yet, test scores remained relatively flat.

So what does work?

Data shows that it’s a job and a strong economy – the type we experienced in the last few years prior to the pandemic – that does more to lift poor minorities out of poverty than does any government program. By 2019, there were 1.4 million fewer poor people than in 2017.

Peter Cove, the author of "Poor No More," was a one-time liberal social worker and adviser to President Bill Clinton. Over time, Cove realized that massive spending on social programs was succeeding only in making the poor more dependent on government.

The prelude to Cove’s book says, “In the 1960s, America set out to end poverty. Policymakers put forth an unprecedented package of legislation, funding poverty programs and empowering the poor through ineffectual employment-related education and training. However, these handouts produced little change, and efforts to provide education and job-training proved inconsequential, boasting only a 2.8 percent decrease in the poverty rate since 1965. Decades after the War on Poverty began, many of its programs failed. Only one thing really worked to help end poverty – and that was work...”

Clinton’s workfare reforms did far more to reduce poverty than did placing people on government assistance. By 2001, the average monthly number of TANF recipients was 56 percent lower than the AFDC caseload in 1996.

The proportion of black children under 18 living in poverty decreases from 45 percent for mother-only households to just 12 percent for married-couple households.

Out of wedlock births in the African-American community hover near 70 percent. Changing laws that incentivize parents living apart would be a far more effective policy than yet more well-meaning social programs.

But after cops started pulling back in 2015 due to public pressure following the Michael Brown killing in Ferguson Mo., by the next year, homicide rates in cities with populations of 1 million or more people increased by 20 percent.

The victims were predominantly African-Americans.

The economic expansion for all races in New York City correlated to the dramatic reduction in violent crime ushered in by the Mayor Rudy Guiliani administration. A reduction in crime correlates to increases in consumer confidence.

As the saying goes: Those who ignore history are bound to repeat it. The call to shift money from cops on the street to nebulous well-meaning programs failed in the past. Hopefully, the wiser elders among us can warn the more idealistic younger generation about the horrific consequences to economic growth and public safety that comes from the “Defund the Police” policies that were tried – and failed – before.