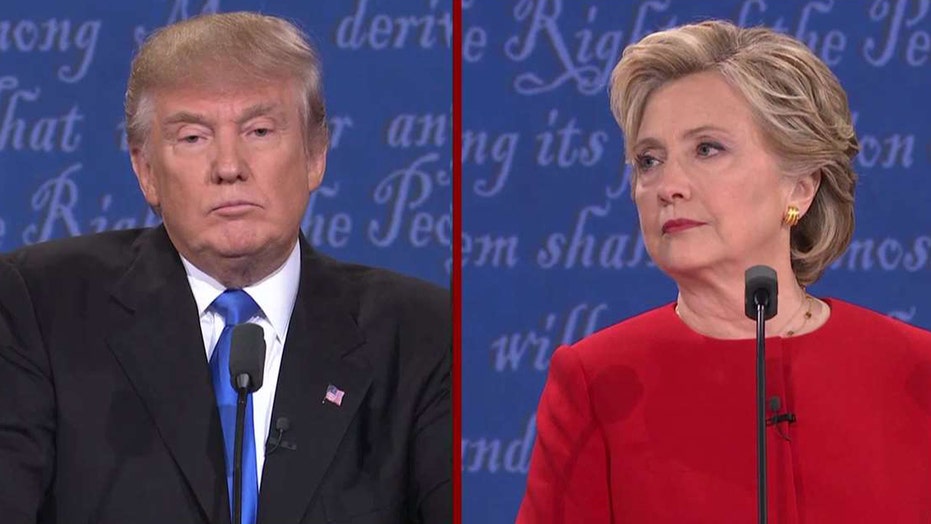 Monday’s presidential debate between Hillary Clinton and Donald Trump coincided with the anniversary of the famous Nixon-Kennedy debate – the first major-party debate to be shown nationwide on television.

Here’s what’s striking about what transpired 56 years ago in Chicago: the stage design was low-frills; JFK looked tan and rested; a pallid Richard Nixon showed the aftereffects of a knee infection.

Lest we add talk of subterfuge to an election already fraught with conspiracies, here are five takeaways from what transpired in the first presidential debate of 2016.

Trump’s Performance. From the beginning, it was clear that Trump got the memo that this wasn’t the same as one of his high-octane pep rallies (the subdued audience was his first tipoff).

It was a far toned-down version from the Trump who stole the spotlight in the Republican primary debates. There was no mention of “Crooked Hillary.”

Trump kept his powder dry as Clinton tried to touch a nerve by speculating that he might be shielding his tax returns because he’s not as rich or charitable as he claims.

When it came time to return fire, Trump went after Clinton’s record (primarily, inconsistencies with stances she took back in the 1990’s). But he didn’t take the extra step, as he has so any times before in this election, by making it personal. An example: as Clinton was mocking his fortune, he didn’t call her out for her and her husband’s shortcuts to wealth.

At the debate’s end, when Clinton ripped Trump for his treatment of women, he didn’t utter a word about her husband. Though he did infer he was thinking of going there, but chose not to: “It’s inappropriate. It’s not nice.”

By the time the third debate rolls around, he might decide that enough is enough.

Clinton’s Performance. Madame Secretary’s approach was two-pronged: keep smiling while she kept trying to get under Trump’s skin.

She did smile a lot. And she rarely missed a chance to stick a shiv into her opponent – in a personal way.

Clinton sniped at Trump for taking money to start his business, alluded to his “crazy” ideas, suggested his tax cuts would benefit his family and recited a list of terrible comments he’s made with regard to the opposite sex.

Clinton came loaded with facts and figures on the economy and crime. But she also overdid it on the pandering front – the worst moment being a passage in which she defended America’s first black president, all but branded Trump a racist landlord, and then circled back to the glorious oratory of Michelle Obama at her party’s convention.

At least she didn’t break out into “We Shall Overcome.”

Lester Holt’s Performance.  On the day before the debate, Politico put out this story detailing the extent of recent Trump exaggerations and half-truths.

Clinton supporters called it boffo journalism; Trump supporters claimed it was meant to put undue pressure on the moderator to hound Trump.

Holt challenged Trump on “frisk and search” and whether he opposed the U.S. invasion of Iraq. Not so much did he stop Clinton and correct her statements.

That won’t go overlooked by media-bashers.

Now, some criticism about Holt’s choices.

Given 90 minutes to ask Clinton and Trump why they’re the most unpopular presidential candidates in 30 years, Holt didn’t go there. He did push Trump on “birtherism”; he didn’t push Clinton on the skeletons in her closet.

Holt gave the two candidates a long leash – at times, too long, allowing for too much cross-talk and talking past each other.

Hopefully, we’ll get a little more insight into the candidates’ souls during their next two encounters.

The Next 72 Hours and Beyond. The airwaves will crackle over the next 24 hours with talk of debate winners and losers.

You’re better off donning a pair of ear buds and drowning out the noise.

Here’s why: it’ll take a couple of days for pollsters to see if the numbers actually moved after tonight.

In 2012, Mitt Romney enjoyed what Gallup called “a historic debate win” after his first encounter with President Obama. A Gallup poll in the two days after that debate found 72 percent of viewers believing Romney did a better job – including 49 percent of Democrats. A five-point Obama lead evaporated.

In 2012, the instant polls from the debate were in line with Gallup’s findings – CNN and CBS News had Romney as the clear winner. Better to wait a few days until the head-to-head numbers are revisited (especially in the battleground states).

And there’s one other factor: how “Saturday Night Live” satirizes things later this week, on its season premiere.

Five days after the first Bush-Gore debate in 2000, SNL spoofed Al Gore’s fondness for the word “lockbox” (he said it seven times during the debate). It didn’t seem like a big deal during the debate; Gore never shook off the caricature of a robotic stiff.

Winner? If we must, round one . . . goes to Clinton – my scorecard had her ahead on points, with no knockdowns, so no lasting damage to Trump.

Clinton was more composed on the stage and showed more command of the facts. She didn’t cough (the medical story coming out of Hofstra: a sniffing Trump could have used a Neti Pot).

In all, Clinton was more agile than Trump. However, she did nothing to address the elephant in the room – the public’s lack of confidence in her honesty. She might want to rethink the attack-heavy approach before their next meeting.

Trump struggled on two matters: birtherism and his tax returns. He kept his focus on a failed political system and effectively tagged Clinton on trade and political convenience – all the while reminding voters that Clinton’s been a political presence for three decades now.

However, Trump did little to assuage concerns that he’s not temperamentally suited for the job.

Much like another great conflict waged a century ago, both sides will claim they gained ground– only to retreat to their trenches.

To be continued in St. Louis.