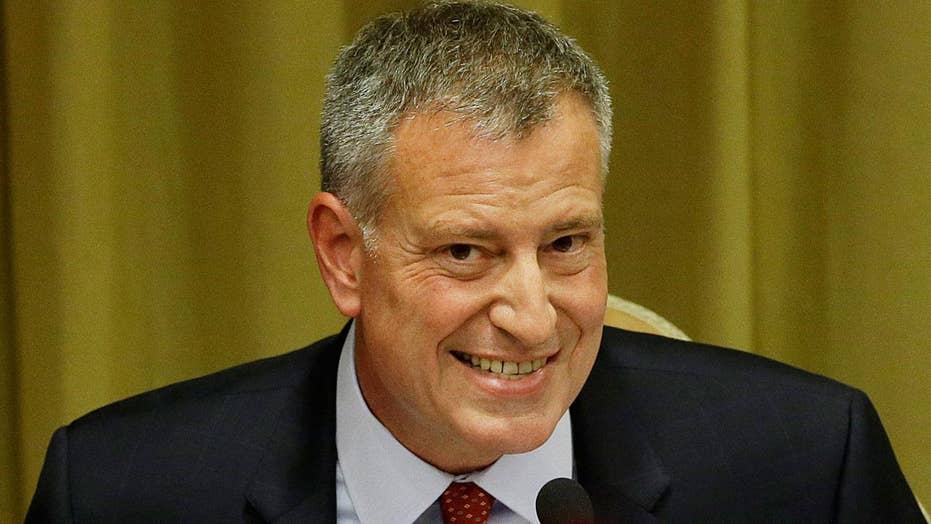 Reaction to De Blasio on 'The Five'

On Thursday, July 5, New York City Mayor Bill de Blasio, with no advance notice to the public he serves, jetted off to Hamburg, Germany, to attend the G-20 Summit, where heads of state and leaders or representatives from worldwide organizations and entities meet to discuss global imperatives. The mayor is not there to participate in the open dialogue between more than 20 participating countries and scores of international organizations and invited guests. He is to be the keynote speaker for an event called Hamburg Shows Attitude, which is described as a protest really for “democracy and human rights.” He will also squeeze in a visit with his son Dante, a Yale University student doing a summer internship in Berlin.

The mayor’s timing for this trip is inexplicable and shows a complete lack of regard for anyone but himself and the advancement of his progressive ideals. Less than 24 hours earlier, a uniformed NYPD police officer, Miosotis Familia, was brutally assassinated by Alexander Bonds, an ex-convict who was under parole supervision and had been released from a Bronx psychiatric facility just days before committing the murder. Officer Familia, a former Red Cross worker, was a 12-year police veteran, devoted single mother to three children, and the primary caretaker for her own ailing octogenarian mother who was recuperating from cancer surgery.

In yet another act of hubris and hypocrisy, the mayor ignored the swearing-in ceremony of 524 NYPD recruits, even though PO Familia’s murder was still such a fresh wound on the city’s collective psyche. If ever the young, eager, enthusiastic and idealistic recruits, who hailed from every corner of the globe, needed words of reassurance or affirmation from their leader, it was then. Instead, the mayor was readying for his trans-Atlantic flight, not to hobnob with world leaders, but to participate in protests with anti-capitalist forces.

What is especially galling about the mayor’s silence related to Officer Familia’s killer is the fact that, just weeks earlier, he lauded the murder indictment of NYPD Sgt. Hugh Barry. Sergeant Barry mortally wounded Deborah Danner, an emotionally disturbed woman who attacked him with a baseball bat. Ms. Danner had been rotated through the revolving door of de Blasio’s pitiable mental health system on many occasions, but always returned home to wreak havoc in her building.

Alexander Bonds was also a participant in that system, where the only standard of measure seems to be the amount of blood spilled and which way the political winds are blowing. One would have thought the mayor would have called for a full-scale investigation of how Bonds was allowed to walk the streets, as fast as he egregiously shrieked that Sgt. Barry made a grave error in judgment shortly after the Danner incident.

Even though 2016 Democratic presidential candidates Hillary Clinton and Bernie Sanders both said ‘thanks but no thanks’ to Mayor de Blasio’s political support, he is still willing to leave a reeling and shell-shocked New York to become a universal spokesperson for progressivism. However, around the time his plane was touching down in the Deutschland, a third train derailment in five months occurred at Penn Station.

The city is in mourning and experiencing a time of great hardship. If it ever needed steadfast leadership, it is now. Instead the mayor opted to fly a continent away – far from the tears and the reverberations of a citizenry gripped by despair and uncertainty. It makes one wonder if feckless and guileless leadership really is leadership at all. In the case of Mayor de Blasio, the answer is a resounding no.

Ed Mullins is the President of the New York City Sergeants Benevolent Association (SBA), whose 13,000 members make it the fifth largest police union in the United States.