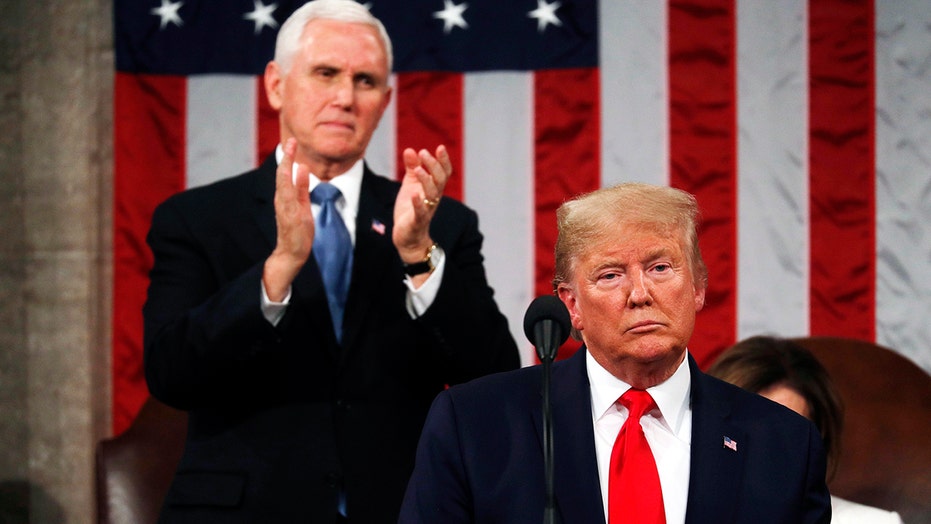 Under the leadership of President Trump, the state of our union is as strong as it has ever been – and the best is yet to come.

The president walked into the well of the U.S. House of Representatives Tuesday night for his third State of the Union address with great purpose and a message of hopeful optimism that America’s best days are still ahead of us. His speech was a showcase for American exceptionalism.

There are countless reasons for Americans to feel optimistic about the future, because we are better off today than we were four years ago. We’re in the midst of the great American comeback – but the Democrats and their allies in the anti-Trump media can’t come to grips with that reality.

TRUMP TAKES ON ‘RADICAL LEFT’ IN DEFIANT AND DRAMATIC STATE OF THE UNION ADDRESS; PELOSI RIPS UP SPEECH

The stark contrast between President Trump’s extraordinarily successful tenure in office and the agenda-less Democratic Party’s utter disarray – from the impeachment circus to the Iowa caucus fiasco – is undeniable.

Trump and the Republicans are thriving, while the entire Democratic establishment is falling apart at the seams. Independent voters are taking note.

After eight years of economic and military atrophy under the Barack Obama-Joe Biden administration, the forgotten men and women of our country needed some good news. The election of Donald Trump provided it.

And now with 36 months in the White House under his belt, President Trump has kept his promises and the United States of America is firing on all cylinders as a result.

The State of the Union was the perfect opportunity for President Trump to once again bypass the dishonest liberal media that simply won’t cover the president objectively. Consider these accomplishments:

Seven million new jobs have been created on President Trump’s watch. National unemployment is at a low point not seen in half a century. African-American, Hispanic, and female unemployment rates are at historic lows. A record number of Americans are employed.

America is producing more energy than any other nation and is no longer reliant upon energy from the Middle East.

President Trump is renegotiating bad trade deals so that we finally have fair-trade agreements prioritizing the American worker instead of our nation-state competitors.

A total of 187 Trump nominees have been confirmed by the Senate to serve on the federal judiciary – including two Supreme Court justices. They will strictly interpret the Constitution and not legislate from the bench.

And while rebuilding our depleted military, President Trump destroyed the ISIS caliphate and eliminated two of the world’s worst terrorist masterminds.

Tuesday night President Trump looked on with great pride as he recognized Americans in the House gallery who represent the backbone of our great nation that remains the envy of the world.

The president knows full well what makes America great: strong families; the men and women in our armed forces; our police and Border Patrol; our teachers; and the other Americans who go to work every day in all sorts of jobs without fanfare to help to create the strongest economy on Earth.

The President also recognized Venezuela’s “legitimate president” Juan Guaido to remind us that “freedom unifies the soul” and that socialism belongs on the ash heap of history.

First lady Melania Trump placing the Presidential Medal of Freedom around the neck of “the Babe Ruth of talk radio” Rush Limbaugh – who disclosed Monday that he’s suffering from advanced lung cancer– was icing on the cake.

With the Democrats’ partisan attempt to remove Trump from office after impeaching him in the House on the verge of being in the rearview mirror with his certain acquittal in the Senate Wednesday, the president looked like a leader who refuses to be sidetracked by the deranged left-wing resistance led by House Speaker Nancy Pelosi, D-Calif., and Senate Minority Leader Chuck Schumer, D-N.Y.

As President Trump said in his address to Congress, there’s simply too much work still to do for the American people.

Despite the completely unreasonable and unethical behavior of Democrats over the past three years, President Trump once again offered them an opportunity to come to the table and work with him on important issues for the American people.

The Democrats would be wise to accept the invitation because the American people are wondering if these Democrats care about anything but wasteful political investigations and divisive impeachment witch hunts.

The president will press to lower prescription drug prices for all Americans – the Democrats should come along.

The president wants more tax relief for the American middle class – the Democrats should participate.

The president wants to finish securing our southern border – the Democrats should help with the effort.

The American people want President Trump to finish the trade deal with China – the Democrats should engage.

The American people want bipartisan legislative action like infrastructure reform to come out of Congress. Pelosi can make it happen if she’s willing to get treatment for the Trump Derangement Syndrome she suffers from.

The president reiterated Tuesday night with great resolve his clarion call that our beloved constitutional republic will never be a socialist country, while making the point that 132 irresponsible Democratic members of Congress have “endorsed legislation to impose a socialist takeover of our health care system, wiping out the private health insurance plans of 180 million Americans.”

Trump is absolutely right and the American people agree. Socialism would completely obliterate our “shining city upon a hill” that President Trump is dedicated to passing on to future generations.

There were many touching moments with terrific stories highlighting American greatness in Trump’s State of the Union address – yet Pelosi ripped up the speech on national television because she can’t compete with the fact that America is back thanks to the leadership of President Trump.

The president made clear that the United States is flourishing because his America First policies are getting the job done. It took the drive of an American business icon who is the ultimate political outsider to make it happen.