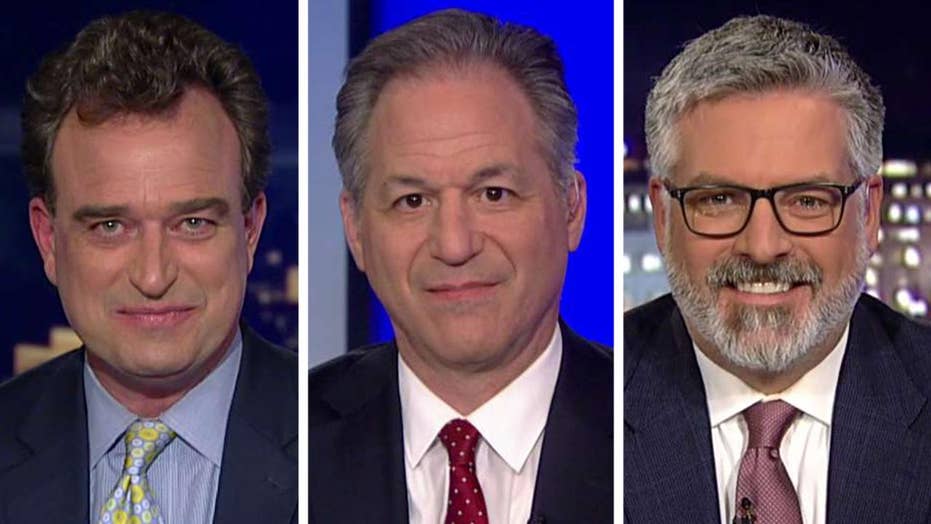 What to expect as impeachment inquiry moves into public phase

The Democrats’ partisan impeachment witch hunt against President Trump – absurdly centered on a routine phone call between him and Ukrainian President Volodymyr Zelensky – will become a televised farce Wednesday with the opening of public hearings by the House Intelligence Committee.

Democrats are following the old adage: “If at first you don’t succeed, try, try again.” They want to find something – anything – to attack President Trump, in hopes of hurting his reelection chances. And they won’t let the facts get in the way of their ceaseless political assault on the president.

As baseball Hall of Famer Yogi Berra famously said, “it’s like déjà vu all over again.”

First the desperate Democrats dragged our country through the Russia investigation hoax, until the investigation by Special Counsel Robert Mueller exposed that as a baseless smear against the duly elected president of the United States.

The Democrats were forced to change their messaging repeatedly due to a lack of evidence, as they sought to build a phony case against Trump and his campaign involving collusion with Russia to win the 2016 election. The mainstream media happily followed along with this nonsense.

Then the Democrats claimed the Trump campaign had engaged in a conspiracy – and the liberal media shouted the fact-free claim from the rooftops.

Then, when these crazy allegations were totally debunked, House Speaker Nancy Pelosi of California and Senate Minority Leader Chuck Schumer of New York and their fellow Trump-hating Democrats doubled down with a laughable claim saying President Trump had engaged in obstruction of justice.

GREGG JARRETT: THE TRUMP IMPEACHMENT INQUIRY IS ALREADY IN BIG TROUBLE. HERE'S WHO DEMOCRATS HAVE TO THANK

The rabidly anti-Trump media mindlessly repeated those partisan talking points as well. But in the end, none of it amounted to a hill of beans. In fact, it was all a lie.

But the Democrats – eager to overturn the results of the 2016 presidential election – won’t give up. So now they’ve replaced the Russia collusion hoax with a new hoax involving the Trump-Zelensky phone call.

First the Democrats claimed there was a quid pro quo in which Trump had acted improperly. Then President Trump released the transcript of the call showing no quid pro quo took place.

This investigation is a runaway train that’s about to go off the rails.

Now moving the goalposts again, unhinged Rep. Eric Swalwell, D-Calif., claims to have evidence of an “extortion scheme” by the president.

Swalwell has absolutely no credibility whatsoever. This is the individual who said President Trump was a Russian agent and claimed on television that there was evidence of Trump-Russia collusion even after the Mueller report said there was none. The media should put an asterisk next to every wild and irresponsible allegation this guy makes.

The bottom line is that with the impeachment hearings set to begin, the Democrats are showing increasing signs of desperation yet again because of their lack of evidence against the president.

After three years of swings and misses, the American people are getting fed up with the impeachment-crazed Democrats.

Thanks to the failure of the mainstream media, facts don’t matter when the objective is to smear President Trump. But when you’re attempting to overturn the will of 63 million voters by removing the person they elected to lead our nation, facts are the only thing that must matter. That’s why the Democrats have a big problem.

Since President Trump brilliantly released the transcript of his call with President Zelensky, Democrats have been hard-pressed to move the ball down the field in their investigation with any bombshells. In fact, the investigation has been tackled by the facts and stopped dead in its tracks – just like the made-up Russia fallacy.

Look no further than former U.S. Ambassador to Ukraine Marie Yovanovitch allegedly lying in her deposition to the Intelligence Committee, which is chaired by Rep.  Adam Schiff, D-Calif.

When asked by Rep. Lee Zeldin, R-N.Y., if she responded to an email from a Democratic committee staff member after the whistleblower complaint was filed, Yovanovitch testified under oath that said she had not. But emails obtained by Fox News suggest otherwise.

If Yovanovitch gave untruthful testimony to Congress, a criminal referral should be sent to the Department of Justice immediately. At the very least, Yovanovitch’s inconsistent testimony puts her credibility in question and her scheduled testimony Friday should be canceled.

The allegations about improper conduct by President Trump during his phone call with President Zelensky were lodged by an anonymous whistleblower who has only secondhand knowledge of what was actually discussed on the call.

Why is Rep. Schiff blocking the whistleblower’s testimony?  The American people must hear from the accuser without delay and have every right to be suspicious about his silence.

If the whistleblower doesn’t testify, it should be assumed that he’s a political actor and his answers would be factually problematic for the hyper-partisan House Democrats. And whatever happened to the second whistleblower who briefly came forward?  Are the Democrats trying to put that genie back in the bottle for some nefarious reason?  It certainly doesn’t look good.

These aren’t the only facts Schiff is hiding from the American people. We still don’t know who was listening in on the call with President Trump and President Zelensky. How is this possible?  Everyone on the call is a potential witness.

Cherry-picking people on the call to testify about hurt feelings or a policy disagreement with President Trump doesn’t tell the entire story. Others on the call might testify nothing out of the ordinary was discussed; and this is probably of primary concern for the deceitful Rep. Schiff.

The American people have a right to know who leaked the contents of the call to the whistleblower. If it’s important to get to the bottom of the leaks in the James Comey and Andrew McCabe FBI cases, why not in this case?

Furthermore, Schiff’s selective release of transcripts and refusal to allow Republicans to call their own witnesses at the impeachment hearings has all the makings of an unfair, politically inspired witch hunt that has already reached the conclusions it wants – regardless of the facts and evidence.

If Schiff thought he had a watertight case, he’d allow testimony about the whistleblower’s activities and motives. What role did Schiff himself play in the complaint being filed?

This investigation is a runaway train that’s about to go off the rails.

When I served as chief investigator for the House Committee on Government Reform and Oversight during the Clinton administration, I learned that it’s next to impossible to meet expectations at a congressional hearing.

Schiff has let expectations spiral out of control. His hearings will make Robert Mueller’s congressional testimony seem riveting. The reality is that everything that comes out this week will be old news due to the Democrats’ addiction to disclosing depositions – first in small doses with selective leaks – for political expediency.

If House Speaker Pelosi were discharging her duties in a responsible manner, now would be the time to tap the brakes and ask Schiff if he has any concrete evidence. The American people don’t support rushing to judgment on something as important as impeaching their president.

It’s time for Schiff to show his cards. The problem is that we know he’s bluffing.