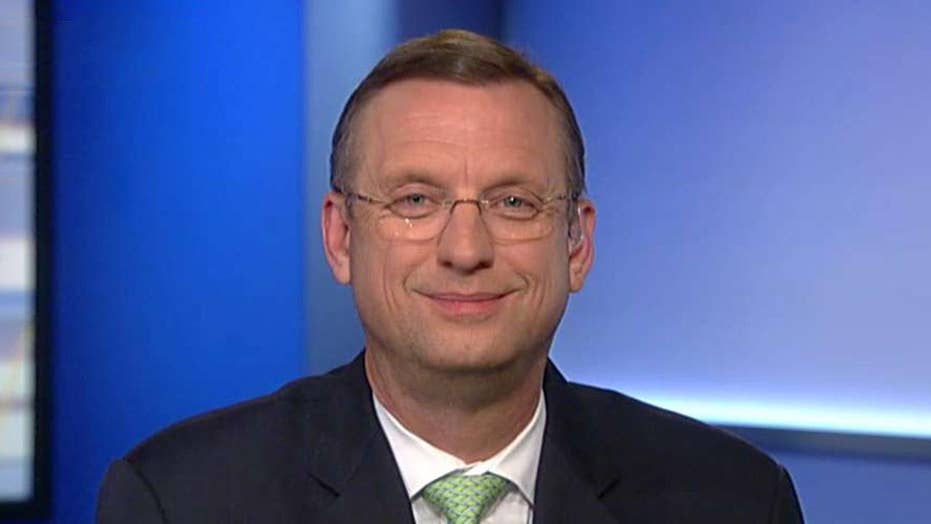 Pelosi, D-Calif., compared her unpopular impeachment hoax Wednesday to Paul Revere’s famous ride in 1775. Senators have now been warned: The radicals are coming!

As Pelosi announced her intention to transmit the two pitifully weak articles of impeachment adopted by the House and appoint managers for the Senate trial of President Trump after a suspicious 28-day delay, you could tell by the looks on the faces of the unhinged House Democrats that their political ruse has run out of runway and things are about to get real.

Curiously, Pelosi appeared to tip her hand when she said that “voters in America should decide who our president is.” This was an odd statement given that it was made at a press conference about impeachment proceedings. Regardless, she’s right. President Trump will crush his Democratic opponent – whoever it is – less than 10 months from now.

Pelosi said of her decision-making process regarding which House Democrats to choose as impeachment managers that her “emphasis is on litigators.”

Actually, House managers Reps. Adam Schiff and Zoe Lofgren of California, Jerrold Nadler and Hakeem Jeffries of New York, Val Demings of Florida, Jason Crow of Colorado, and Sylvia Garcia of Texas have something else in common. They are all extremely partisan actors who know the Democrats can’t beat President Trump in the election in November. So they’re using impeachment as a political weapon in an attempt to weaken him.

As the impeachment-crazed House speaker carried on about the Trump-haters who will prosecute her political smear campaign against the duly elected president of the United States, Pelosi said that “everything is about time.”

Pelosi is correct – her time is up. Thankfully, adults in the Senate now get to take hold of this sham of a process. Senators must hold a fair trial and afford President Trump due process – finally.

The process for President Trump’s impeachment trial will mimic the one that guided the impeachment of President Bill Clinton – a procedure that was approved unanimously by the Senate in 1999.

Democrats will present their scant evidence under the leadership of House Intelligence Committee Chairman Schiff – a person who has only proven one thing to date: he can’t tell the truth.

Senate Majority leader Mitch McConnell, R-Ky., understands that the Democrats are showing signs of desperation as they now beg for more witnesses.

The truth is that Democrats decided to rush the nation into this position despite having the most partisan and weakest articles of impeachment in history. If they wanted to try to build a stronger case, they could have pursued more testimony before voting to impeach the president.

A recent tweet by McConnell said it all: “We’ve reached a simple contradiction. The House case cannot be so robust that it was enough to rush into impeachment, and enough for Senate Democrats to start pre-judging guilt, but also so weak that they need the Senate to go fishing. These two stories cannot both be true.”

The facts will ultimately show that President Trump did nothing that rises to the level of an impeachable offense and will leave senators with only one viable option: a swift acquittal.

Pelosi went on and on trying to explain away her decision to delay the impeachment trial that she and her caucus of radical Democrats once described as an urgent matter of national security.

The House speaker disingenuously claimed her politically calculated delay enabled her political inquisitors to accumulate more evidence against the president, thus admitting that the evidence used to impeach him was horribly lacking at best.

It has become quite clear that Pelosi’s delay was nothing more than an in-kind campaign contribution to former Vice President Joe Biden. By holding the articles of impeachment back from the Senate for nearly a month, Pelosi has succeeded in taking Sens. Bernie Sanders of Vermont, Elizabeth Warren of Massachusetts and Amy Klobuchar of Minnesota off the political battlefield in Iowa on the eve of the nation’s first nominating contest.

With Sanders, Warren and Klobuchar locked in Washington for a Senate impeachment trial, Swampy Joe Biden has the ability to barnstorm Iowa to make his case in person down the stretch before the Feb. 3 caucuses. It’s quite possible the trial could drag on past Iowa and also impact the New Hampshire primary Feb. 11.

One thing’s for sure: Pelosi and scores of other establishment Democrats have no interest in Bernie Sanders becoming the Democratic Party’s nominee for president.  It appears that the drive to stick it to the socialist from Vermont is in full swing once again.

Sanders supporters still haven’t forgotten how Democrats rigged their nominating process against him in favor of Hillary Clinton in 2016.

Thankfully, this impeachment nightmare will be over in a matter of weeks. Democrats will then have to face the reality of getting behind an extraordinarily flawed nominee for president who supports raising job-killing taxes, an open-borders immigration policy, and some version of a “Medicare-for-all” farce that will bankrupt our nation and throw upward of 150 million people off their private health insurance plans.

At Pelosi’s last stand Wednesday, she boasted that her fraudulent witch hunt is “an impeachment that will last forever.”

What Pelosi doesn’t understand is that this impeachment will live in infamy forever and pave the way for a landslide reelection for President Trump in November. In a brilliant twist, that historic event ought to lead to Pelosi’s disgraceful exit from politics once and for all. And it will be long overdue.