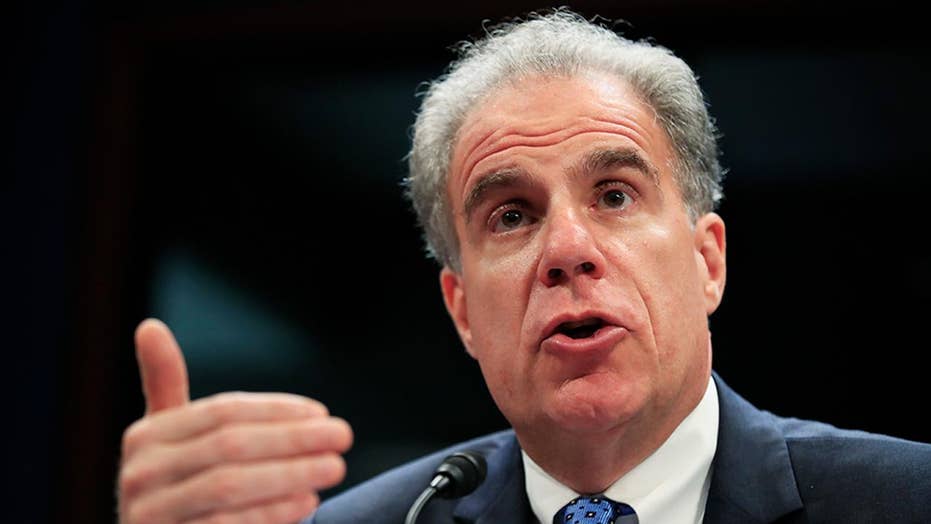 Hannity on the IG report&nbsp;

Sean Hannity and his guests unpack the extensive FBI failures described in Inspector General Michael Horowitz’s report on the launch of the Trump-Russia collusion probe.

As former Special Counsel Robert Mueller found in his report after almost two years of investigation, there was no collusion between the Trump campaign and Russia to help Trump be elected president. Yet Democrats cling to this absurd myth, just as they now cling to the baseless new myth of Trump misconduct regarding Ukraine.

The blockbuster inspector general’s report, which was issued Monday, concluded that there were “numerous serious factual errors and omissions” and “serious performance failures” by the FBI under President Barack Obama’s administration regarding applications to the FISA (Foreign Intelligence Surveillance Act) Court. These applications were used to improperly spy on Trump campaign foreign policy adviser Carter Page.

CARTER PAGE: I HAVE A 'TEAM OF ATTORNEYS' SCOURING HOROWITZ REPORT FOR POTENTIAL LAWSUITS

In fact, Horowitz found “at least 17 significant errors or omissions in the Carter Page FISA applications.” To make matters worse, the Horowitz report stated plainly that the inspector general’s office “did not receive satisfactory explanations” for the apparent meltdown in judgment that occurred at the FBI.

The report also states that senior Justice Department official Bruce Ohr “committed consequential errors in judgement” for his rogue activities regarding the politically motivated Steele dossier – a pack of lies assembled by former British spy Christopher Steele, who was known to be hostile to Trump.

This begs the question: Why is Ohr still on the government’s payroll? If the Justice Department can’t fire Bruce Ohr, why should the American people trust that anyone is being held accountable for the Russia collusion hoax? The hoax has cost taxpayers millions of wasted dollars and is nothing but a witch hunt launched by Trump opponents.

If the Justice Department was retaining Ohr simply to ensure his cooperation with Horowitz, that is no longer an issue. The Horowitz investigation is now over.

While the Ohr situation is frustrating, it pales in comparison to what is going on in the case of former Deputy FBI Director and CNN contributor Andrew McCabe.

News organizations reported in September that federal prosecutors are recommending McCabe be indicted for his alleged false statements to Inspector General Horowitz’s investigative team in 2017. It’s said that the wheels of justice turn slowly – but this is ridiculous.

The Horowitz report includes a truckload of troubling findings about how the FISA applications to spy on Page were obtained. These must not be overlooked.

The Senate Judiciary Committee will hold a hearing Wednesday when it should drill down and ask questions about the Horowitz report’s findings.

For example, the Horowitz report says “the application, as well as the renewal applications, did not include significant relevant information, and contained inaccurate and incomplete information, that was known to the Crossfire Hurricane team at the time but that it did not share with NSD (Justice Department National Security Division) attorneys.”  Crossfire Hurricane was the code name for the operation to spy on Page and the Trump campaign.

The American people want to know what drove the FBI to cut corners when it was dangerous and irresponsible to do so.

President Trump’s takeaways from the Horowitz report are correct. The president boldly stated after the report was issued that the FBI “fabricated evidence and they lied to the courts and they did all sorts of things to have it go their way and this was something that we can never allow to happen again.”

The Senate Judiciary Committee will hold a hearing Wednesday when it should drill down and ask questions about the Horowitz report’s findings.

The inspector general’s investigation was announced way back in March 2018. The investigation dragged on much longer than anticipated and the review and classification process were marked by delays and then more delays.

This inspector general’s investigation was the first of its kind – a probe that centered on allegations of U.S. government spying on one of our own presidential campaigns – and had none of the mundane attributes of the usual run-of-the-mill inspector general probes.

The report’s release was immediately met by a shocking statement from United States Attorney John Durham. Durham announced that his office told Inspector General Horowitz that he and his investigators “do not agree with some of the report’s conclusions as to predication and how the FBI case was opened.”

That was a rare statement of rebuttal from the prosecutor running the criminal investigation into the origins of the FBI’s investigation of the Trump presidential campaign’s alleged contacts with Russia. It is sure to fuel speculation that the Durham investigation has moved far beyond the limited jurisdiction of Horowitz.

Generally speaking, inspectors general cannot probe witnesses or evidence outside the walls of their departments. U.S. Attorney Durham, on the other hand, can subpoena or seek to interview almost anyone he pleases, both inside and outside the United States.

Durham has the power to compel witnesses to testify and provide documents using a grand jury, making his statutory power dwarf that of an inspector general.

The Horowitz report, for instance, while extremely thorough in its own right – coming in at over 400 pages – makes clear that the inspector general’s office did not interview key figures such as Fusion GPS founder Glenn Simpson and former senior State Department official Jonathan Winer.

Due to jurisdictional restrictions, it can be assumed that Horowitz was unable to interview other central figures in the disgraceful domestic spy saga, such as former CIA Director John Brennan and former Director of National Intelligence James Clapper.

Additionally, the public is still waiting to learn if any representatives from the Hillary Clinton campaign or the Democratic National Committee were interviewed about whether they knew of internal Justice Department or FBI activities regarding the procurement of FISA warrants during the 2016 campaign.

Those answers could shed light on just how politicized the situation might have truly become. After all, the Clinton campaign and Democratic National Committee were behind the funding of Steele’s debunked Russian dossier.

It would be devastating if Clinton associates once again received favorable treatment just as they did during the botched private email server investigation of 2015 and 2016.

Furthermore, the American people deserve to know if the Obama White House had any involvement with the decision to move forward with the October 2016 FISA application to spy on Carter Page.

You would think that an official act as extraordinary as investigating or surveilling the rival presidential campaign would have to get signed off on at the very top. Will we ever find out for sure?

To his credit, Inspector General Horowitz “examined more than one million documents … and conducted over 170 interviews” according to his report. The findings were jaw-dropping and must be thoroughly digested.

Attorney General William Barr noted that the “Inspector General’s report now makes clear that the FBI launched an intrusive investigation of a U.S. presidential campaign on the thinnest of suspicions that, in my view, were insufficient to justify the steps taken.”

The United States government must never allow this to happen again. Will those responsible be held accountable? Will Congress step up and have a serious debate about reforming our FISA laws? Time will tell.

After a whirlwind news day, the remarkable words from Durham were perhaps the most consequential revelation of all. This leaves absolutely no doubt about who will get the final say on exactly what happened at the highest levels of the Obama administration when it opened investigations of the Trump campaign during the unforgettable summer of 2016.