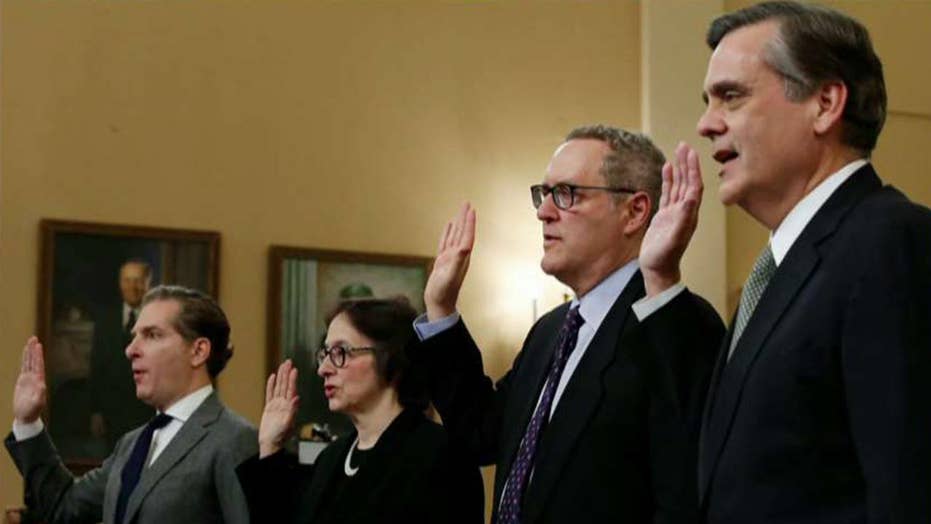 What was billed as a scholarly examination of the constitutional merits of impeachment, devolved into partisan bickering; chief congressional correspondent Mike Emanuel reports from Capitol Hill.

House Judiciary Committee Chairman Jerrold Nadler opened Wednesday’s impeachment hearing with testimony from three left-wing law professors who consider President Trump to be evil incarnate. If Nadler thought this display would somehow convince the public that the president’s actions merit impeachment, he is sure to be disappointed.

The three professors simply failed to make the case.

Nadler’s witnesses were Noah Feldman of Harvard University, Michael Gerhardt of the University of North Carolina, and Pamela Karlan of Stanford University.

The key question was: What type of presidential misconduct justifies impeachment?

In drafting the Constitution, America’s founders did not provide for impeachment as a partisan political weapon or as a response by Congress to a president who lawmakers dislike or whose policies they consider misguided.

Rather, the founders viewed impeachment solely as a remedy for misconduct so serious that it renders the president unfit to remain in office for another day. Otherwise, lawmakers could wait for the next election and let voters decide who should occupy the Oval Office.

Professor Karlan is a campaign contributor to Sen. Elizabeth Warren, D-Mass., who is seeking the Democratic presidential nomination to run against Trump. In addition, Karlan was a political appointee of President Barack Obama in the Civil Rights Division of the U.S. Justice Department.

I encountered Karlan several years ago when she published a law review article making patently false claims about the supposed lack of enforcement of the Voting Rights Act by the Bush administration. She started talking about impeaching Trump over his business ties in 2016 –before he even took the oath of office.

In her testimony Wednesday, Karlan claimed that Trump should be impeached because the “evidence reveals” that he abused the “powers of his office to demand that a foreign government participate in undermining a competing candidate for the presidency.”

The problem with that claim – as Professor Turley observed – is that the evidence does not show that at all.

Turley, a self-professed liberal who told the committee he voted against Trump in 2016, pointed out that the House is moving toward impeachment on a “record composed of a relatively small number of witnesses with largely second-hand knowledge.”

Moreover, the “only three direct conversations with President Trump do not contain a statement of a quid pro quo, and two expressly deny such a precondition,” Turley said.

In other words, Karlan’s claim that the president demanded that a foreign government interfere in our 2020 presidential election is not supported by the evidence. While much for her testimony consisted of grandiose statements about the importance of the right to vote and the dangers of “foreign interference,” she failed to prove that impeachment is warranted.

Professor Feldman is a columnist for Bloomberg News, which is owned by Democratic presidential candidate and former New York City Mayor Michael Bloomberg.

As Turley said, the evidence did not show this.

In fact, the military aid that was the supposed source of the non-existent quid pro quo was released after “a delay that the witness described as ‘not uncommon’ for this or prior administrations,” Turley said.

Professor Gerhardt has been deeply involved in Democratic politics, working on everything from the Clinton transition team to helping Sen. Dianne Feinstein, D-Calif., oppose the nomination of now-Justice Brett Kavanaugh to the Supreme Court.

In what can only be considered a bizarre claim, Gerhardt’s written testimony asserted that he could not “help but conclude that this president has attacked each of the Constitution’s safeguards against establishing a monarchy in this country.”

Trump is trying to make himself a king? Really, professor? That is supposed to be a persuasive argument?

Gerhardt even resurrected a claim that House Democrats have all but abandoned: that Trump engaged in obstruction of justice by interfering in Special Counsel Robert Mueller’s investigation into possible collusion between the Trump campaign and the Russian government in the 2016 election.

According to Gerhardt, Trump’s behavior is as bad as President Richard Nixon’s.

In contrast, Turley prudently advised the Judiciary Committee to recognize the sparsity of the record before it.

“There is no evidence that President Trump acted with the corrupt intent required for obstruction of justice on the record created by the House Intelligence Committee,” Turley said. He said there is no evidence of a quid pro quo; the evidence does not meet the requirements for proving bribery or extortion; and there are “no good-faith grounds” for arguing that the president violated campaign finance laws.

Democrats would do well to heed the final warning in Turley’s written testimony. If they impeach a president on the deficient record they have established, he cautioned, they will “expose every future president to the same type of inchoate impeachment.”

Turley is right about that. Impeachment for partisan reasons threatens the stability of our democratic republic. The founders would be mortified.