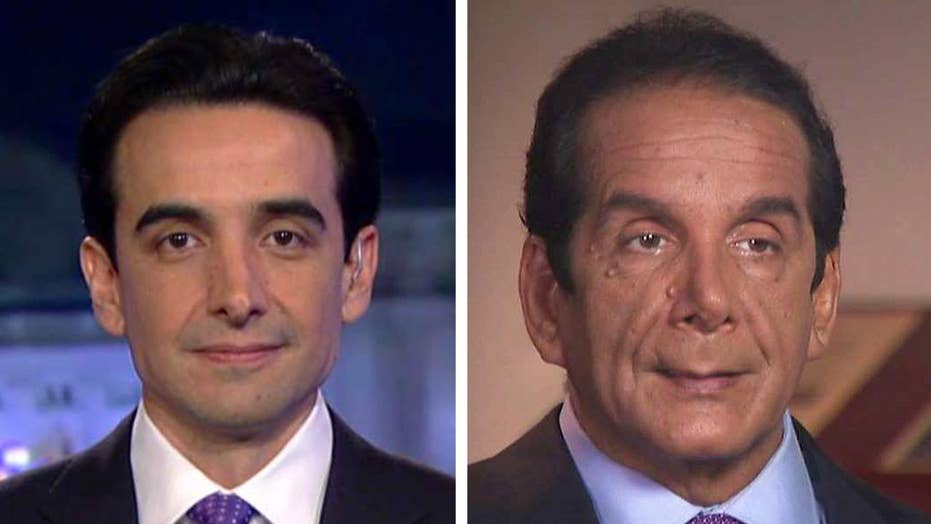 Charles Krauthammer's son Daniel has compiled a book of his late father's work called 'The Point of It All: A Lifetime of Great Loves and Endeavors.'

“Clear-minded and even-handed.” “Reasoned and principles-based.” “A voice of civil debate.” These were some of the terms used to describe my father, Charles Krauthammer, at the time of his passing six months ago. Hundreds, indeed thousands of similar sentiments poured in from around the world – from colleagues who knew him, newspapers who published him, politicians who respected him and, above all, readers and viewers who looked for his voice daily in their papers and on their television sets.

They appreciated his mind and his words. And many, I feel, truly loved him as a man. It has been incredibly moving these past months to meet so many people who felt their lives were touched by his. But I also think that he represented something more ineffable for many people – an example of a certain kind of politics, a mode of discourse that is civil, reasoned and intelligent. One which so many people feel is lacking in our politics today.

My father has not been the only symbol of this mode of politics that we have lost. I myself have felt a deep sense of sadness with the recent passing of Senator John McCain and now of President George H.W. Bush. A refrain I have heard repeated with such feeling at the passing of each of these men is that we are witnessing the passing of an era: an era of civility and mutual respect in politics; an era of patriotism and principle above partisanship and personal gain.

Charles Krauthammer with his wife Robyn at the White House with President George H.W. Bush. (Courtesy of the author)

Part of this, to be sure, is selective historical memory. The partisan battles of decades past were surely not so polite and courtly as we like to think they were. But it does feel as though something has changed. That in our politics today, we are increasingly talking past each other, inclined less to engage in serious debate than to shout slogans and rally those who already agree with us.

We constantly hear calls for more civil debate, more respectful politics. Especially today, after the passing of a president who reflected it so nobly. But we seem to revert back to our old ways fairly quickly. In a political environment where all sides feel under assault and the stakes feel so high, it can be very hard to maintain “civil” discourse. We often associate civility with “being nicer” or “more respectful” or more “open to compromise.” Adopting those attitudes can open you up for criticism of being weak, or not fighting hard enough for your beliefs or – if you’re a politician – for your constituents.

Charles Krauthammer at his desk in 1984. (John McDonnell Washington Post)

How, then, can one be civil without simply falling into some mushy middle position –  how to argue intelligently and fiercely, yet honestly and respectfully?

I believe my father was able to do this, and I think it’s because he recognized that our political disagreements are generally just the topmost layer – a projection, really – of a whole set of arguments, beliefs and assumptions that we build up in our minds throughout our lifetimes. We get nowhere if we just yell “I’m right and you’re wrong.” To make any real headway in a debate, my father once explained, you have to go deeper:

“The one thing I try to do when I want to persuade someone is never start with my assumptions, because if I do, we're not going to get anywhere. You have to figure out what the other person believes, and then try to draw a line from what they believe into what you believe in by showing them a logical sequence. But you’ve got to lead them along and you have to have it clear in your head from the beginning or you'll never get there…. You have to address people where they are.”

I believe this approach was the key to my father’s style of discourse. Friends, acquaintances and strangers alike have told me on more occasions than I can count: “I don’t usually agree with your father, but I love reading him – he makes me think.” Thinking is always the first step to persuading. Hardly anyone will ever change their mind or switch positions in mid-argument. But if you can make them think and open their minds to the possibility that the other side might be right, or at least has a strong point, that’s a first and powerful step in bringing them over to your viewpoint, or to finding a genuine compromise position that combines both sides’ beliefs rather than forfeiting them.

This lesson does not just apply to politics. We live with all kinds of assumptions in our lives that others do not hold. In my father’s posthumous book, “The Point of It All,” he wrote not just on politics, but also on everything from sports and movies and architecture to space exploration and medical ethics and religion. He realized that not everyone shared his passions or his feelings or his opinions on all these subjects. He often acknowledged, for instance, that most people would think him crazy for driving five hours to watch a chess match in New York, or think him childish for caring if his beloved Nationals won the pennant. But his writing is powerful because he highlighted that gap in starting assumptions, and then drew the opposing side in to understand his own argument. He opened his readers’ minds to a way of looking at the world they may never have considered before.

Charles Krauthammer in his office in 2005. (Katie Falkenberg for NYT.)

Consider his essay (one of my favorites) explaining his deep love for dogs, which very deliberately approaches the idea from the assumptions of someone who doesn’t understand it:

“Some will protest that in a world with so much human suffering it is something between eccentric and obscene to mourn a dog. I think not. After all, it is perfectly normal – indeed, deeply human – to be moved when nature presents us with a vision of great beauty. Should we not be moved when it produces a vision – a creature – of the purest sweetness?”

The ability to come to the same conclusion from different starting points is essential to a functioning democracy. If your conclusions are determined from where you start, from who you are in an unchangeable way, then why even have a debate in the first place? Why even vote, for that matter? Why not just tally up the population by our self-identified groups or teams or parties or ideologies and draw permanent battle lines right there? This all too often seems to be the way politics operates these days. We draw a caricature of the opposing side, dismissing their assumptions and focusing our efforts more on stirring the passions of our own side than appealing to the reason of our opponents.

But a healthy democracy must be built not just on power, but on persuasion. The democratic ideal is that citizens from a multiplicity of different backgrounds, experiences, views and opinions can – through debates, elections, negotiations and the rule of law – reach agreements on how best to govern themselves. The very word “civil,” after all, derives from the Latin word civis, meaning “citizen.” We would all do well to take a lesson from those we’ve lost in recent months, and remind ourselves that it is our civic duty to try to persuade, not just to overpower.

Daniel Krauthammer is an independent writer and consultant based in Washington, D.C. His writing has appeared in The Washington Post, The Weekly Standard, National Review and The New Republic. He is the editor of his father's book "The Point of It All."