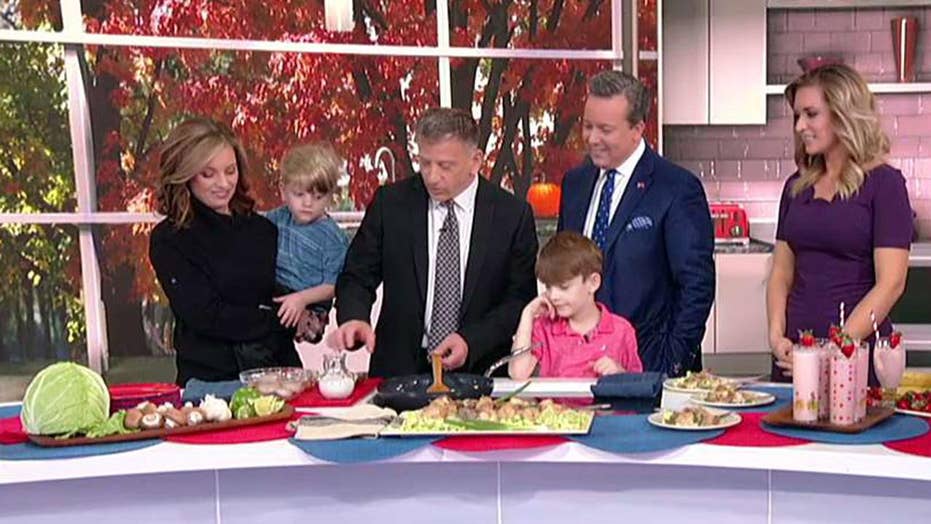 Daniel Hoffman is Cooking with Friends

Fox News contributor and former CIA station chief Daniel Hoffman and his wife Kim and their sons Jerron and Nathan make their Thai shrimp with garlic and aloha smoothies.

In November 2018, my wife Kim, our two sons, and I cooked Thai food and made “aloha” smoothies in a Fox News segment “Cooking with Friends.” No one could have guessed by her appearance and good spirits, that Kim had been fighting pancreatic cancer for two years. Having undergone an arduous Whipple operation after being diagnosed with cancer in late 2016, Kim had just completed her second, six-month-round of chemotherapy a few days before we appeared together on TV.

Just recently she underwent liver resection surgery. Doctors removed the half of her liver, where some of the cancer, no longer in her pancreas had migrated.

In the words of my former boss at CIA David Petraeus, staying “fit to fight” has been critically important to maintaining Kim’s mental and physical edge against cancer.

Even when she was undergoing chemotherapy, which sapped her energy and strength, and caused Kim to feel sick, she continued hitting the gym with her workout team and a demanding but nurturing trainer.

Fighting cancer is like running a marathon except that when the exhausted patient is approaching the finish line, a new and often even more challenging race starts all over again. Finding the stamina to be a parent while engaged in successive cancer marathon treatments, only adds to the physical and emotional challenge.

In High School and college, I competed in sports. I served many years in the Intelligence Community, side by side with U.S. military in some challenging and dangerous overseas locations. I never could have imagined the toughest person I would ever know would be my wife.

Kim rarely complains about simultaneously fighting the disease and healing from the treatment. But when she needs a break, her friends and family step in and keep up the fight on her behalf until she’s ready to fight some more.

The greatest motivation for Kim to beat cancer is by far our two sons, both of whom are deeply aware of their mother being ill even though they don’t completely understand the depth of her cancer diagnosis or its potential prognosis.

Through it all Kim has kept her wry sense of humor. She often tells me she needs to beat cancer because it would be an unmitigated disaster, particularly in the personal hygiene department, if she left our boys in my care alone.

Kim and I agree the most sacred thing we will do on this earth is raise our children. Neither of us could bear the thought of our sons losing their mother whom they love and need so much.

I lost friends and colleagues in the years I served overseas in the Middle East and South Asia combat zones and while serving at CIA headquarters as Chief of the Near East Division. The CIA puts stars on our wall to commemorate our fallen officers, who made the ultimate sacrifice for our nation. As tragic as their losses are, our heroes were knowingly putting themselves in harm’s way to serve a sacred mission.

Cancer, in contrast, is so often cruelly arbitrary. Kim has always lived a healthy lifestyle. She has never smoked, rarely drinks alcohol and exercises regularly.

She never did anything to deserve the mission of fighting cancer, which was unexpectedly thrust upon her.

Since her diagnosis, it is as if a sword of Damocles is hanging over our family. While we hope, pray, and wait for a cure, we rely on today’s options: cutting cancer out of Kim’s body; the chemotherapy, which is so viciously hard on her physical wellbeing; and prayers and support from our friends and family.

What has changed for us more than anything is how we rank our priorities. Most any challenge we face pales in comparison to our ongoing fight for Kim’s life. We revel in our love as a family and sharing what we once might have considered a mundane family routine.

The late Jim Valvano said, “To me there are three things everyone should do every day. Number one is laugh. Number two is think -- spend some time in thought. Number three, you should have your emotions move you to tears. If you laugh, think and cry, that's a heck of a day.”

We like so many other families in the fight against cancer have had a lot of those great days during the past two years and for that, we will always be eternally grateful.