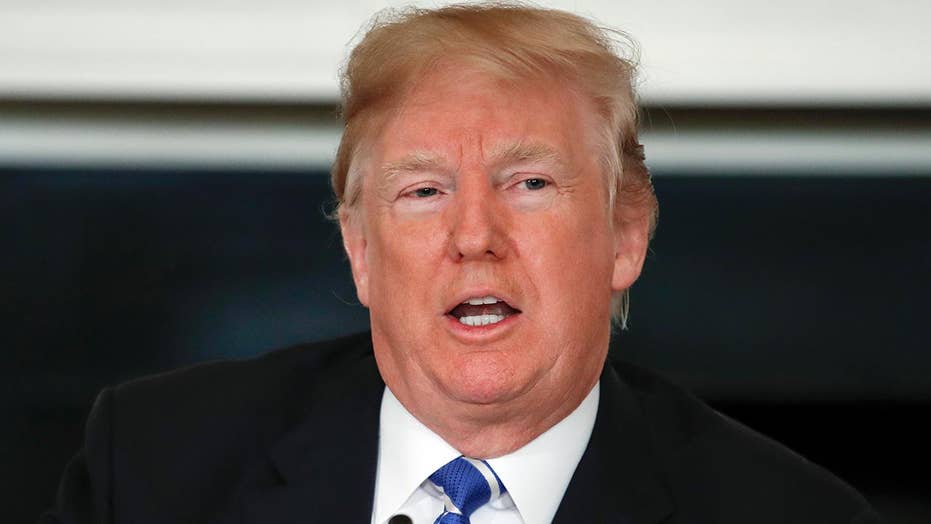 President Trump was right to demand Wednesday that new immigration legislation provide at least $25 billion to secure our southern border, end chain migration that allows legal immigrants to bring their extended families to the U.S., and end a diversity lottery system that gives preferential treatment to immigrants from nations that send few people to America.

The Republican proposal before the Senate that the president endorsed would also grant legal status to some 1.8 million immigrants who were largely brought to the U.S. illegally as children.

While it is natural to sympathize with these young people, that sympathy must be balanced by the reality that any amnesty encourages more illegal immigration, thus threatening to extend the problem it purports to solve.

The president correctly threatened to veto more limited legislation that simply promised to tighten border security (a promise that has gone unfulfilled in the past) and allowed the illegal immigrants brought to the U.S. as children to remain in the U.S.

The Washington Post reported that President Trump and officials in his administration were working Thursday to convince senators to oppose the weaker bill.

The childhood immigrants are currently protected under a program created by President Obama called DACA (Deferred Action for Childhood Arrivals). President Trump has ordered that program ended in March.

However, in response to court challenges, two federal judges have issued orders blocking the president from ending DACA. The U.S. Justice Department is appealing the first of those orders to the Supreme Court.

It is widely expected that the Supreme Court will overturn the district court’s DACA rulings and uphold the president’s right to end DACA, which is similar in structure to DAPA (Deferred Action for Parents of Americans and Lawful Permanent Residents), another Obama-created program that the Supreme Court ruled unconstitutional in 2016.

DAPA, which is no longer in effect, allowed illegal immigrants who have lived in the U.S. since 2010 and have children who are American citizens or lawful permanent residents to stay in the U.S. legally with three-year renewable work permits.

While Pelosi’s speech was not a surprise (it is sadly no longer atypical for Democrats to prioritize the interests of non-Americans over actual American citizens), the question remains: Why are so many Republicans in Congress willing to join her in advocating for DACA recipients without the significant immigration reforms backed by President Trump?

Perhaps it is because people are misinformed, buying the public rhetoric about DACA recipients and ignoring the actual data. Nowhere has the divergence between rhetoric and reality been more apparent than the discussion of the benefits that DACA recipients will bring to the U.S. economy.

As left-wing celebrity astronomer Neil deGrasse Tyson recently wrote in a viral tweet: “Not that anybody asked, but one-third (95 out of 289) of all American Nobel Prizes in the Sciences have been earned by immigrants to the United States."

But Tyson’s tweet, much as it may provide a comforting illusion to leftists and open-borders advocates, is deceptive. Only one of those Nobel Prize recipients in the sciences immigrated from one of the top five countries DACA recipients came from, representing almost 90 percent of DACA recipients  (That one was Mario Molina, the son of a senior Mexican diplomat.)

We need to be realistic about the illegal immigrants who the left wants to magically transform like Cinderella into American citizens before the DACA stagecoach turns into a pumpkin.

Many DACA recipients cannot even speak English fluently, as indicated by the fact that the DACA application form offers space to list the name of the person who translated it for the recipient. But with a few small exceptions, English proficiency is allegedly a requirement for citizenship.

And despite President Obama’s rhetoric that DACA recipients are “Americans … in every single way but one – on paper,” the Center for Immigration Studies has estimated that 70 percent have only “basic” or less English fluency.

Even the pro-amnesty Migration Policy Institute found in its study of DACA recipients that “DACA-eligible workers were more likely to hold lower skilled jobs than US workers overall.”

No wonder that the top economic sectors employing DACA recipients are food preparation and serving, sales, administrative support, and construction – not exactly critical deficit areas for the U.S. economy, unless your goal is to make sure Americans don’t make high wages.

Studies of immigrants with similar demographic profiles to the average DACA recipient suggest that their income and education levels will continue to lag U.S. averages for multiple generations. They’re also likely to be a natural Democratic constituency.

But what is perhaps most frustrating about the GOP’s rush to amnesty is that once they get amnesty, DACA recipients will become eligible for benefits and preferences over many American citizens, a group including both natives whose families have been helped build this country for countless generations and millions of legal immigrants who followed the rules and did things the right way.

Based on their demographic profile, more than 95 percent of DACA recipients will be eligible for affirmative action covering everything from preferential college admissions and job placement to advantaged treatment for government programs targeted at “underrepresented minorities.”

While there have been countless stories written about the allegedly sad plight of DACA recipients “in the shadows” how come nobody is asking why we are giving a lifetime extra preference to illegal immigrants along with an amnesty?

It’s a particularly pressing question to be asked to the pro-amnesty GOP contingent in Congress, which already includes at least 34 House Republicans and eight GOP senators.

If these Republican lawmakers insist on defying the platform that gave their party the presidency and a 100-year high national majority of legislative seats, can they at least promise that they won’t support any amnesty bill that doesn’t ban all future special preferences for DACA recipients?

But at the very minimum, the least anyone calling themselves a Republican could do is not add insult to injury by telling their own voters to go to the back of the bus while prioritizing the wishes of Nancy Pelosi and giving a lifetime of extra preferences to illegal immigrants.

Approximately 90 percent of voters who voted for Donald Trump will be directly disadvantaged if we don’t close the DACA affirmative action loophole. And with the average DACA recipient having a skill level that lags the average American’s, maybe we should think twice before we get on the amnesty train at all.

Wouldn’t it be great if all Republicans in Congress considered the dreams of their own constituents to be as important as those of illegal immigrants?

Jeremy Carl is a research fellow at the Hoover Institution, Stanford University. Follow him on Twitter @jeremycarl4.