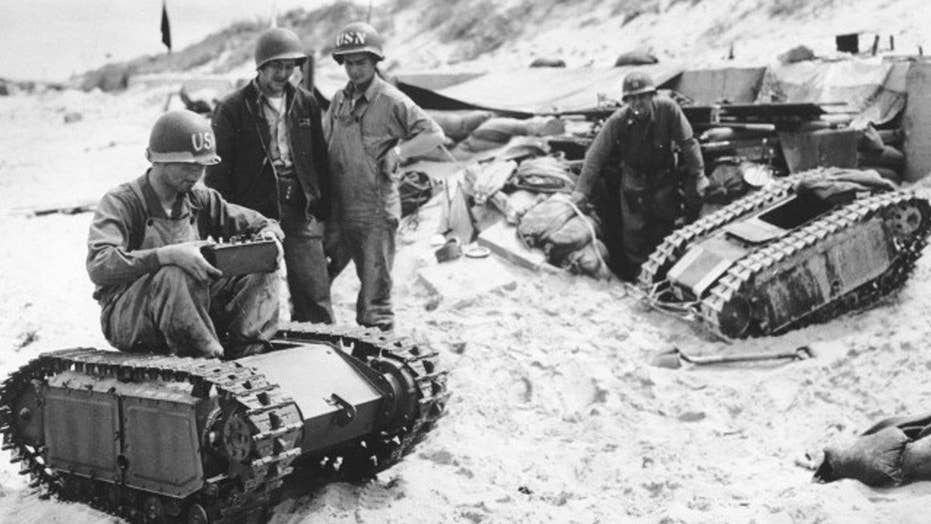 The United States faces daunting international challenges. Uncertain strategic objectives, questionable alliances, and fuzzy policy goals make it seem as though we are spread too thin everywhere to be effective anywhere. It seems that this is new to our times—that our challenges were much simpler in other eras—but during the chaotic years of World War II, the United States was similarly vexed.

While the enemies were arguably clearer then, there were, for example, contentious debates over military strategy and priorities, problematic alliances with China and the Soviet Union, and policy differences on demands for unconditional surrender. What was never in question, however, was America’s resolve to respond with a commonality of purpose and breadth of global reach. Never was this more in evidence than in June of 1944.

On June 4 of that year, Rome fell to advancing Allied forces after almost a year of dogged fighting on the Italian peninsula. President Franklin D. Roosevelt announced the news in a radio address the next day, but gave only a hint of what he knew was even then under way in the skies above the fields of France. By daybreak on June 6, 1944, Allied soldiers, sailors, airmen, and marines under the supreme command of General Dwight D. Eisenhower crossed the English Channel and landed on the beaches of Normandy to begin the long-awaited liberation of Europe.

The weather was dicey, the stakes enormous, but Eisenhower drew upon his personal courage. In an example of fully accountable leadership that is too often lacking today, he scribbled a communiqué to be issued only if the invasion failed. Accepting sole and complete responsibility, Eisenhower wrote that any blame or fault was his alone. Within a week of the June 6 landings, the Normandy beachheads were secure and more than 325,000 troops and 100,000 tons of equipment and supplies stood poised to breakout and race across France to shatter Hitler’s stranglehold.

What made this Allied success at Normandy all the more impressive was that halfway around the world the United States Navy was simultaneously conducting another major amphibious operation—not thirty miles across the English Channel but three thousand miles across the wide Pacific Ocean. Admiral Chester W. Nimitz, commanding a force of 600 ships, landed the Second and Fourth Marine Divisions, backed by the army’s 27th Infantry Division, on Saipan in the Mariana Islands on June 15.

Assaults against the nearby islands of Tinian and Guam soon followed and they became essential bases from which to launch B-29 bomber missions against Japan. Meanwhile, naval aviators decimated Japanese airpower in a free-for-all of aerial combat that came to be called the Marianas Turkey Shoot.

There was equally aggressive and frenzied activity occurring in the Southwest Pacific Theater under the command of General Douglas MacArthur. Beginning with a surprise attack on the Japanese-held Admiralty Islands at the end of February 1944, MacArthur’s forces advanced the Allied front five hundred miles by making a bold leap to Hollandia on the northern coast of New Guinea and isolating major Japanese units. As Eisenhower’s armies swept ashore at Normandy, MacArthur’s air, land, and sea forces were engaged in a struggle for the island of Biak, three hundred miles west of Hollandia and a major step in MacArthur’s long-promised return to the Philippines.

Well aware that the United States and its allies were prosecuting a high-stakes global war, US Army chief of staff General George C. Marshall praised MacArthur’s operations as models of strategic surprise and flexible tactics across the varying geography of the Southwest Pacific. Advising MacArthur that he was off for England to inspect the Normandy landings, Marshall added, “We are now engaged in heavy battles all over the world which bid fair to bring the roof down on these international desperadoes.”

Coming just thirty months after the attack on Pearl Harbor, the widespread and concurrent operations of June 1944 were the result of a tremendous outpouring of America’s industrial might in ships, planes, tanks, and other armaments and their effective use by millions of brave and determined men and women at home and around the world. They did not take “no” for an answer and failure was not an option. In 1943 alone, American steel plants and shipyards built 1,949 ships and 68,600 aircraft.

For years as I grew up, my grandfather—too old to serve himself, but well aware in 1944 that his eighteen-year-old only son was about to deploy to the Pacific—told me the same thing on every anniversary of D-Day: “that’s the day we knew we were going to win.” Indeed, all the events of June 1944 are evidence not only that victory was within sight but also that nothing was impossible given American resolve and a determination to win. Eisenhower in Normandy, Nimitz in the Marianas, and MacArthur in New Guinea—backed by millions—proved that.

Global leadership is not easy. The challenges are varied and continuous and responses carry with them lasting ramifications if not irrevocable consequences. The feeling of being spread too thin is real. But on this anniversary of D-Day and the tumultuous month of June 1944, the reality is that America has been there before.

We responded in dramatic fashion thanks to strong leadership and a will to win and proved the United States capable of engaging boldly and effectively on multiple fronts throughout the world.