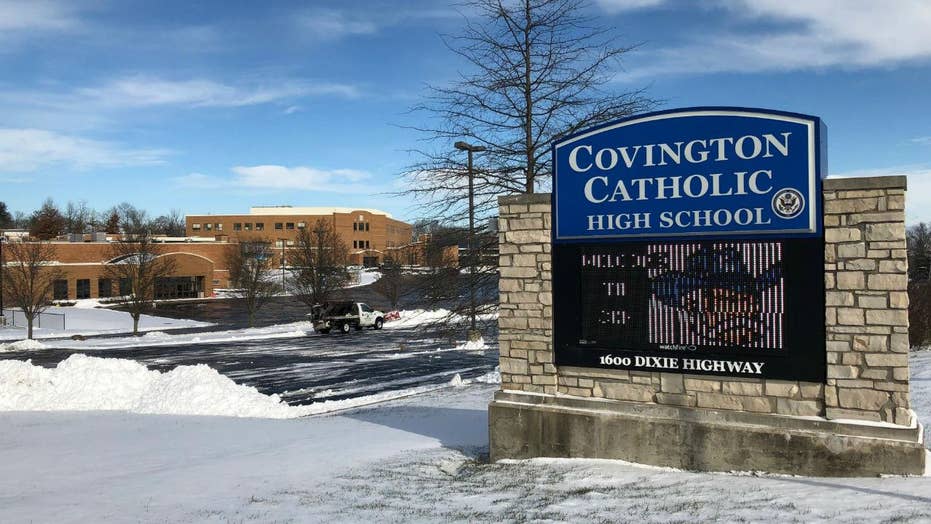 Threats plague the community after an encounter between Covington Catholic students and Native American activists goes viral; Doug McKelway reports from outside the Diocese of Covington.

The video spread as fast as wildfire and the students were harshly condemned. It was covered by the media on television, radio, in print and of course online. The school quickly announced that it would suspend the student(s) involved for their alleged behavior because it violated the Covington School’s code of conduct. The mayor of Covington even publicly condemned their behavior.

But the edited video didn’t tell the whole story.

After the initial rush to judgment, more videos surfaced – unedited videos. And what these videos showed was a small group of African-Americans who call themselves Hebrew Israelites hurling hateful things toward this group of high school students and anyone else who passed by. They called the students “crackers” and “pompous bastards,” and they called a priest walking by a “child molester.” The students did not react with force or violence or even insults. Instead, they asked permission to sing and chant their school spirit song in response, which is what they did, and what the video shows.

But there was one student who was singled out – one student that stood still as Nathan Philips came up to him and stood face-to-face. That student was Nick Sandmann. Nick smiled, or smirked as some would say in headlines and on social media. And just as fast as that video went viral, so did the attacks on this 17-year-old high school student.

It takes a village to raise a child, we just don’t expect that village to turn on our child, even if we think his actions are bad.

Author Reza Aslan, someone whom I have interviewed on my radio show and whose writing I normally respect, tweeted: “Honest question. Have you ever seen a more punchable face than this kid’s?" Kathy Griffin asked for “names” on Twitter and asked people to shame these children.

And that is when it sunk in for me. These are children. Nick Sandmann is a 17-year-old boy. As the mother of an 11-year-old boy, I thought, this could be my child the world is attacking. And those hurling insults, those standing in the faces of these children, those on television reporting about them and commenting about them, those on Twitter threatening them with disturbing, frightful, vitriolic statements – those people are all adults.

It became, as Daniel Payne of the College Fix put it in an op-ed for USA Today, an “online mob mentality.”

So why was Nick Sandmann singled out? And why was the edited version of the video immediately believed?

So many of us, myself included, rushed to judgment. Was it because these kids were white, wearing red MAGA (Make America Great Again) hats? Do we believe anyone wearing that hat is consumed with hate? Do we really believe that everyone who wears a red MAGA hat is incapable of being tolerant? Even when, or especially when, it’s a group of high school students? Or children?

Was Nick singled out not only because he was “standing his ground” face-to-face with the Native American elder chief, but also because his mother blamed “black Muslims” for the incident, even though black Hebrew Israelites practice Judaism and Christianity? Was it her prejudicial statement that made one assume her son feels that way too? Why not attack her, rather than him? At least she’s the adult.

Now I want to be clear. These kids aren’t 100 percent innocent. There is video footage of some of the male Covington students heckling a female. And the students in the video footage can be seen making a tomahawk chop gesture – something offensive to Native Americans and others.

But none of this, in my opinion, excuses the behavior of adults worldwide. As a parent, I know I would defend my child at all costs. Our rush to judgment could have resulted in a different outcome. How many of you have thought about that?

It takes a village to raise a child, we just don’t expect that village to turn on our child, even if we think his actions are bad. I was wrong. So many of us were. Maybe we need to count to 10 before our fingers hit those keys. Or maybe we the adults are the ones that truly need a time out.