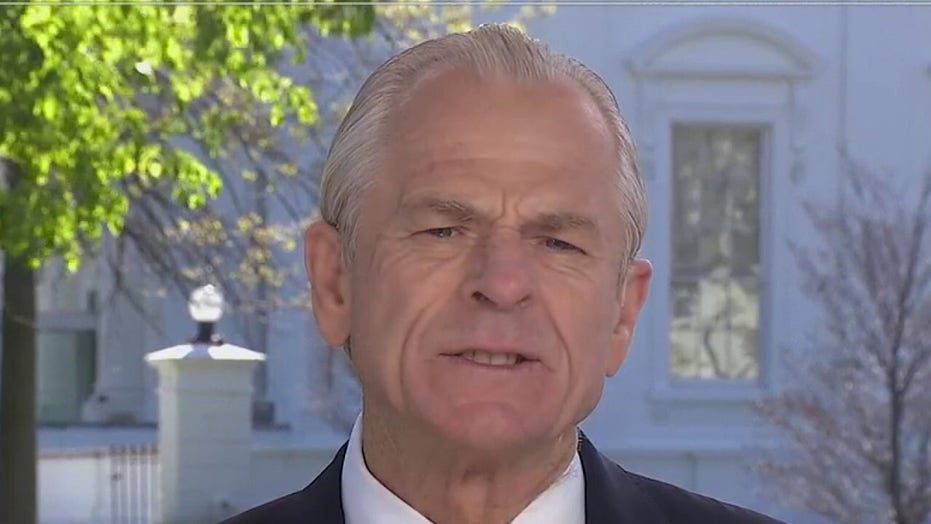 Peter Navarro: How China is now profiting off COVID-19 pandemic

Peter Navarro, White House Trade Adviser, explains how China hid coronavirus behind the shield of W.H.O. and now are profiting off the pandemic

Communist China has been the biggest beneficiary of globalism. China's economy has experienced nearly three decades of double-digit growth, thanks to the open access to international markets and billions of dollars of foreign direct investments in the country.

Globalism has helped to lift millions of Chinese people out of poverty, yet it failed to turn China into a more open and free society. Instead, globalism has enriched the Chinese Communist Party (CCP), strengthened the party's control and oppression of the Chinese people, enabled the party to export its statism around the world and greatly expanded China’s geopolitical influence.

However, it seems globalism may be on its way out because of the COVID-19 outbreak.

HARRY KAZIANIS: COSTS OF CORONAVIRUS — CHINA MUST PAY FOR ITS MISDEEDS, START WITH THESE 5 STEPS

On the political front, globalism advocates for open borders and a free flow of people across nations. Yet, the CCP's early coverups, delays and suppression of whistleblowers of COVID-19 have turned a containable situation into a worldwide pandemic, which placed two billion people under some form of quarantine. Many nations, including the U.S. and China, issued bans for international travel and others have resorted to sealing their borders.

When the pandemic eventually ends, it’s impractical to expect all of these restrictions to automatically go away, as scientists have warned that the coronavirus could be cyclical and return in the fall. Given how contagious this virus is, if it does come back in the fall, governments around the globe will re-impose travel restrictions and tighten their grip over border control.

However, the way the World Health Organization (WHO) peddled Beijing's propaganda and let Beijing's political interests dictate the organization's messaging and response to the COVID-19 outbreak, which likely delayed countries worldwide from taking effective actions to contain the spread of the coronavirus, demonstrates the danger of putting blind faith in international organizations. President Trump announced that he would halt U.S. contribution of $893 million to WHO while U.S. officials conduct a review “to assess the World Health Organization’s role in severely mismanaging and covering up the spread of the coronavirus."

The investigation and the suspension of funding to WHO is just the beginning. Beijing has spent years cultivating its relationships with and influences over international organizations. Despite its troubling human rights records, Communist China recently joined the United Nations Human Rights Council and will play a key role in selecting human rights investigators. The U.N. Watch, a human rights watchdog, deemed Beijing's appointment "absurd and immoral." WHO is in the spotlight right now because of the coronavirus outbreak. However, when the pandemic ceases, more international organizations and their cozy relationships with Beijing will be subjected to strict scrutiny like never before.

On the economic front, the pandemic will likely be the straw that breaks the back of globalization. The two-month lockdown in China has also shut down production of China-based factories and businesses, which forced many nations, including the U.S., to finally realize the vulnerable situations they are in due to their economic dependence on China for all things ranging from medical equipment to life-saving drugs.

Beijing's recent actions have also shown that it is not a reliable partner. It treats this current global health crisis as a public relations problem. It has aggressively deflected blames, spread disinformation about the origin of the virus, continued to underestimate the number of cases and deaths in the nation and exported faulty medical supplies to other countries. These actions have further eroded other nations' and businesses' confidence and trust in Beijing.

On the economic front, the pandemic will likely be the straw that breaks the back of globalization.

Due to the trade war between the U.S. and China, multinational corporations, since 2019, had already begun to shift their supply chain and factories out of China to either bring them home or to other developing countries. The supply chain disruptions caused by the lockdown during the pandemic will only accelerate this global shift and restructuring. Now, even some governments are offering financial assistance to incentivize their businesses to leave China.

The Japanese government recently announced that it would allocate 220 billion yen ($2 billion) to help China-based Japanese companies shift production back to Japan and 23.5 billion yen for those seeking to move production to other countries. Larry Kudlow, White House national economic director, also openly stated that the U.S. should "pay the moving costs" to get American companies out of China. When the pandemic is over, expect to see more nations and companies reduce their reliance on China.

In addition, there is a serious concern that the European Union, which has served as an ultimate symbol of globalism, may not survive the coronavirus. The outbreak has deepened the political and economic tensions between the hard-hit southern nations such as Italy and the bloc's financially sound northern nations such as Germany.

After days of squabbling, the eurozone finance ministers from northern nations refused to share the burden of public debts that their southern neighbors incurred from dealing with the health care needs and the economic fallout caused by the months-long lockdown. Italian Prime Minister Giuseppe Conte warned that if Italy, the third-largest economy in the EU, collapses under the weight of the outbreak, it would have to abandon the EU and "everyone is on their own." Should that happen, the EU would fall apart.

There is no doubt that we will find a way to contain COVID-19 and this global health crisis shall pass someday. But our world will never be the same after the outbreak and globalism, as we knew it, may be gone forever.