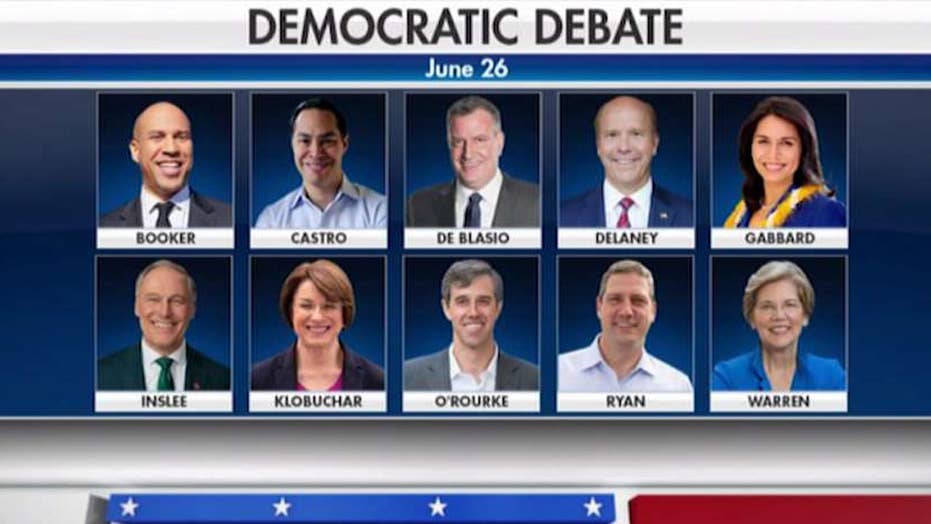 First Democratic debate to be held over two nights

Greg Gutfeld says you gotta get loud to stand out from the crowd.

If I were Democratic National Committee Chairman Tom Perez, I’d be longing for the days of late 2015 when I had only five (really two) candidates to arrange on my stage.

Wednesday and Thursday’s first round of Democratic debates will show America for the first time the entire field of candidates vying to unseat the most successful president in modern history.

Expect three things throughout the debate: an embrace of failed socialist policies of the past, a race to the left to rile up the core of the party’s base, and a targeting of the already embattled supposed “frontrunner” of the primary, Joe Biden; even on Wednesday when he’s not actually on stage.

At this point, we’ve heard all the main promises this crop of candidates is bringing to the table. On health care, it’s “Medicare-for-all,” poised to eliminate private insurance companies covering 67.2 percent of Americans in favor of a government-run, single-payer system. 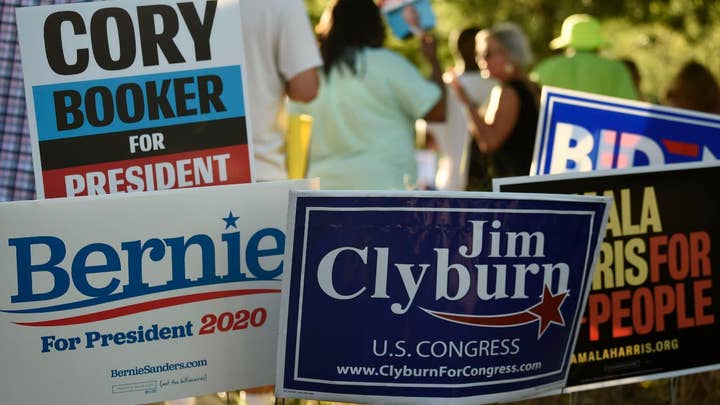 On the economy, it’s undoing the pro-growth deregulation initiatives of this administration and ending the Trump tax cuts that provided economic relief to more than 90 percent of Americans. And for the planet, of course, it’s the Green New Deal, guaranteeing “economic security” to those “unwilling to work” and costing American taxpayers as much as $600,000 per household, or $93 trillion overall.

If some of these ideas seem out of touch with the kitchen table issues of today, you’re right: they are.

Regardless, all these policies will probably make an appearance when Sen. Elizabeth Warren, D-Mass., stands as the only major candidate on stage Wednesday night as she pitches her vision to the nation.

She’s been surging in the polls as of late, chasing down Sen. Bernie Sanders, I-Vt., as the progressive and democratic socialist camps of the party start to see that only one of their candidates can make it through the primary. In a race where the “frontrunner,” Joe Biden, has a public history of being excessively touchy around women, perhaps it’s time, as voters see it, for a woman to put him in his place.

But that all remains to be seen. There’ll be nine other candidates on the stage too, Wednesday night, some of them I’ve heard of. Expect most to follow a similar strategy in the 30 seconds each one gets to speak of telling you how bad the president is and how all of America’s problems can be fixed by giving illegal aliens health care and spending trillions to fight climate change. You know, the best solutions to the most pressing issues.

Thursday night, however, is when it gets really fun. Sanders, Sen. Kamala Harris, D-Calif., Mayor Pete Buttigieg and six others will all get their chance to make their case to the nation about what a nominee should NOT be like while looking directly at Joe Biden, standing at center stage.

Poor ol’ Joe is starting to remember just how tough the business of politics is, particularly today. Even the mainstream media won’t cut him a break over his praise for controversial senators, his relationship with Ukraine, and his son Hunter’s activities relating to a China-sponsored investment firm.

There’s no doubt that each of the major candidates (and everyone else) will have their sights set on Joe. Why wouldn’t they? The former vice president is leading the Democratic pack by every conceivable metric if you believe the polls.

But with a party base lurching ever further to the left set to judge the “frontrunner” who prides himself on decades of bipartisan compromise, there’s plenty of time for a different, more “woke,” candidate to capture the heart and soul of the Democratic Party.

Even better news for the three senators and Mr. Mayor is that the biggest threat to Joe Biden's appeal -- Joe Biden himself -- never leaves the former vice president. Watch for the anticipation in the other candidates’ eyes as Biden starts to speak Thursday night.

If they can just wait long enough, he’ll say something careless, guaranteed, and the politically correct feeding frenzy will begin.

As you watch the candidates try to out-left each other on stage and in the media over the next few months, just remember what President Trump has done over his first three years in office: new highs in GDP growth, record-low unemployment for women, African-Americans, and Hispanic Americans, renegotiated trade deals that put the American worker first, unleashing American energy, strengthening national security, and projecting American strength across the world.

America is better off today than it was before Donald Trump took the oath of office. Whoever becomes the nominee is going to have to contend with that fact. But with a brutal primary campaign standing in the way and nearly 500 more days left of President Trump following through on his promises to the American people, the eventual nominee certainly faces a long, long road.