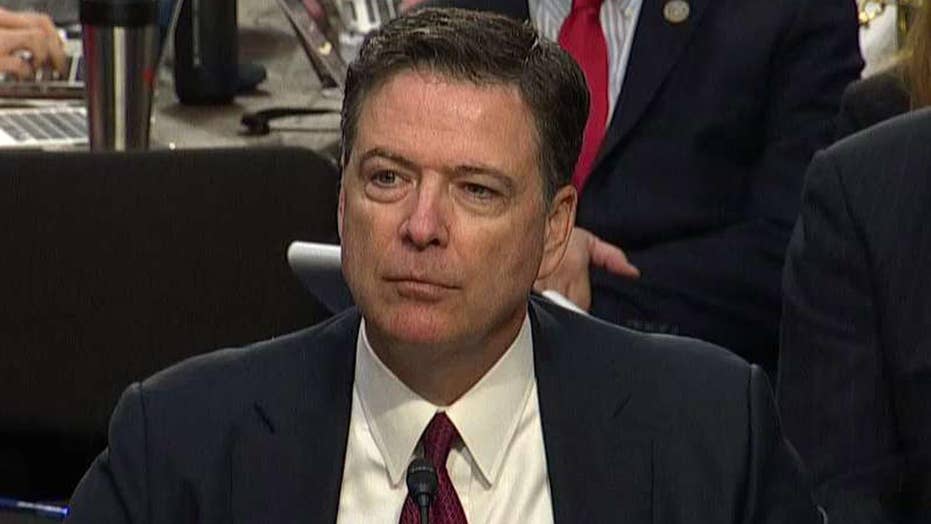 Comey: I asked friend to share memo contents with reporter

Former FBI director testifies that decision was made after Trump tweeted about tapes, says he thought content might prompt appointment of special counsel

If you believe the news media, today’s hearing with former FBI director James Comey was the Super Bowl of scandals. Major media outlets organized pregame coverage with CNN pushing the idea that the day should have been a “national holiday.” Fans even set up watch parties, or worse, yoga watch parties.

The humor site Babylon Bee cut through the left-wing/right-wing narratives better than most in the press. “Breaking: Comey Hearing Confirms Whatever You Already Wanted To Believe.” That couldn’t be more true.

Journalists and pundits on both sides worked hard to prove Babylon Bee correct. Conservatives criticized both the press for getting facts wrong, Comey for blatantly leaking and the media for the ceaseless feeding frenzy. At least three outlets have had stories proven wrong from this one event. At one point,  Comey referred to the press in classic terms, saying he didn't share a memo with the media because, "I was worried it would be like feeding seagulls at the beach." Seagull photos briefly flocked to Twitter, providing one of the day’s few lighter moments.

The traditional press went after President Trump and, of course, conservatives. Former-conservative-now-CNN-attack-dog Oliver Darcy tweeted criticism of conservative media, saying “Breitbart going full Breitbart today for Comey hearing coverage.” He clipped an image of the top Drudge headlines with a snarky summation. “DRUDGE just updated his headlines -- this is a good rundown of what narrative in pro-Trump universe will be like.” He didn’t note that his new employer CNN certainly gave a good rundown of what narrative in anti-Trump universe was like.

But despite the press celebrations of doing what they perceived was harm to Trump, some of the damage fell squarely on them, especially The New York Times. Comey directly contradicted a February Times story that was headlined, “Trump Campaign Aides Had Repeated Contacts With Russian Intelligence.”

Early in the hearing, Comey said, that report, “is not factual.” When the issue was raised again later, he called it, “almost entirely wrong.”  The Times gave the most generic of statements: “We are looking into James Comey's statements, and we will report back with more information as soon as we can.” Imagine the outrage if this had been a conservative outlet.

Later, a Times spokesperson stood by the story: "Subsequent reporting by The Times and other media outlets has verified our reporting," reported NPR media correspondent David Folkenflik.

Comey’s testimony confirmed that he was incredibly focused on massaging the press -- even leaking information to a friend who is a law school professor. HuffPost senior media reporter Michael Calderone reported that, “Columbia law professor Daniel Richman confirmed to me he was the Comey ‘close friend’ who shared contents of memo with reporter.”

Even by D.C. standards where leaking is a religion, it was shocking. Times chief White House correspondent, Peter Baker, admitted, “Can’t remember the last time someone in DC openly acknowledged orchestrating a leak — and without any senator having even asked.”

CNN’s take was … to blame conservatives. The network’s anti-conservative media attacker Brian Stelter wasted no time in saying how Putin had won the day. “Russian propaganda outlets are loving this today,” he argued. Why? Because Stelter says leaks are good and worrying about them is a “talking point for conservative media.”

CNN also had to correct a previous report of its own. According to The Hill: “CNN has corrected a Tuesday report after the release of former FBI Director James Comey's opening statement for his Thursday testimony in front of the Senate Intelligence Committee contradicted the report's sources.” The Hill said ABC had produced a similar report but hadn’t yet corrected it.

The network acted like a 2-year-old before Christmas, devoting more than 10 hours of coverage to testimony before it happened. It even featured a "Comey Countdown” logo three days before the hearing. Maybe next time they’ll get a beer company to sponsor it.

Like all big media events, the Comey testimony was filled with bias big and small. In one of the most ridiculous media moves, Axios (don’t worry, only insiders read it) put the image of President Trump on all three corners of a fidget spinner and had it spinning away under the provocative headline: “1 big thing: Comey truth bomb.”

But for all of Axios writer Mike Allen’s hyperbolic writing style, there was one”big thing” about Comey’s pre-released statement: “But it presents no new information that proves a crime.’

Axios left out the obvious. Then why are we having this stupid hearing? Oh yeah, because the media are working in concert with the most-radical elements of the Democrat Party to overturn the election result. Even if they fail, they hope to kneecap his administration and prevent anything from getting done, hiding it beneath a cloud of supposition and allegation.

When it comes to wild-eyed speculation, there were few worse than disgraced CBS anchor Dan Rather. He went on MSNBC’s "Hardball" before the hearing, calling the event “a code red situation” for the United States. For a man who couldn’t handle the truth like Rather, it’s hilarious to see him invoke A Few Good Men.

The fact that the media have tried to resurrect Rather’s career to attack Trump shows more about the embarrassing state of journalism than the state of Trump’s America.