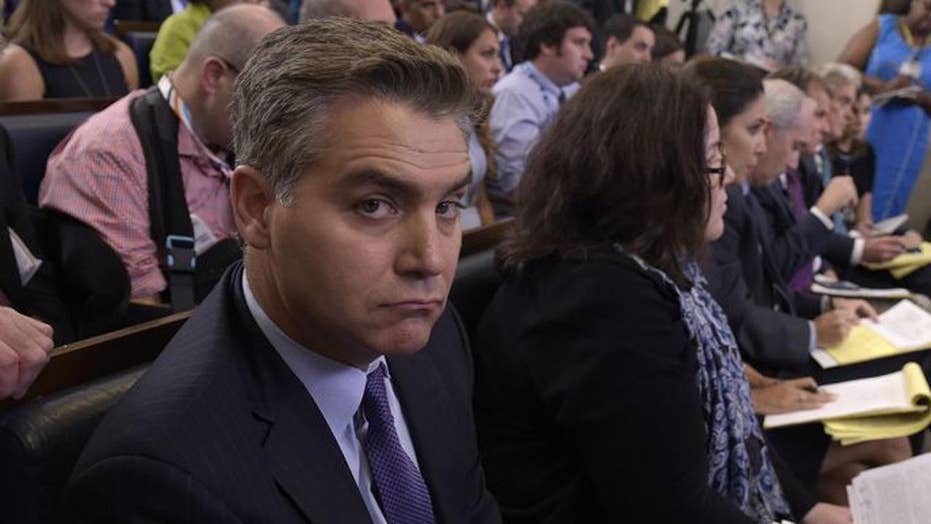 In briefing room showdown over immigration

The first rule of Journalism Fight Club is: Don’t totally embarrass yourself or your employer, especially on TV.

Then there’s Jim Acosta. CNN’s White House correspondent doesn’t seem to care about all that stuff. He left journalism and moved into combative, left-wing activism. Only he still claims he’s a reporter. What’s worse is that his bosses seem to embrace his antics as he embarrasses himself, his network and his industry.

This week, in his role as CNN's senior White House correspondent, Acosta pretended to teach Trump adviser Stephen Miller that what is written on the Statue of Liberty outranks the rule of law. Like a typical liberal, Acosta was all about the feels, as he took after Miller.

Miller smacked him down repeatedly in a slightly more than 7-minute exchange that accomplished two things. It boosted Acosta’s ego, if that’s at all possible, and it proved Trump’s complaints about the press true in hilarious fashion.

Here’s how the bout began: “What you're proposing here, what the president's proposing here, does not sound like it's in keeping with American tradition when it comes to immigration,” said Acosta. He then began quoting from the poem on the Statue of Liberty like it had the force of law, somehow confusing a statue with a statute.

Miller dodged and threw a few jabs of his own. The two of them went back and forth several times with Acosta repeatedly interrupting, which is his style. That lasted until Acosta truly left himself open for a knockout punch. He accused the administration of racism and revealed his own, well, racism. (Here’s the transcript from CNN itself and the video, which is priceless.)

Acosta started talking green cards and such and then had this epic sentence. “And, yes, they may learn English as a second language later on in life, but this whole notion of, well, they could learn -- they have to learn English before they get to the United States, are we just going to bring in people from Great Britain and Australia?”

Point of fact, English is also the official language or de facto language for much of the world, including India with 1.2 billion people, about ⅙ the world’s population just there. And a bit more than Australia and Great Britain.

It didn’t end there. Acosta took his battered ego back to the network to hear the cheers from The Resistance crowd. There co-host Chris Cuomo tried to recap the fight and pretend Acosta had won. It was like trying to pretend Apollo Creed had beaten Ivan Drago while Creed’s body lay motionless on the canvas.

Now on to the other worst stories of our week -- and there were plenty to choose from.

2. Journalists Don’t Understand Immigration: Acosta was far from alone. Others in the news media tried to pile on to support the near-universal globalist view of journalists. Politico (D-DC) decided that when Stephen Miller accused Acosta of “cosmopolitan bias,” that was anti-Semitic code.

Only one problem, Miller is Jewish.

That should be a big problem since Politico ran close to 1,000 words to accuse Miller of anti-Semitism for using the word “cosmopolitan.” Can you imagine if he ordered the drink, too?

The story, headlined: “The Ugly History of Stephen Miller’s ‘Cosmopolitan’ Epithet,” delved into cosmopolitan and how it’s “a cousin to ‘elitist,’ but with a more sinister undertone.” Politico went so far to use that word choice to tie Miller to “Soviet dictator Josef Stalin.”

3. What Goes Up … Won’t Get Talked About: The Dow just hit 22,000 and has set 31 record highs since Trump took office. In all, it’s jumped more than 10 percent in just about seven months. Not too shabby. But I bet you haven’t heard much about it. The reason is it doesn’t fit the media agenda.

That agenda was set the day after the election by journalism’s favorite economist, Nobel Prize winner and New York Times columnist Paul Krugman. As he struggled to cope with Trump’s victory, Krugman told the world his economic prediction: “If the question is when markets will recover, a first-pass answer is never.”

Imagine if you invested based on that, sold your stocks and prepared for the Trumpocalypse. You’d have lost a ton of money. So naturally, those record-high stock days don’t make journalists too happy.

All three broadcast networks censored those highs 80 percent of the time. Imagine sitting in front of your TV, eager to see how the networks covered each of those 31 highs. Twenty-five times you would have found nothing -- even if you DVR-ed all three evening newscasts.

So when the president talks about good news in the economy, remember that stocks mean money in the pockets of investors, retirement funds, pensions and more. It just seldom means news stories.

4. A News Event To Keep The Left Happy: What do you call the star of a new documentary that gets an hour on CNN to promote the film? A liberal Democrat. In this case, former vice president Al Gore got the star treatment. He teamed up with liberal moderator Anderson Cooper to present an hour-long promo for An Inconvenient Sequel.

It was just one of many recent examples where the news media have been promoting his efforts. MSNBC’s All in with Chris Hayes did its part. MTV launched one of the most-boring events in recent TV history with its own town hall. CBS This Morning, The Daily Show, Vice News Tonight, NBC Nightly News and on and on. They all joined in with the promo tour which got air time than most commercial buys. Only this was free.

Free publicity. Lots of it.

It’s not to promote a movie. It’s to push an agenda. Gore’s agenda. The media’s agenda -- to keep the U.S. in the global climate non-treaty so we can ship billions of our dollars to the third world. Remember, journalists are globalists. They love expunging their guilt with your cash.

One of the best things about the town hall was Gore admitting he had been in Seattle the day before. That means he flew nearly 3,000 miles to New York to tell us not to use fossil fuels. Gore has a long history of energy and climate hypocrisy. He also got accused of using “at least 21 times more energy than the average American,” according to The Hollywood Reporter.

Somehow that wasn’t the focus of a CNN town hall. I guess they didn’t have the energy.