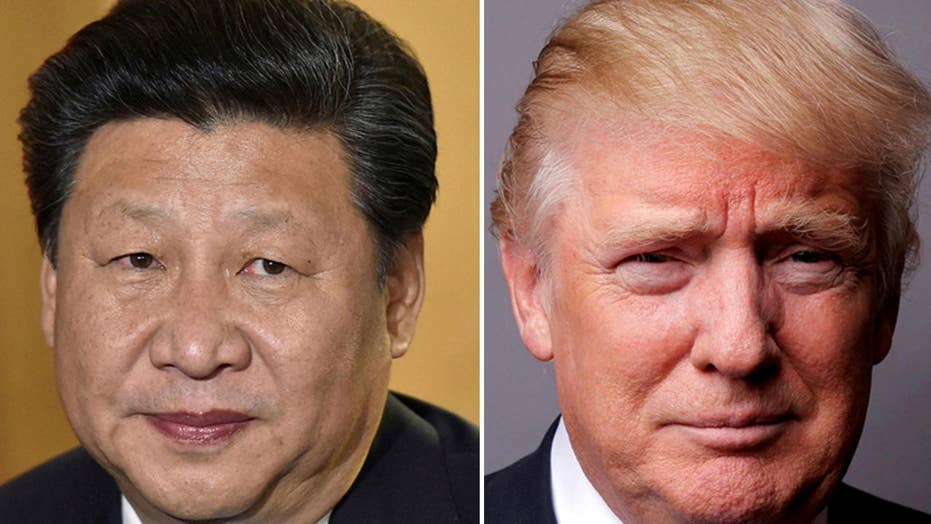 President Trump: We are not in trade war with China

Fears of another trade war spooking the stock market; Greg Palkot with the latest from London.

The Trump administration clearly accepts as fact something that many of us in the national security community have been arguing for a long-time: China is no friend of the United States. It is a tough geopolitical, economic and diplomatic competitor and our competition is intensifying.

But despite the magnitude of the challenge, President Trump was right to take China on – no matter what action the Chinese take to push back.

Washington and Beijing were always set to clash, but such a struggle has been deferred time and time again. We need to accept now that there is no more common ground to preserve, no more common enemy to rally against, and that trade is not the elixir it once was – but rather part of a larger struggle likely to last for many decades.

To understand this challenge, a little history lesson is in order. In the 1950s and much of the 1960s, American commentators referred to Beijing as “Red China” or “Communist China.” The nation was an ally of the old Soviet Union and no friend of Washington. We feared China would spread Communism throughout Asia, and countries would fall into the Chinese orbit like dominoes.

U.S. fear of spreading Communism – “the Red Menace” some called it – was a big factor in our involvement in the long and costly Korean War and the War in Vietnam, fighting forces backed by the Chinese.

It was not until President Nixon visited China in 1972 to try and change the balances of forces against the Soviet Union that U.S.-China ties warmed. However, the two nations did not establish full diplomatic relations until 1979.

But there was always a catch to U.S.-China ties. Ask any national security strategist at the time and they would tell you that such ties were predicated on trying to contain the Soviet menace and would likely return to a much more competitive phase if Moscow was defeated.

In fact, archival research I have done shows that Chinese defense experts in the mid-1980s were already thinking of ways to modernize and shift their military planning to counter a growing challenge from the United States in Asia, as they saw the Soviet Union starting to weaken.

And history proved correct. Just a few years after the Soviet Union collapsed, China and America were battling over the fate of Taiwan during a protracted spike in tensions between1995 and 1996.

Taiwan was determined to become a democracy – something China saw as an existential threat.

China began large-scale military exercises to intimidate the island nation, with Washington responding by sending aircraft carrier battle groups to the region to ensure Taiwan’s safety and prove to Beijing that Washington would protect its ally.

While China backed off, Chinese officials were outraged, for they knew, at least at the time, that they had no way of countering America’s military or economic power in a protracted struggle. In fact, China’s military was so weak that it could not even find where America’s carriers were operating in the open seas, not far from the Chinese coast.

But, as happens in history, current events conspired to delay a great power rivalries. First came the Sept.11, 2001 terrorist attacks. This pushed the George W. Bush administration to move from what at the time was a reconsideration of the U.S.-China relationship to wars in Afghanistan and Iraq.

In addition, Washington gambled that bringing in Beijing to the World Trade Organization in 2001 would moderate China’s geopolitical, economic, diplomatic and maybe even military goals. The thinking at the time was clear: by showing China the benefits of becoming a “responsible stakeholder,” Beijing would play nice in the international system and grow rich and prosperous – and not try to upend the system.

Unfortunately, that thinking was wrong and we have been paying the price ever since.

Millions of American jobs have been shipped to China since 2000. Beijing used this time – what the Chinese refer to as their own “peaceful rise” or “period of strategic opportunity” – to build up their military and economic capabilities, while Washington was busy waging a global war on terrorism.

Clearly, we should not be shocked by the events that are taking place between America and China today. In fact, things will get much more dangerous in the months and years to come.

Considering both nations are on the opposite ends of a regional struggle over issues such as who will dominate the South and East China Seas, Taiwan, the fate of North Korea’s nuclear program and now hundreds of billions of dollars of trade and millions of jobs, we should get ready for the geopolitical and economic reality that is before us.

The facts are obvious: America and China are now enemies. And there is no turning back.