'The Next Revolution' panel discusses Barr's future at the Department of Justice.

Now House Democrats are threatening to hold Barr in contempt of Congress because he hasn’t turned over the entire Mueller report, even though he released 92 percent of the entire report to the public and more than 98 percent to Congress.

What’s the 2 percent not available to congressional leaders? Grand jury information governed by Federal Rule of Criminal Procedure (FRCP) 6(e), which prohibits disclosure of that information, even to Congress.

What’s happening, then, is that House Judiciary Committee Chairman Jerry Nadler, D-N.Y., and his fellow Democrats on the Committee want to hold the attorney general in contempt because he refuses to violate a law passed by Congress! 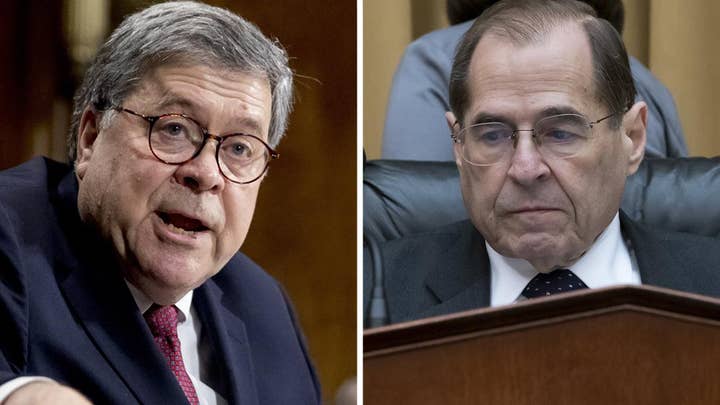 According to the CRS report, the grand jury secrecy rules exist for five principal reasons:

The Democrats believe that they are entitled to the Rule 6(e) grand jury material, most likely because they think that their request falls into one of the categories of exceptions to the Rule’s non-disclosure edict. But the exceptions in part (3) of Rule 6(e) allow only for disclosure to another grand jury; to federal law enforcement, intelligence or national security officials of grand jury matters involving foreign intelligence and counterintelligence information needed by officials in the performance of their duties; or to prevent and respond to threats of terrorist attacks, sabotage or intelligence gathering by foreign powers.

In other words, unless Congress’s request for Rule 6(e) grand jury material falls squarely into one of the statutory or court-created exceptions, the attorney general – any attorney general – is prohibited from disclosing that material to Congress. And the congressional request doesn’t fit any of the exceptions.

That hasn’t stopped members of Congress from sending letters or subpoenas to executive branch officials in the past to try and get grand jury material. Congress has also filed petitions with courts for Rule 6(e) material, but the courts, according to the CRS Report, have “reached conflicting conclusions as to whether the rule of grand jury secrecy…applies to disclosures to Congress at all.”

Court-ordered disclosure of grand jury materials is rare and based on a “novel conception” of Congress’s authority under the “Speech and Debate Clause” of the U.S. Constitution says the CRS Report. Those decisions have been roundly criticized by other cases and law reviews.

As the Heritage Foundation’s Guide to the Constitution explains, James Wilson, one of the principal authors of Art. I, Sec. 6, Cl. 1, said the Speech and Debate Clause was designed to “enable and encourage a representative of the publick to discharge his publick trust with firmness and success…that he should enjoy the fullest liberty of speech.” It wasn’t meant to allow members of Congress to get materials they aren’t otherwise entitled to.

In any event, the U.S. Court of Appeals for the D.C. Circuit ruled only a month ago in McKeever v. Barr that even the federal courts do not have the inherent authority to order the release of material protected under grand jury secrecy.

Furthermore, the Justice Department’s Office of Legal Counsel wrote in a 1985 opinion that proposed legislation that would have authorized “committees of Congress to obtain court-ordered release of matters occurring before a grand jury would violate separation of powers principles by encroaching upon the Executive’s control of prosecutorial matters.” If that bill had become law [NOTE: It didn’t.], it would have codified “legislative encroachment into the Executive’s exclusive authority to enforce the law.”

It is not surprising that Barr is holding the line and upholding the law. Congressional threats to hold him in contempt for abiding by federal law are the very height of arrogance – especially in light of reports these congressional leaders have refused to even read the virtually unredacted report already available to them.

Hans A. von Spakovsky is a Senior Legal Fellow at The Heritage Foundation.  von Spakovsky is the coauthor of “Who’s Counting? How Fraudsters and Bureaucrats Put Your Vote at Risk” and “Obama’s Enforcer: Eric Holder’s Justice Department.”

Charles Stimson is a Senior Legal Fellow at The Heritage Foundation. He is a widely recognized expert in national security, homeland security, crime control, drug policy, and immigration.