When I moved to Virginia, public school quality was top of mind. I wanted schools that would give my kids a quality education, a supportive environment, and a positive community. As a busy, working parent, I needed schools I could trust.

Recently it came to light that numerous Virginia high schools’ libraries included books like a cartoon graphic novel—a genre geared to emerging readers and preteens—with extreme sexual content. This isn’t parents being squeamish about their child’s exposure to the facts of life or to routine sex scenes. This was much closer to pornography.

A parent brought the existence of this book to the attention of the Fairfax County school board, by reading sections out loud that revealed just how obviously inappropriate the content was. The school board pulled the book from the libraries and is reviewing whether it should continue to be carried.

I don’t trust that my local school board will prioritize students' needs over the desires of union workers.

But questions remain: who made the decision to include this book in the library in the first place? If Virginia school boards now decide that this was truly inappropriate material, can we trust that they are reviewing what else is being featured in libraries? Is anyone being held accountable for exercising such poor judgment?

Independent Women’s Voice created an advertisement to raise awareness about this issue—but the ad was rejected as too explicit to run during the 11 p.m. hour on television in Virginia. Why are our schools so much less protective about what high school students, as young as 14, are exposed to than TV stations catering to adults?

This isn’t the only problem with content in Virginia schools. My children routinely endure race-obsessed classes. They’ve taken a quiz that told them that speaking with a British accent was a microaggression and form of racism. They also watched misleading videos about Christopher Columbus in anticipation of "Indigenous People’s Day."

Many parents became aware that something is very wrong with our schools last year, when classes were virtual. Parents like me dutifully logged our kids online and were surprised by what was being taught. We also watched with frustration as Virginia private schools quickly and safely resumed in-person learning, while our public schools remained closed for months and months on end. We now know that our kids suffered tremendous learning losses during virtual learning, as well as from mental health issues due to the isolation and long hours spent staring at screens. 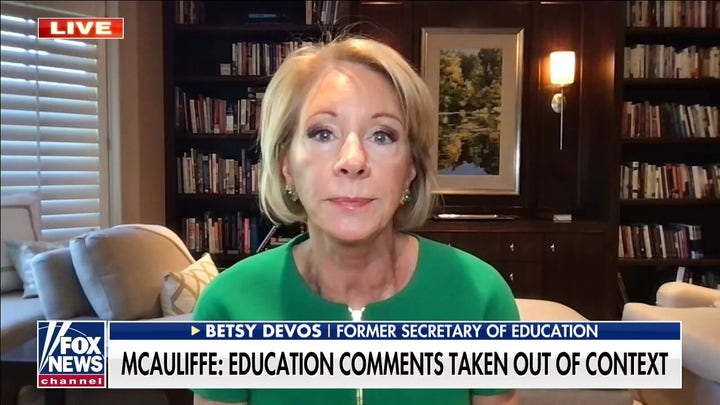 Most recently Virginia parents have learned that school officials in Loudoun County failed to report a violent sexual assault that occurred in a school bathroom, and that the student assailant was placed in another Virginia public school and went on to attack another girl.

Why was this student back in school just a few months after this first attack? How many other incidents has Loudoun County schools failed to report? We have also seen disturbing footage of violence in other schools. Are Virginia school officials committed to actually providing students with a safe environment, even if it is at odds with their political narratives?

Gubernatorial candidate Terry McAulliffe recently said that he doesn’t "think parents should be telling schools what they should teach" and vetoed a bill that would have required schools to give parents more information about sexually explicit content covered in school.

Now Biden administration officials in Washington, D.C. are seeking to label concerned parents as domestic terrorists. What’s going on here? Why is the left demonizing parents and suggesting that we somehow aren’t supposed to be our children’s chief advocate and responsible for ensuring that they grow to be healthy and responsible adults?

Our public school leaders have lost my trust, and I know I’m not alone. Virginia parents—and most importantly, Virginia’s students—deserve better. Virginia law actually states that parents are supposed to have input into their child’s education.

It’s time to make that a reality.

Carrie is a mother of five children enrolled in Virginia public schools.