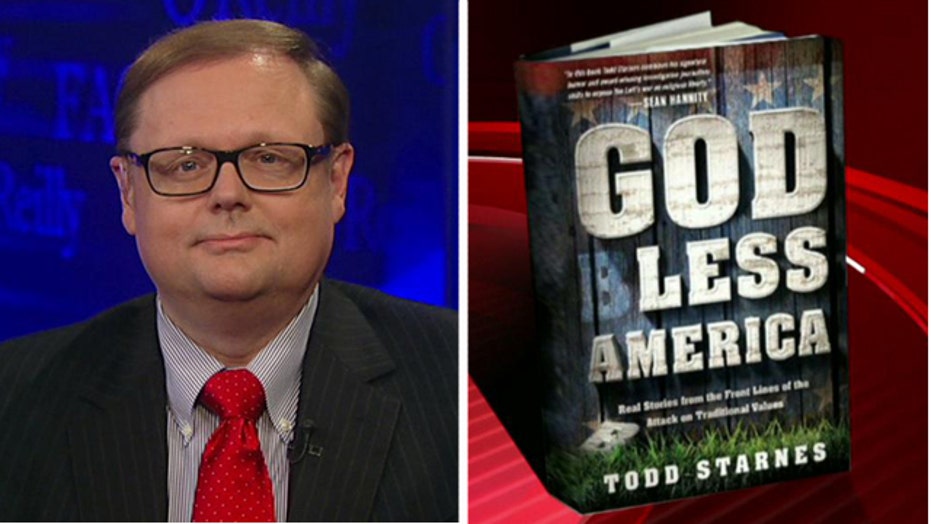 Todd Starnes on his new book ‘God Less America: Real Stories From The Front Lines Of The Attack On Traditional Values’

The White House is waging an all-out assault on religious liberty. Public schools are indoctrinating our children with the gospel of secularism. Hollywood is spewing toxins into our homes. The soundtrack of our lives is a pulsating mix of sex and violence and filth. The American family is in ruins. What was once wrong is now right and what was once right is now wrong.

Our nation stands on a precipice. Freedom hangs in the balance. We live in a postmodern and post-God nation. The perfect storm is brewing. Do not be deceived. There may be a war on religious liberty, but the true target is Christianity.

Tony Perkins, president of the Family Research Council, and Kelly Shackelford, president of Liberty Institute, penned an open letter to the American people last year. Hostility against religious liberty has reached an all-time high, they warned. The freedom of religion is being pushed out of public life, schools and even churches.

“Our Founding Fathers considered religious liberty our ‘first freedom,’ and the bedrock upon which all other freedoms rest,” the men wrote. “They understood that one’s right to worship God and follow his conscience according to the principles of his religious faith was foundational to civic tranquility. A man whose religious faith was repressed could never be a loyal citizen since the state was usurping his first allegiance and costing him his primary freedom. This is one of the most important distinctions that makes America an exceptional nation -- if not the most important.”

Both groups document more than 600 recent examples of religious hostility. Six hundred. American stories. Our stories. Their documentation included many stories I have covered during my career at Fox News Channel.

The Obama administration wants to force religious organizations and Christian business owners to provide insurance for birth control and abortion-inducing drugs in direct violation of their religious beliefs. The military conducted training sessions that labeled Evangelical Christians and Catholics as examples of religious extremists. The Internal Revenue Service launched investigations into pro-life organizations, demanding to know the contents of their prayers.

This is happening right here, right now, in the United States of America. We are under attack from within -- from an enemy who wants to remove any mention of God from the public marketplace.

In recent days, a Florida child was bullied by his public schoolteacher for reading his Bible during “free reading time.” The teacher was recorded on a voice mail message telling the child’s parents that “he’s not permitted to read those books in my classroom.”

Seventh-day Adventist preacher Eric Walsh was suspended with pay from his job as the public health director of Pasadena, Calif., after critics exposed videos of sermons in which he preached that homosexuality is a sin. Pasadena officials told local reporters the pastor was placed on paid leave while they investigate his sermons and determine whether he has the ability to lead a department that he’s headed since 2010.

A while back Rev. Billy Graham penned a letter expressing his dismay over the moral decline of the nation, declaring that his “heart aches for America and its deceived people.”

“The farther we get from God, the more the world spirals out of control,” Graham wrote, noting that the nation seems to be going out of its way to remove God from the public arena. “Just a few weeks ago in a prominent city in the South, Christian chaplains who serve the police department were ordered to no longer mention the Name of Jesus in prayer,” he wrote, noting that officers were only allowed to pray to “the being in the room.”

“Our society strives to avoid any possibility of offending anyone --  except God,” he continued.

The storm clouds are gathering. The winds of revolution are blowing, friends. Religious liberty is under attack.

Years ago the Christian songwriter Steve Green penned a song titled, “Find Us Faithful.” It was a prayer that all who came after us would find this generation of believers faithful. The call still rings true today.

In these early days of the 21st century, the fire is flickering and the footprints are few. Storm clouds are gathering. The winds of persecution are blowing. But friends, no matter how difficult these days have become, let not your heart be troubled.

“If my people who are called by My name will humble themselves, and pray and seek My face, and turn from their wicked ways, then I will hear from heaven, and will forgive their sin and heal their land,” the Scriptures declare.

The most pressing problem facing America can’t be solved in Washington, D.C. True hope and change can’t be found at 1600 Pennsylvania Avenue. It can only be found at the foot of the cross
on Calvary.

It’s time for a new generation of believers to rise up and restore the dream of our Founding Fathers – the dream of a nation where all men are endowed by their Creator with certain unalienable rights. The dream of a people who declare we are still one nation under God.

Author's note: I write about stories just like this in my new book, “God Less America – Real Stories From the Front Lines of the Attack on Traditional Values.” It’s available wherever fine books are sold including Amazon and Barnes & Noble.